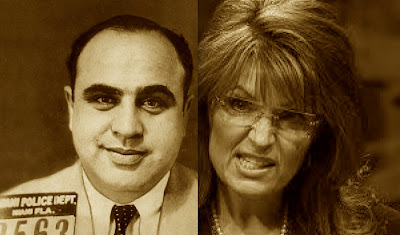 Activist, muckraker and author Malia Litman has filed the following letter with Kevin Seldis, Chief Criminal US Attorney for Alaska:

Thank you for taking my call today. I understand that Karen Loeffer is out of the office and the letter I faxed to her was given to you. Thank you for considering this matter.

I understand that you are very busy, and that this issue of corruption might normally be a state matter. However the fact that the tax credit was issued by the State of Alaska in violation of the express provisions of the law is evidence of corruption. Moreover, because I have brought this matter to the attention of Governor Parnell, and the film office, and they have either ignored my letters or indicated that they see no problem with the issuance of the tax credit, in spite of the fact that Sarah Palin herself has admitted the show was political in nature. Because of the refusal of the Alaskan government to get involved, I IMPLORE you to look into this matter.

I don’t pretend to be a criminal attorney. However a simple reading of internet sites would lead me to believe the Federal Government could get involved. For example The Hobbs Act, by its express language makes it a crime to obstruct, delay, or affect commerce by robbery or extortion. The statute, by a series of judicial decisions, including a United States Supreme Court decision (See, United States v. Evans, 504 U.S. 255 [1992]), has been extended to cover practices best characterized as bribery. In that regard, all that has to be shown is that a public official has obtained a payment to which he/she was not entitled, knowing that the payment was made in return for official acts.

This results in making the Hobbs Act similar to 18 USC §201 insofar as it covers bribery of a federal official. Sarah Palin was paid a substantial amount, over $2,000,000.00, for the making of Sarah Palin’s Alaska, and the company that produced it received $1.2 million in tax credits as a result of a law approved by Palin while she was still the Governor. Not only did she make the show with a political motivation, but she is now indicating an interest in running for President. She has also sought financial contributions through SaraPAC so the show would predictably help her raise money for her PAC. Additionally the tax credit is not available for the production of any film that is detrimental to the people of the state of Alaska, and as set forth in my pervious letter this show was detrimental to the people of Alaska. In addition to the failure to use proper child restraints and seat belts for the adults, and the promotion of teen pregnancy, Sarah Palin’s Alaska promoted unhealthy eating for children. In case there is some question in your mind about the severity of the problem in this country of childhood obesity, see the article out this afternoon regarding the damaging effects on children of unhealthy eating. http://www.dailyfinance.com/2011/05/18/health-experts-attack-mcdonalds-but-can-they-bite-into-its-bot/?icid=maing-grid7|main5|dl1|sec1_lnk3|64222. Sarah’s Palin’s Alaska was both a political advertisement and detrimental to the people of Alaska. Sarah Palin and Jean Worldwide used a state law for their personal financial gain in direct controversion of the law of the State of Alaska.

While I understand that the Hobbs Act is limited to conduct that “obstructs, delays or affects interstate commerce [commerce between two or more states],” this requirement is

negligible effect. Certainly the fact that Sarah Palin’s Alaska was broadcast across the country, and the DVD of the show is being sold in every state in the country, surely that constitutes “interstate commerce.” There may also be a RICO violation as well. As the Chief Criminal US Attorney in Anchorage, I am sure you are more familiar than I with possible Federal laws that have been violated.

Federal prosecutors are “given broad weapons to prosecute public corruption, especially with respect to state and local corruption, where the pertinent statutes empowers them to challenge almost any unlawful, questionable or unethical conduct of a public official.” http://apps.americanbar.org/rol/publications/asia_raca_prof_hutter_prosecuting.pdf. Because it is now obvious that the state of Alaska will do nothing to ensure the refund of the $1.2 MILLION DOLLAR tax credit awarded to Jean Worldwide for the production of Sarah Palin’s Alaska, I implore you to do what you can to bring the offending parties to justice. I stand ready and willing to assist in any investigation you choose to undertake. Thank you for your help.

I love it. Malia is trying to hold the SOA and Sarah accountable. Didn't Sarah just say last night on Greta that, that's what should happen?
Malia is a real pitbull!

YES!! Make sure to hold people accountable for their records!

Are they the real DILL ??

And how can an out of state company SELL a tax credit for money to an in state company that had nothing to do with the film in the first place ? Is that legal? Does the film company put that cash as revenue on their income tax ?

I never heard of selling / buying tax credits... It must be legal since its in the law but it sounds mighty fishy to me like other Alaskan DILLS I have heard about.

don't you guys have any self respect

Phil why do you encourage these nuts?