Whose Panties Are in a Wad? 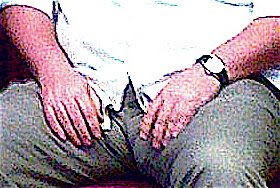 Liberal bloggers are getting their panties’ in a wad over our new site. That’s a good thing.

Liberals conventionally try to muzzle speech that doesn’t fall in with what they believe. If you are a crusader for truth, you really haven’t accomplished much if a group of leftists hasn’t tried to shut you down.

This liberal blogger congratulated Fagan for his Alaska Broadcasting Association award before anyone else in Alaska did so (except his boss) on his AM radio program.

Unlike eleven times when I've called in to his program, he didn't hang up on me in the middle of a sentence, as in "to muzzle speech," Dan. He wasn't charitable enough to thank me for the sincere congratulations, though, because he knew who was calling.

Two days before the election, when defending our incoming president in a call to his program, he had hung up on me, unable to call me "despicable" to my face, but quite happy to do so after he had muzzled me.

the glut of hand-wringing, partially-informed, political blogs here in the state.

Neither BJ nor Fagan have the courage yet, nor professional integrity, to name the blogs whose shortcomings concern them. I already asked that question to Dan's buddy, BJ, but I'm now asking both of them.

Both have commented occasionally at PA, so they are welcome to help confirm who the fuck they are accusing, in print and in electrons.

Sarah Palin at a turkey farm

Any member of the Bush family being sworn in as President.

A close up of Dan Fagan's vagina!

I mean geez Phil, I haven't even had breakfast yet!

WRONG. They hear it on Limbaugh or Hannity, and being devoted and gullible they repeat it endlessly.

"hand-wringing, partially-informed" easily applies to this post and the other one Phil. perhaps more so than anything else you've ever posted. and i'd add "of a junior high maturity level" after this. way to delegitimize any intelligent argument you may have thought you had. "I'm now asking both of them." ooooooh, bold declarative letters! this is the definition of what i was talking about, and the same goes for Linda's post on her blog. you've proved my point. (oh, and "BJ Kelley", ha! never heard that one before! you kill me!)

btw - your post here seems to essentially be calling me and Dan fags; homophobia's not very progressive Phil.

I have no clues as to your tastes, just clues that you're willing to do far more than most to assist Dan.

fagan's not a gay man, for certain. if he were, he would have an immaculate set for his TV show instead of a bunch of heavy mismatched drapes and that lumpy fabric covered table. looks like they are sitting around a pool table in someone's basement. very wayne's world.

Remember that Dan is an entertainer looking for ratings. If he can get your goat he has done his job.

The valley has a wonderful diversity of opinion. I am one conservative who enjoys your well written blog.

The interchange between you and Dan Fagan is good stuff.

In fact a talk show with two hosts, you and a conservative would be hot. Until it got so hot one of you got banned.

"I have no clues as to your tastes, just clues that you're willing to do far more than most to assist Dan."

now, back when you were one huge exploding pheromone factory of love for Diane Benson, if I'd printed a picture of her ass with pantylines on my website with a post about how you can barely control your urge to stick your tongue all up in her anus, i'd be pilloried for being sexist, if not worse (and it would definitely be worse). but it's cool for you to throw around homophobic suggestions of blowjobs - let's say i am blowing Fagan; you got a fuckin' problem with that? should anyone's sex lives be a subject of your concern? no, you're just calling people fags cuz it's a convenient pejorative for you to use. 'brendan wrote about fagan's website - what fags!' is essentially the entire point of your posts, and essentially what i detest about the blogosphere, it renders any valid points you have irrelevant. way to help the progressive cause Phil. but wait, that's not your goal, you want credit and attention for advancing the progressive cause... too bad you make a mockery of progressive activism.

Let us be clear: BJ Kelley is a cocksucker. Whether he literally or merely figuratively smokes poles is not clear: maybe Bingo can go ask an Eskimo.

We do know one thing: Brendan Joel "Let's say I -am- blowing Fagan" Kelley really needs to get that sand out of his vagina and go back to pretending to be a journalist.

Hey BJ: once you finish stocking those shelves, go and greet customers at the front entrance!

Where does Phil say anything at all about sexual preferences, or the tongue stuff? Aren't you over-reacting a bit here? Is this the way you act when people call into the paper to complain about a story? Are you okay?

Thanks for your comment. If you're the Robert I think you are, I take it as fascinating that you'd like such a program. I don't think I could deal with it, though - I'm not a TV person.

If I could only get back out of blogging, back into writing my music full time...

Maybe if the Anchorage Press covered half the shit the Alaska Bloggers have covered, you could say "the glut of hand-wringing, partially-informed, political blogs here in the state."

What is the fucking fascination with Fagan? I disagree with nearly everything he spouts about on his radio show but it's listenable decent radio (unlike Cary Carrigan). I'll give him that. But the ADN paying him to write(?), KIMO giving him a TV show, and now the Anchorage Press giving his new website a nod? WTF? Fagan is only DECENT radio-not great. There isn't a great host on the air anymore in Anchorage...

KUDOS again Phil...writing what the rest of us are thinking!

I was thinking you would do best hosting a radio show.

KMBQ has a new am station going live in a week. 5,000 watts, Eagle River to Talketna, 14?? on the dial. I heard they will have some valley talk shows.

BTW I think a talk show Hosted by Phil and a conservative Rush wannabee would have wide appeal eg Hannity & Holmes but with a Holmes who can think.

Y'all would get somebody's goat!!

oh Phill, ya seen to be jealous over Kelly's words about fagan's blog... Ummm big whoop!! In my house, we call you the Dan Fagan of Alaskan Progressives.

Mr Kelley:
I think that you owe Diane Benson an apology. Your locker room comments were inappropriate and uncalled for. If you have a problem with Phil, don't drag Ms Benson into the fray, especially in so rude a manner.

You dropped several points by behaving so unprofessionally.

Brendan:
I didn't think I'd see the day when such a lewd and insulting description of a person NOT INVOLVED in the conversation would be your style....you definitely owe Benson an apology, and you should be fired from whatever reporting and/or writing employment you currently hold.

You are a jerk.

On second thought - what you have done with your words is more like an assault on an innocent woman. Is there such a think as a literary rapist? If you, you are it.