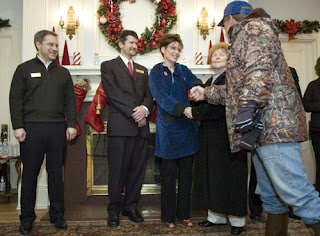 Thrilled to live in a city and state small enough where people can get to know their governor personally, Juneau residents and visitors lined up Tuesday for the annual governor's open house.

Juneau's Paul Spangler greeted the governor, then stepped around a corner and whipped out his cell phone.

"Guess who I just saw - Sarah Palin," he said breathlessly.

"I'm calling you from inside the Governor's Mansion - right now," Spangler continued.

I've heard and read that the renovations to the executive mansion involved important repairs and replacements to plumbing and electrical systems that may or may not have been long overdue. Palin's "truth squad" has used these renovations as a "reason" for her having been in Juneau so little since the legislative sessions ended.

I've also heard from Juneau sources that some of the renovations performed have not been at all necessary, and were rather costly. I can't help but be reminded of the times she redecorated or refurbished her Wasilla mayor's office suite while she signed on to her police department's deletion of payment for sexual assault forensic examinations, which then required state-level legislation to rectify.

This governor, who claimed in 2004 through 2006, that high-level state officials should publicly share the results of State Personnel Board findings, now refuses to do so herself. Time to move on?

This governor, who criticized her predecessor for high travel expenses, has managed to bilk Alaskans out of scores of thousands of dollars for such things as flying herself and daughter Bristol to New York City, for Palin to participate in a four-hour event, but then staying at a pricey hotel in New York City for an entire work week, at Alaska's expense. And so on. Time to move on?

This governor, who has been lying through her teeth for over a decade about being an expense cutter, seems to be spending as much time and effort changing the record on the reasons for her own personal expenses, as on figuring out ways to tidy up and pare our Alaska budget. Time to move on?

This governor, who is proposing a FY 2010 budget based on unrealistically optimistic oil pricing, whose AGIA deal with a company that will not be able to obtain either financing or gas, and whose obligations to locked-in budget expenses are going to be overwhelming, appears to be blithely walking into a shitstorm that will be at least as bad to Alaskans as was the mini-depression here from late 1985 through 1988. Time to move on?

The cold reality is that our upcoming legislature, Republicans and Democrats, need to assert far greater influence over the budget and spending processes in Alaska than they have over the past decade. My hopes for this aren't exactly brimming with optimism.

It is time to move on, though, from expecting any sort of creative, incisive thinking from the Palin administration.
Posted by Philip Munger at 7:20 AM

Do you think they will assert themselves? I don't hold a lot of hope for them. The SOS squad from the Valley was reelected to do what it does best, which is side with the Republicans and put on blinders.

Juneau PD broke up parties at the Gov. mansion and Juneau parents told their kids not to hang out with Palin kids

There must be a police report somewhere

You don't mean Dennis Egan, do you? He was making home brew in the basement when his parents were on a trade mission trip to Japan, and threw a big and noisy party that got busted by Juneau cops... and Tony Knowles' daughter, home from college at age 19 or 20, had a nice dinner for visiting college friends that included wine, and there was a little flap over that.

Dunno about the electrical renovations, though I'm sure that even if they had been upgraded during the Sheffield era restoration/remodel, some upgrades probably wouldn't hurt.

I do know that much of the plumbing really needed replacing; it was old steel & black iron pipe almost everywhere but the kitchen, and they had already had damage from pinhole leaks.

But even when the house was undergoing the extensive renovation back to the historic decor of the original house that was done in the Sheffield era (ripping out the Captain Cook decor the Hickels had installed), Sheffield lived there, not in his house in Los Anchorage.

Palin has just been using the plumbing as an excuse. I think that she's just uncomfortable with the formality of the Mansion --- she prefers her oversized suburban house.

I heard that the formal dining room, library, and sitting room/ballroom really put her off, as did the restaurant style kitchen (which was built so that it could be used to serve dinner for 40).

Wait wait, the governor was in Juneau?