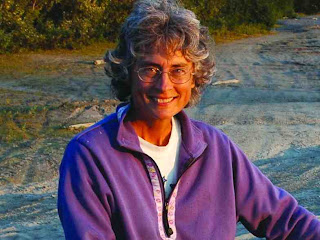 [At 1:00 p.m. Alaska time, I'll be hosting Dr. Riki Ott's two-hour on-line question & answer session at the national progressive blog, firedoglake. Riki is in Haines today, where she has been giving talks to the public and in local schools since late last week.

Here's the cover essay that I wrote for firedoglake:]


Dr. Riki Ott’s most recent book, Not One Drop: Betrayal and Courage in the Wake of the Exxon Valdez Oil Spill, seeks to braid together four threads into a single strand. The result is less a “fisherma’am’s” yarn than it is a sturdy rope from which one might create a noose for the likes of corporate monsters like ExxonMobil. The strands are:

1) The generation-long string of lies ExxonMobil has spun, as they have dealt with the aftermath of their negligence in the Exxon Valdez catastrophe.

2) The increasing evidence, from data gathered on Prince William Sound, of the enduring toxicity from the spill upon the ecology of the Sound and on the northern Gulf of Alaska; and increasing evidence of that toxicity having permanently and negatively affected the health of workers who labored on the 1989 and 1990 cleanup efforts.

3) The physical, financial and psychological impact of the spill and resulting litigation on the community of Cordova, Alaska, partially told through twenty years of conversations and actions between Ott and her longtime friend, Linden O’Toole, as Riki and Linden watched the former’s family be born, grow up, mature and bloom, in the midst of tremendous hardships.

4) A close history of the legal battles fought, against ExxonMobil, against Alaska’s (now famously) corrupt political institutions, against the adversarial paradigm of U.S. courts, in a political, cultural and legal environment that gives primacy to huge multi-national corporations over citizens.

That’s an audacious task. The book succeeds. It might not have worked, if Ott’s second book, Sound Truth and Corporate Myth$, hadn’t provided details about the mounting scientific evidence on the toxicity of petroleum products, which she was then able to summarize in Not One Drop.

Robert F. Kennedy, Jr. had this to say about Ott’s earlier book:

“This book doesn't just change our view of the Exxon Valdez spill; it forces us to dramatically reassess the risks from petroleum and the enormous costs that industry is imposing on our health and planet.”

As to Not One Drop, John Perkins, author of Confessions of an Economic Hit Man, has written, “As you read the pages, allow your heart to break.”

Mine didn’t. Like Dr. Ott, I have lived on Prince William Sound. Her portrayals of Cordova, and the waves of trauma the community has, and still does endure, are highly accurate, sympathetic and nuanced. Her descriptions of how people have dealt with waves of heart breaks, economic ruin, desperate measures, suicides, domestic violence and substance abuse are countered by her delineation of various community responses, and how they helped the community not only survive, but begin to prosper again, both materially and spiritually.

Riki Ott’s book follows a long path in American ecological writing, but her approach is somewhat unique, and strengthens the book’s impact.

Her late father, who passed away as Riki finished the proofs, was one of the last students of Aldo Leopold, author of A Sand Country Almanac. That 1949 posthumous compilation described land use ethics in easy terms that hadn’t been readily accessible to lay readers until its publication. One of Leopold’s main contributions in that book was his rich description of how we destroy the authenticity of lands, lakes, rivers, ecosystems and bioregions in our quests to possess them on one level or another. Ott takes this further and deeper, with her views on the limiting of the powers of large corporations in the future.

Her solution? She takes it up in the concluding section of the book, “A New Consciousness.”

A movement that would revoke “personhood” from corporate entities - The 28th Amendment to the U.S. Constitution.

At two events in Anchorage this past week, I witnessed how audiences are reacting to Ott’s challenge to rope in the growing powers of “corporocracy,” as she calls it. She told me that since her book tour began in early October, as the financial meltdown has become increasingly obvious, audiences have gotten excited, almost overwhelmed by this part of her book tour talk.

Dr. Riki Ott has been described as a “modern day Joan of Arc” (Laura Turner Seydel), “like David confronting Goliath” (Dr. Jane Goodall), “the Erin Brockovich of the Exxon Valdez disaster” (Fran Korten) and so on.

Twenty years ago, before the Exxon Valdez oil spill, ornithologist-fisherman Pete Isleib described her to me as “prophetic.”

That was ten months before Ott stated to a community meeting in Valdez, over a telephonic hookup from Cordova, crackling and breaking in and out in best Alaska communications tradition, that, when it came to the possibility of a Prince William Sound oil spill, “we're playing Russian roulette here. It's not a matter of 'if.' It's just a matter of when we get the big one."

Within two hours of her testimony, the Exxon Valdez was gutted across the top of Bligh Reef. The vessel’s skipper crackled over the radio about his broken up vessel, “We’re fetched up.”

The oil spill altered the lives of Alaskans, particularly the people of Prince William Sound, Cordova and the small Alaska Native communities there, forever.

Since then, ExxonMobil has illegally tapped Ott’s communication and had her arrested. They have sought to tarnish her message at every opportunity, even as they have endowed the careers of so-called scientists who advance the anti-science corporation’s agenda that climate change is a myth.

The title of the book, Not One Drop, comes from a statement made around Alaska in 1973 by Alaska’s soon-to-be former Senator, Ted Stevens, in which Stevens promised that if “rabid environmentalists are thrown aside, and we can build that pipeline from Prudhoe Bay, not one drop of oil will be spilled. I’ll guarantee it!”

Ted Stevens makes the index of Not One Drop, as he should. He betrayed our Alaska fishermen time and time again, in many ways. Our current Alaska Governor, Sarah Palin, does not make the index. We would appreciate it today if she is regarded as “way off topic.”

Good discussion. Thanks for the mention of corporacracy.

Rural Alaska is wrestling with many of these issues. Folks know there needs to be more of a cash economy. They have the resources. But they are rightfully worried about the changes that come with corporacracy, and all that means. While they worry, the material situation gets worse.

We are probably going to have some strong federal opportunities to build out economic infrastructure in the bush. I suspect Ricki Ott's words will remain relevant.

For me, these issues are at the core of 'progressive.' How do we be problem solvers in ways that are truly, not superficially, but truly beneficial? Aldo Leopold asked those same questions, then Ricki Ott, and now the community of progressives.