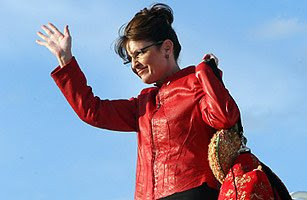 At the end of last week, her first full week back to work since summer, Alaska Gov. Sarah Palin proposed a total of about $1,250,000 in health care proposals for the upcoming fiscal year in Alaska:

The governor wants to extend the State Children's Health Insurance Program (SCHIP) to families earning up to twice the federal poverty level -- $44,000 for a family of three.

Now coverage is limited to those earning a maximum of 175 percent of the poverty level, or $38,500 for a family of three -- an income that doesn't leave room for buying non-essentials like health insurance.

Expanding the program will make about 1,300 more children and 225 more pregnant women eligible for coverage, the governor's office said.


In the 2008 legislative session, the Senate voted to raise the coverage to those earning twice the poverty level, but the House did not, and the governor sat out the debate. A year was lost.

The expansion Palin proposes will cost the state less than $1 million a year .

Dedicating $250,000 to earlier diagnosis of autism; establishing a state health commission to work on improving health care for Alaskans; and continued investment in anti-tobacco and anti-obesity programs. Those efforts would include a new state Web site to promote healthy lifestyles.

For this, and other health care infrastructure support measures proposed by the governor, the Anchorage Daily News, this morning, lauded Palin's efforts. But let's put these - so far - defined costs into perspective.

In less than nine weeks in 2008, Gov. Palin managed to have about $349,950 spent upon personal upkeep - clothes, accessories, makeup, body care, and so on. If Palin were to keep spending on these things at that rate for an entire year (or fiscal year), the bill would be about $2,000,000.

Celtic Diva puts some of Palin's costs into further perspective, and asks questions about the expenses necessary to revitalize our Alaska National Guard and Veterans infrastructure.

And AK Muckraker praises Sunday's ADN editorial about Palin's shifting lies and dissimulations about promises she has made and broken to all Alaskans on "transparency," regarding Troopergate's fallout.

Posted by Philip Munger at 5:34 AM