I lost the USB transfer cord for Judy's camera, but found it under a stack of papers in my UAA office yesterday. Here are some photos I took at last Saturday's Cook Inlet Keeper Muckrakers' Ball, held at Anchorage's Chilkoot Charlie's: 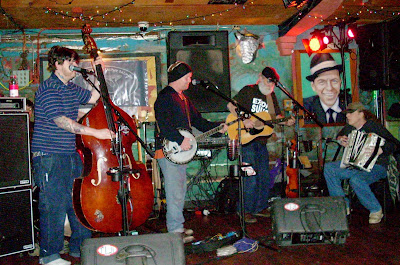 Dr. Riki Ott talking about the proposed 28th Amendment to the U.S. Constitution: 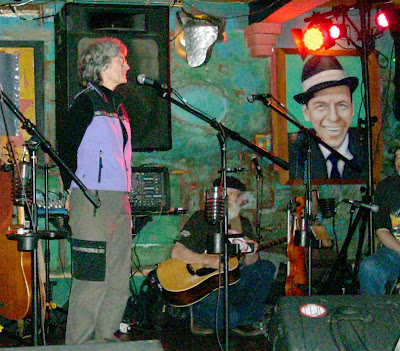 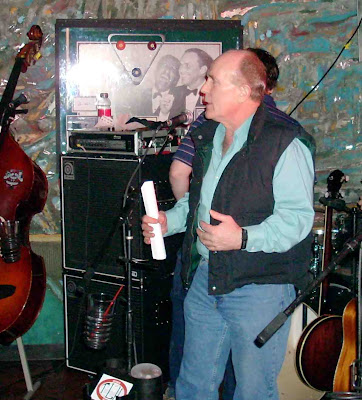 Last Saturday was the first time I had been in Chilkoot Charlie's since January, 1996. That previous time, I was performing at one of the bars, on tenor horn, with the Anchorage Krausenspieler Blaskapelle Band. They're the well-known German and Austrian music band, so familiar at Oktoberfest, and on the Nordic Ski Club's ski trains. They play polkas, waltzes, two-steps and other stuff like that.

Back then, during a band break, dressed in my lederhosen, I walked by two very punked-out dudes. One had flourescent green hair, the other had a lot of facial piercings.

As I walked past them, one turned to the other, saying, "Dude, they told me out front that there's an 'alternative band' in here, but these dudes are WAY too alternative for me!"

After playing the Friday night gig in 1996, I turned in my outfit, drove to the airport, and caught a plane to New York City. That Sunday, some of my piano music was played in a concert in the Juilliard Recital Hall.

I think I'm the only person to have ever had gigs at 'Koots and Juilliard on the same weekend.
Posted by Philip Munger at 6:35 PM

the last time i was in there was almost as long ago, a few months after they opened the bird house replibar. i wanted to see how good a likeness they produced. it's pretty good! i recall the bartender saying, they had lots of stops and starts during that project -- they'd start to build it, and it would look all wrong and they'd tear the work out and start over. just when they were sure it was going to be impossible, they found a 26 year old carpenter, he looked at the old photos of the place, went to work and created a perfect copy. genius.

I'll go see The Mule playing anywhere, even 'Koots! I think I was there three years ago, down in the side bar with the slope to it.... the reincarnation of the .... Birdhouse? Was that what it was called? Lots of bras and panties stapled to the walls.....

I spent a lot of time at the old 'Koots in Girdwood, and at the REAL Bird House. Came with living in Whittier and having a few close friends in Girdwood, like Gary Young, especially.

God dammnit Phil! This post is time stamped exactly 25 minutes before Dan Bern's concert at Vagabond Blues...Dan asked where you were...I told him you were saving the world with your words and music...Dan told me to tell you hi! So...hello from Dan. You missed a great show.
Kelly

I wasn't going to go alone - Judy is still heavily wrapped up in work. Sorry...