Snowzilla Now Has His Own Site 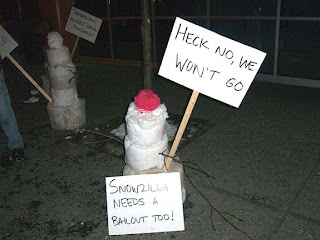 Hat tip to Ishmael Melville at Kodiak Konfidential, for posting the first picture outside the snowzilla site of the spontaneous appearances of the tiny Snowzilla clones. The complete set of pictures are available at the Snowzilla site.

Considering all the rallies and demonstrations we've seen in Southcentral Alaska in 2008, it's good to head on out of this year and into the next on some touches of light humor, eh?

An interesting sidelight on the Snowzilla coverage, is that the only picture they managed to get up at the Anchorage Daily News of the Snowzilla appearances at Anchorage City Hall, was of the debris, after the story was over:

[the ADN's Snowzilla photo was removed by PA at 1:48 p.m, once its purpose had been served. Thank you, Bob Hallinen]

Dougherty doesn't inspire news coverage very often, but he does know how to spin a headline. The ADN entry reads:

Ish, on the ball as usual, was able to post:

And the folks at snowzilla.org posted:

That's the way 2008 often was for the editors and publisher there.

I'll bet they call me or email me to take down the debris picture I temporarily borrowed from their site quicker than they can come up with their next Pat Dougherty-inspired breaking news story, though.

Update - Monday at 1:45 p.m: An anonymous Anchorage Daily News editor has responded to, as I termed it above, "temporarily borrow[ing] Bob Hallinen's Snowzilla photo, even more spectacularly and ineptly than I had hoped. Bob's excellent art/work having served its purpose here, I thank him, and offer him a CD of my orchestral music in exchange for the borrowing, should he want it.

Phil, if you want photos on your site, why don't you take your own?

I find this behavior surprising in someone who says he has taught college classes. Respect for intellectual property is typically a core value in an intellectual community like a university. I also find it surprising in a music composer, which Munger is, because I doubt he would like to find his music available on someone else's website without his permission.

The U.S. has led the world in so many business and scientific fields, in part, because of the strength of our copyright and patent laws, which were developed early in the country’s history and strengthened over time. The purpose of the laws is to encourage people to develop new ideas by ensuring that those who create work and invent things are able to benefit financially from their efforts.

For those of us in the publishing business, this has become more of an issue as the internet has made it possible for anyone with a computer and an internet connection to publish to the world. Technology has also made it easy for these new publishers to take the work of others and use it as if it belonged to them.

For a print and online publisher like the Daily News, it is difficult to prevent websites and blogs from taking our work and using it. Most of the time when we encounter a misappropriation, it is someone new to publishing who doesn’t understand that it’s against the law to publish someone else's work without their permission.

When this happens to us, I usually explain the law and ask the offender to remove our material, which in almost every case they do. I encourage them to link to our content, so their readers can view whatever story or photo they’re referencing.

Anonymous editor at the ADN, posting as "editorsblog" -

Got you to come out of your lair. Now the photo can come down. Thanks for letting me borrow it! See you next time.

ps - when are you going to develop an honest rubric at the ADN for consistently crediting our Alaska bloggers for keying you or your staff onto a local or national story? You do this all the time, but then only cite the html source we had posted, as part of a larger article.

I find many of your policies in this regard to be as dishonest and unethical as what I've managed to get you whooped up about.

ack... bob hallinen, i meant. for some reason i get those two mixed up. sorry about that, bob!

It is poignant. And the headline certainly fits the photo, but the real story was over by the time he ADN got there...

Philip Munger is a local blogger and critic of the Daily News. He’s also a thief and curiously proud of it. I noticed over the weekend that Munger has, for at least the second time, stolen the property of the Daily News for use on his blog, in this case a photo from our coverage of Snowzilla, the giant outlaw snowman. Munger backhandedly acknowledges that he took the photo from the Daily News, although he removed the photographer’s credit.

Munger appears to understand the basics of copyright law, he just doesn’t seem to believe it should apply to him.

the ADN photo goes down, now that it served its purpose. See update in the post.