Palin in Georgia - Report No. 2 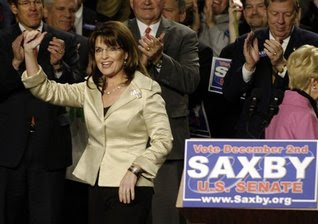 Reports from Alaska Governor Sarah Palin's first of four campaign stops today in Georgia, on behalf of Sen. Saxby Chambliss' re-election runoff bid, are coming in. And they are coming up mixed.

Some reports had the Augusta Georgia crowd as high as 4,000, some lower than 2,000. I just watched a video of her entire Savannah speech that sometimes pans out over the hall, and there are many empty seats. But,

“Sarah! Sarah! Sarah!,” they chanted. One woman stood behind Palin with a huge red sign that read: “Save My Gun.”

The enthusiastic crowd obviously loves her, cheering loudly as she enraptures them with her simple message. And that message seems to be less strident than it was during her appearances on behalf of the GOP presidential ticket. 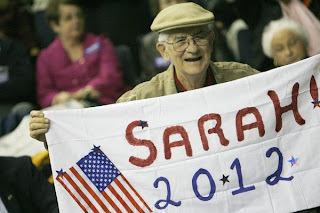 The most recent polls, from over the weekend, show Chambliss ahead of Jim Martin by about the same margin Don Young beat Ethan Berkowitz last month, up here in Alaska. Martin is ahead, way ahead, among people of color. Chambliss is polling in the mid-70% area, among white Georgia voters.

Palin spoke of her party now being out of power, the opposition, fighting on, an image that always goes over well in the old South.

Writer Neal Gabler wrote an op-ed for the Los Angeles Times yesterday that reflects upon where Palin's place might be in trying to gain back that lost power:

Reagan's sunny disposition and his willingness to compromise masked the McCarthyite elements of his appeal, but Reaganism as an electoral device was unique to Reagan and essentially died with the end of his presidency. McCarthyism, on the other hand, which could be deployed by anyone, thrived. McCarthyism was how Republicans won. George H.W. Bush used it to get himself elected, terrifying voters with Willie Horton. And his son, under the tutelage of strategist Karl Rove, not only got himself reelected by convincing voters that John Kerry was a coward and a liar and would hand the nation over to terrorists, which was pure McCarthyism, he governed by rousing McCarthyite resentments among his base.


Republicans continue to push the idea that this is a center-right country and that Americans have swooned for GOP anti-government posturing all these years, but the real electoral bait has been anger, recrimination and scapegoating. That's why John McCain kept describing Barack Obama as some sort of alien and why Palin, taking a page right out of the McCarthy playbook, kept pushing Obama's relationship with onetime radical William Ayers.


And that is also why the Republican Party, despite the recent failure of McCarthyism, is likely to keep moving rightward, appeasing its more extreme elements and stoking their grievances for some time to come. There may be assorted intellectuals and ideologues in the party, maybe even a few centrists, but there is no longer an intellectual or even ideological wing. The party belongs to McCarthy and his heirs -- Rush Limbaugh, Sean Hannity, Bill O'Reilly and Palin. It's in the genes.

Here's a YouTube that just got posted, of a portion of her appearance this afternoon, in Perry, GA:

Posted by Philip Munger at 1:16 PM

What the hell is Kris Perry doing there with her?

Why does that shiney jacket look familiar?

Lord save us. The Legislative Council must investigate the expenses for this nonsense -- why is she being accompanied by Ms. Perry on this trip and how much is it costing us? If Sarah Palin is still Governor at the end of 2009, Alaska will have squandered its 50 years as a state.

I'm not sure I have a problem with Perry accompanying Palin. How they deal with accounting for Perry's time is another matter, but, if they deal it it honestly, it shouldn't be a hassle.

I thought she was giving the campaign clothes to the poor people. Looks like she missed a jacket. Pay Pay, check your closet again. MM

Regarding payment for the trip: Bill McAllister said two times that Palin was in Georgia for "one-half day" despite the fact that she was in Georgia Sunday afternoon/evening for a fundraiser, and there all day today. She leaves for Philly tonight for a 2 hour meeting tomorrow.

From what I'm seeing of Palin's Georgia trip, is a lot tighter discipline by the people running her now than was exhibited during the McCain campaign.

Her Georgia rally statements were typically vacuous, but they were less provocative than what Chambliss is airing down there.

She was far less a "closer" for the Chambliss campaign than she was as an "opener" for herself. She even admitted that in the long video I posted.

They were there to see her and not Chambliss, anyway. I was actually surprised to see how subdued she was (I saw the live feed from Savannah). She got majorly used (and badly mishandled) by the GOP, but then, she signed up for it, so...