Palin Popularity Lowest Since She Was Elected 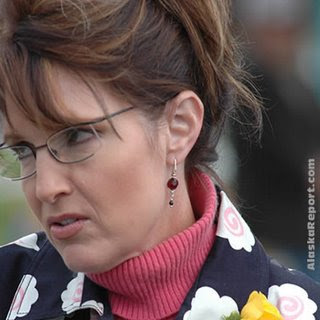 Research 2000 was recently commissioned to poll Alaskans on our possible political choices in the future, by the influential liberal blog, DailyKos. The poll, published early this afternoon, shows Gov. Sarah Palin doing well in every matchup polled, including in a primary run against Sen. Lisa Murkowski for her seat, which comes up in 2010.

In the DailyKos diary entry covering the polls, the site's blogfather, Markos Moulitsas, has this to say:

Crap, did I really jump back into polling Alaska? Crazy, since everyone was wrong about the 2008 results. People said they wouldn't vote for the two crooks -- Sen. Ted Stevens and Rep. Don Young -- and then they did! It was a bizarre "Wilder effect" at play. But Alaska is far too entertaining politically to swear off, so we jumped right back in.

You can go to the diary to read the details. It is by far the most in-depth poll of Alaskans since late October, and is fascinating. Here are just a few of the more interesting findings:

As for general election matchups:

Reelect 37
Consider someone else 27
Replace 36

And - Favorable/Unfavorable ratings for Gov. Palin:

Posted by Philip Munger at 5:20 PM

Yeah, those are still pretty strong numbers for the Barracuda. I can't believe she'd be that far ahead of Lisa in a Senate primary. WTF, over?

By the way, glad to see Knowles at the bottom of the heap. Stay retired in Hawaii, dude.

Lets do the Math,

In Six years she runs for Senate.

Nice Guy Mark Begich is a one term Senator

Looks like Robert has been doing the meth, rather than the math...

it's not just a river in eqypt.

Now is the time for Progressives to be focused on service, on getting things done in Alaska via local intiatives, and via Senator Begich and the Obama administration and federal economic stimulus money. The polls suggest Progressives have a ways to go. That's fine. We are not burdened by corruption and ideology. Progressives will work with anyone. Be patient, stay focused on service, and tell the story.

What do progressives want to do for Alaskans? That is the question.

Most of us see progressives wanting to lock up Alaska and lock people out of Alaska.

You will need to make people feel that progressives want to help the majority of Alaskans to stand a chance.

Time to change your image from a criticizer to a builder.

Whay anyone would pay good money for a poll to be conducted in Alaska is beyond me. Polling in our state is pointless: ask Ethan's real estate agent in Bethesda.

Really boys, you'd have to be pretty f*cking retarded not to know that despite everything, Sarah is still a strong statewide candidate. Also is it such a bg surprise that perennial loser Ethan Berkowitz would once again be Don Young's bitch?