My email to Rep. Mike Doogan 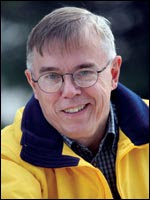 Although I wasn't one of the many concerned Alaskans who have written to you about possible executive ethics actions being addressed by the upcoming session of the Alaska Legislature, I've had an opportunity to read a response you sent out to a number of people who had sent similar mailings to you. One part of this communication from you interested me:

Third, I intend to move forward with legislation to prevent a re-occurrence of some of the problematic behavior that has arisen from the mess commonly called Troopergate. That legislation will define more closely what is a public document and seek to prevent public officials from shielding their communications by using private email accounts, and the state from stifling public access by charging an arm and a leg.

This is an excellent idea, Rep. Doogan!

I would like to recommend that you consider also looking at tightening travel regulations for the members of the chief executive's family. Gov. Palin's trip to New York City in 2008 with one of her daughters, to speak very briefly on one day, then spend the work week in a pricey hotel with her child, at taxpayers' expense, shouldn't merely be unauthorized, I feel it should be criminal activity entered into the "fraud" statutes of Title 11.

I am also disturbed to read of Todd Palin's access to confidential personnel files and other sensitive materials, as described by ex-commissioner Walt Monegan, in his statements to investigator Steven Branchflower.

Although I am not a constituent, as an officer of the Alaska Democratic Party, I eagerly await your reply to my earnest query.

Update - Monday at 4:45 p.m: I emailed back & forth with Rep. Doogan most of the early afternoon. I don't consider it to have been a very productive exchange. I tried to be respectful and open. He was quite minimal, offering nothing of substance.

I lost him when he seemed to be to the point where if I would reveal the identity of a certain blogger, he would continue to play.

I'd like to see sex between a corrections officer and an inmate be bumped up to a 1st degree felony instead of it just being a misdemeanor.

Thank you for taking the time to write it.

From what he said in the last letters he sent out, since you aren't a constituent you won't get any help, may not even get an answer. He can't be bothered with someone that isn't a registered voter in his district. Other than to insult, be snarky, and tell to get off his lawn and go away, while sending your email address to everyone in his list at the same time. In one day I had 36 emails from either him or someone on the list of names that had emailed him. All because he doesn't use BCC, just the TO feature. So be prepared.

Mike Doogan was a shitty columnist who couldn't carry Dave Barry's lunch box. He is a worse legislature. His constituents ought to vote his obnoxious ass out of there next go round. Great Job Phil! Kick his ass!

I'm Democratic Party secretary for the Mat-Su area, and for District 13. I trust that Rep. Doogan will read my reasonable letter, and like any other responsible legislator from my party, write back as soon as it is convenient. I realize, though, that he is also very busy creating his fiction.

Here's an example of how Mike Doogan thinks his state email account should be used. I truly hope this man gets a grip someday. He sounds pretty much of of control. I wouldn't expect much when you send him a letter or an email.

I hope you realize that you are being published on the Internets for your constituent to see how you treat those who disagree with you.

-----Original Message-----
From: Rep. Mike Doogan [mailto:Representative_Mike_Doogan@legis.state.ak.us]
Sent: Saturday, December 27, 2008 12:53 PM
To: Proud Progressive Liberal
Subject: RE: Someone needs to confiscate your keyboard for awhile. You're out of control.

If I told you who I was, you have made it clear by your past juvenile behavior that you would forward my email using your official state government email account to everyone and attempt to diminish what I had to say to you. You're an elected official and acting like a fool. The people of Alaska need to ask themselves if you are worthy of the public office you hold.

Sent: Saturday, December 27, 2008 2:28 AM
To: Proud Progressive Liberal
Subject: RE: Someone needs to confiscate your keyboard for awhile. You're out of control.

Someone needs to confiscate your keyboard for awhile. You're out of control.
You better remember that you work for the people of Alaska and they can fire your sorry ass just as quick as they hired you.

I fully trust that Rep. Doogan will reply to my email in as dignified a manner as he did to yours.

BTW - how quickly did he respond to your initial request?

Look at the times listed in the emails. He responded almost immediately like he was looking for a fight.

on another note, why isn't Doogan doing anything about Palin?

According the Huffington Post, Bristol Palin’s boy friend, Levi Johnston was texting a drug message after Palin was nominated as the Republican Vice Presidential Candidate. You can read the story here. http://www.huffingtonpost.com/2008/12/26/bristol-palin-drug-arrest_n_153586.html According to the affidavit, Levi Johnston sent a text message, “Hey, my phones are tapped and reporters and god knows who else is always following me and the family so no privacy. I will let u no when I can go for cof."

Sarah Palin is guilty of drug dealing by associating with Bristol Plain’s future mother in law, Sherry Johnston. As you recall, Palin accused President-Elect Obama of “Palin’ around with terrorists, associating Obama with Bill Ayes, who was a member of the Weatherman in the 60’s when Obama was about 6 years old. By the way, Ayes was never convicted of anything and today is an outstanding citizen and professor at a university.

Gosh Phil, seems like you had to make up your own email-gate... Pehaps due to the media coverage that PETA - McAllister email exchange got?

I know your a attention seeker, but this is kind of revealing as to how much attention you really need.

It is just best you stick to photos of Fagan's crotch and victimizing teen mothers. More your style. Okay?

Anonymous (8:45 a.m.): At least Mr. Munger has the courage to post his name. And he presents a civilized perspective and interesting observations, unlike your divisive and negative comments.

nwThatOne - didn't you know? Many come to Phil Munger's site to read the negative, gross, tacky and down right immature bent on all things Alaskan. Plus we all now he has a secret hardon for Sarah and will always be ticked off at Todd for doin her. Gee, didn't you know?

anon @ #12 - I can safely and honestly say that I have never, ever found Sarah Palin attractive in a physical sense.

My first impression of her, which I remember well, was when she was on the Wasilla planning commission. My impression then was that she was very well prepared for the meeting, unlike other commission members, and that her voice kind of grated.

As far as me just making this issue up with Doogan, Democratic Party Communication Director Kay Brown and others are aware that I have been hoping members of the legislature would bring up issues similar to the one I highlighted from Doogan's email. I hope to talk to Carl Gatto about that this week. Unlike Doogan, Gatto's home phone is listed and he returns phone messages left at his office, usually within hours.

gee Phil, I know you do NOT have a attraction for Palin. Ah I was joking.

However, here is a post I am not joking about:

I love it Democrats eating themselves alive! And you Phil are leading the charge. go figure...


Perhaps you should stick to photos of Fagan's crotch, victimizing teen mothers and being a thief of others copywrited work.

FYI: Most teen mothers victimize themselves.

lol, yeah, sure, right... "teen mother victimize themselves" good one... and a totally appropriate comment on Munger's blog of victimization. Right up there with photos of Fagan's crotch.

"Mr. Munger has the courage to post his name. And he presents a civilized perspective"

Phil enjoys doing just the opposite. His blog is anything but civilized...and it appears purposful. You obviously haven't read enough, or have very low standards for civilization.

FYI, I emailed back & forth with Rep. Doogan most of the early afternoon. I don't consider it to have been very productive.

I lost him when he seemed to be to the point where if I would reveal the identity of a certain blogger, he would continue to play.

Phil, from what we were getting from him I was afraid he wouldn't be very cooperative. He seems to be slipping into senility or something....lol being snarky there.. I don't know what is wrong with him for sure. He just seems to have decided he doesn't want to do or talk to anyone about anything, especially the Gov. or her family right now. I hope after the holidays things will change for you.