He certainly had a lot of competition, but the response to his disgusting behavior was magnificent.

Photo Gallery at the Mudlflats 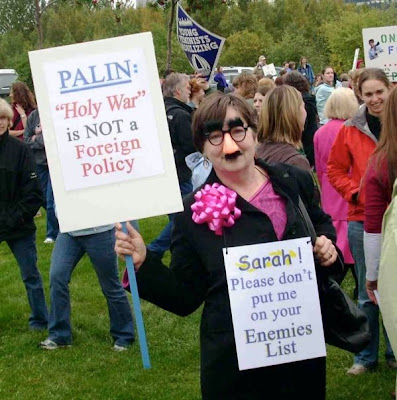 Posted by Philip Munger at 3:27 PM

I remember hearing about that when it happened, and thinking how terrible it was. But also how typical of conservative talk radio. He must take lessons from Rush and Sean Hannity. That was a great testimony to Sarah... lol now if we could just get them to speak again and again to others and make others realize how terrible she is.

The guy is a tool!

You haven't lived until you've been called a "baby killer" on Eddie's Show.

Of course, the next time he asked me, I told him I'd been called a "baby killer" enough on his show to last a lifetime.

"Maggots" is the best political argument Billy Burke can come up with to describe American and Alaskan citizens with whom he disagrees?

Here's some direct action you could take: Listen to the show to find out who his advertisers are. Compile a tape of his most offensive and divisive political talk. Then do a boycott of his advertisers and the owner of his station until he retracts. Watch how fast things change. If you don't believe me, ask Mike Stark, who is now at UVA Law. You can find info on-line about how he pressured ABC and Disney to reign in to offensive wingnuts on a national radio show.