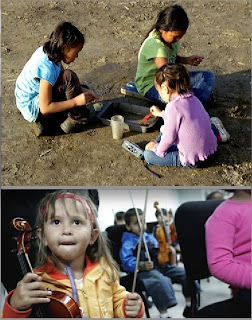 I was tempted to write this post about Alaska, Venezuela, comprehensive music education and ways out of poverty in Spanish, in honor of what has been accomplished in Venezuela, but the message needs to get across here, not elsewhere.

I've been partly spurred on by the extent that the trip by Venezuelan Ambassador to the United States, Bernardo Alvarez, to Alaska this past week, slipped under the radar. The Alaska Public Radio Network ran a story on his visit. The Anchorage Daily News ran a pre-visit teaser, but no real story. Alaskans for Peace and Justice notified members that Ambassador Alvarez was visiting. Friday he was at a reception at the new Conoco-Phillips Integrated Science Building at the University of Alaska Anchorage for two hours. I couldn't make it there.

Last winter, when we had a governor who only went to the most impoverished part of Alaska - the Wade Hampton Census District (per capita income = $8,717) - to bring Bibles and cookies, and Rep. Mike Kelly, an influential state legislator telling people in that all but treeless area to "go out there and cut your own wood or do something for yourself. ... I don't know how many of the 200-plus villages have a wood supply within a rock toss, but there's a lot of them because I've been to a lot of them," the Venezuelans, through CITGO, delivered needed fuel vouchers to the needy in the Alaska Bush.

Venezuela, whose per capita income is almost half again larger than that of Southwestern Alaska ($12,806 for Venezuela, $8,717 for Wade Hampton) is often cited as being poverty-stricken and prone to violence. It is. And so is rural Alaska. In Alaska, which is the richest state in the richest country in the world, the richest city just eliminated almost 90% of their municipal support for the arts:

That’s what new Mayor Dan Sullivan wants to do to arts funding in Anchorage. For those of you who don’t have your calculators handy, that’s an 89.9% cut from 2009 to 2010.

This move basically eliminates funding for the arts community in our city. Welcome to Anchorage with Dan Sullivan at the helm.

Venezuela, which like Alaska, derives much of the country's income from the petroleum industry, rather than drastically cutting the arts this past 15 months, has expanded such programs, particularly programs designed to use the arts to help lift kids' hearts, bodies and minds away from poverty, gang violence and substance abuse:


The most outstanding product yet of this system - that's what it is called El Sistema - has just become the musical director of the Los Angeles Philharmonic Orchestra. Gustav Dudamel is the most meteoric young orchestral leader in the world. Here he is directing the best of Venezuela's hundreds of youth orchestras in London two years ago:

And here is Maestro Dudamel directing the Simon Bolivar Youth Orchestra of Venezuela, in the second movement of Dmitri Shostakovich's Tenth Symphony, playing it far better than did the Anchorage [Adult] Symphony about three years ago:


Alaskans love the arts, but our politicians are among the most startlingly anti-public-funded-arts elected officials in the country, perhaps the world. Sure, we have many schools with decent music and art programs. But there has never been a state-level approach to integrating the fine and performing arts into the lives of our kids and their families.

Every time there is an economic downturn, arts education is one of the first items placed on the chopping block. Yet Alaskans probably pay about twice as much in overdue video rental fees as they do on arts education.

image composite - kids in Emmonak making a cake out of mud; kids in a small Venezuelan village, playing instruments paid for by their government

Phil-
You are so right.
We are so lacking in this state.
I think of the funerals and deaths I have witnessed since coming here just a few short years ago, all in bush villages.
To see the potential of children in the village schools that never get a chance.
To on the other hand see the few who call themselves leaders running to this meeting and that, all on dimes that should go to our villages.
SOMETHING needs to change!!
RR

Juneau just sent our most creative elementary school music teacher to a year of El Sistema training in Boston and Caracas.

Maybe he or she will come back enthused enough to make an impact on our educational musical art structure.

It is a basic premise of 'Waldorf' schools that all math and science emanate from a beginning of art and music in the younger years...by eliminating them in our schools and society we just manage to create a dumbed down drone culture that is easily manipulated and enslaved by stupidity.