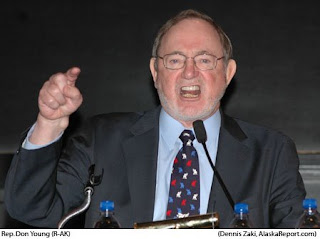 Alexander Burns at politico.com, has listed the Ethan Berkowitz-Don Young U.S. House race for Alaska's sole seat in the lower house of the national legislature as one of the the biggest upsets of 2008. Burns writes:

In the contest for Alaska’s lone House seat, most analysts had left incumbent Republican Don Young for dead. Though Young has served in the House since 1973, bringing in piles of federal money for Alaskan projects, a federal corruption investigation was supposed to spell ballot box doom for the cranky appropriator.

This is the second general campaign in a row where Ethan Berkowitz outspent his opponent and then lost. Neither Ethan, Diane Benson nor 2008 Democratic Party early primary candidate Jake Metcalfe have been very explicit about 2010. Ethan has come closest to announcing he is still in the race.

And there are other capable Democrats out there. After Benson, who I would support but feel might do far more good working in the Obama administration in the Department of Veterans Affairs, or in the Bureau of Indian Affairs, I'd like to see Alaska Rep. Sharon Cissna in the race. She's as smart as Ethan, and is as knowledgeable about health care as Berkowitz is on renewable energy.

Who do you prefer? Progressive Alaska is posting a new poll on this. Possible candidates are listed alphabetically.

When election night ended on November 4th, I was not satisfied. I was ecstatic that Obama had won, but I was upset that Begich was trailing Stevens. This did not feel right, and so I blogged about it, and so did Shannyn Moore. And with the media paying close attention Begich emerged the victor!
But I was not yet done. I still felt that Ethan should have won! So I talked to every political rabble rouser I could think of here in town, and I called experts on stealing elections all over the country. We had them ready to fly up here and delve into the mystery of Alaska's voter turnout, the strange inconsistencies in the returns, and the question of how the vote could have split to elect one ethically challenged politician while rebuffing the other.
I had friends ready to make placards, political bloggers warming up their typing hands, and citizens volunteering to provide money. We were, if I may, "fired up and ready to go".
And then Ethan just gave up.
He conceded.
I wrote to his campaign asking them to reconsider. No answer.
I would have fought for Ethan Berkowitz. I would still be fighting for Ethan Berkowitz if he had decided to contest the election results. There is simply no "quit" in me. But with no candidate, there is no fight.
And do you know what? We would have won. I just know it. I can't prove it. But I just know it.
So now I am over Ethan Berkowitz. He let me down.....

You can read the rest at Immoral Minority.

I will say this much. Somebody commented here back in early October, asking what Diane Benson and her supporters had done for Ethan since the August 26th primary.

My response was, "Everything we've been asked to do, and more."

Update 2 - Sunday 2:30 p.m: I got an email from a friend saying the poll doesn't show up on Firefox and Windows Vista. Anyone else have the same problem?

Posted by Philip Munger at 8:50 AM

When 'The Don' is convicted like his buds, he will go down. Until then, the voters will keep sending him back to DC to collect those gov't $ they so dearly love to hate/take. Sad, but the truth is money trumps ethics almost every time. Until a jury says, 'Go to Jail", people will forget the ethics and keep the cash.
We like to think more of our fellow citizens, but history sides with greed.
Geo

I don't believe Don won the race. If there is ever an election autopsy...I would only believe Don is our legitimate congressman after proof. I would not be surprised if those that were manipulating GEMS software in 2004 and 2006, manipulated it in 2008. Randy Ruedrich worked his magic in the Young race...

I didn't vote, because I don't live in Alaska, but if I did, from what I have seen and heard, I think it would have to be for Les Gara. But, I don't know much about the rest. I just know Les has been the one who seems to respond to the voters or at least to me in regard to Sarah and her problems. And he did challenge Meg very well. So that impressed me, he doesn't seem afraid to speak up and speak his mind.

Anon @ #3 - there is no proof whatsoever that you are WRONG.

Without access to raw data and comparisons to paper ballots at the precinct level, we will never know the truth on that race or any other statewide race.

Until progressives can get a candidate who can win they will have to keep saying the election was stolen.

Progressives biggest problem is the Alaskan electorate. To about 60% of the electorate progressives appear to be anti-Alaskan.

Even Don admitted that Dianne Benson would have had a much better chance of beating him.

As a conservative, I would hope that if Alaska elected a progressive it would be someone like Croft, French or Benson. Someone who could work with all Alaskans.

I do not know if Croft is "Liberal" enough for progressives but he has "Egan Like" respect from most Alaskans.

I didn't put Eric in there because he is currently committed to the Anchorage mayoral contest. I like Eric a lot, too. Like I told his dad, two years ago, "You weren't exactly the best legislator I worked with, but you did a helluva a job raising your kid."

Changing Alaska demographics may further complicate the Alaska political outlook. At least one natural gas pipeline will be built, as well as infrastructure, all with an influx of nonresident workers similar to the first oil pipeline. The immigrants are not likely to be New England Democrats.

Fertile ground for Democrats will likely be in labor unions, among veterans, and in visibly getting things done for districts.

Without reference to his current commitments, I like Eric Croft's chances for statewide office, particularly if Don Young is evicted beforehand. I do not see anyone else on the list beating Young in a head-to-head contest.

There was a constant drone about Ethan in the ADN reader feedback. He was "from San Francisco." He didn't share "our" values. Comments are censored for outright racism, but I couldn't help but wonder if this wasn't code for "he killed Christ, after all," and "he must be gay," despite the fact that he is married and only returned to S.F. (where he was born) to go to one of the country's best law schools.

After all "Obama is a Muslim." Reality doesn't intrude in the minds of true believers.

Don was fortunate that he had yet to be indicted by November 4th, despite his substantial connections to such ilk as Bill Allen and Jack Abramoff. With Ted, the fact of seven convictions made it difficult even for a minority of diehards to wrestle with the question of guilt. As it was with William Jefferson's constituents, they presumed innocence no matter how much marked money was found in the freezer.

Palin got 59% of the Alaska vote (same as Bush '00, less than Bush '04),Young 50% and Stevens 48%, despite all their obvious problems. I think a precinct-by-precinct analysis might sort out how much they benefitted from racism and fundamentalist tendencies.

Lastly, I wonder if the Begich GOTV campaign was directed at electing Berkowitz as well? That effort clearly was why Mark managed to be elected despite the conservative and reactionary turnout.

During the presidential campaign there was discussion of the earlier "Bradley effect" in reference to Tom Bradley's run for California governor in the 1980s. (as I understand it, California voters may not have wanted to admit racial bias on the telephone to pollsters-- but then some of them turned around and voted against Mr. Bradley, a black candidate, contrary to what they had indicated their preferences were to pollsters-- which may be why Bradley lost despite his lead in the polls).

Religious bias may have impacted Alaska's congressional election. Pollsters like Moore may have failed to factor in this element especially if some voters reversed their previously stated preferences when they actually voted.

Our national government in general has probably become more theocratic over the past couple decades, and I hope Obama, who I believe respects separation of church and state, can help reverse this trend. He'll be swimming upstream against a strong fundamentalist current.

Talking to Diane Benson about this since the election, she doesn't feel that Ethan might have been a victim of the biases you indicate, at least to the degree you posit. I think she has a very informed view of the fundamentalist/evangelical influence here, and should be interviewed on that.

During the campaign, before the August primary, a Ft. Worth reporter, working on a story I don't believe was ever published, claimed that Ethan told him he felt himself to be undergoing the stigma of anti-Semitism "every day of the campaign."

When the reporter related Ethan's comments to me, I replied, "Well, nobody's going to know what that means or how deeply he feels it more than Ethan himself. I don't know what to say, but I'd compare what you say Ethan feels he's going through to what Diane Benson has endured since she was a foster child in Ketchikan. She grew up in a climate very hostile to her race, her heritage and what she considered to be her living culture and spiritual essence.

"Maybe they've both endured cultural bias and racism, but I don't think Ethan has any more claim to that than Diane does."

[from my notes of the conversation]

Thanks for your thoughts. I think I made comment number 10 above.

Would it be possible for you to interview Ethan and Diane on this (their observations after running for congress as democrat non-christian, or democrat non white-guy, or both). How much of a biased barrier (if any) were Alaska's voters to their humanity and personal identity?

Happy New Year. Thanks for articulating what's right and wrong with Alaska's politics. Don't underestimate your contributions locally or nationally-- you've made a HUGE difference. You're intellectual, ethical, dedicated, and a great writer.

Don't go away-- we may need you even more in the future.