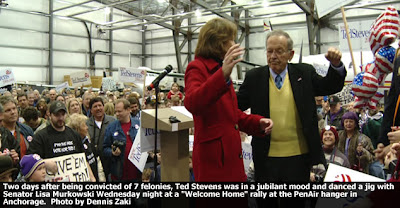 I say "Pardon Ted!" For the good things he did. He sure did a lot of shitty stuff, but he also did some great things over the years. Not just for Alaska, but for the USA and for the world.

Probably the most important thing he did was push for oversight of Soviet science programs, nuclear facilities, high tech scientists, nuclear naval vessels and nuclear materials, in the wake of the downfall of the Union of Soviet Socialist Republics. Most of those programs, created by a bipartisan set of teams and working groups between late 1989 and the early 1990s worked very well, until George W. Bush dismantled or neglected most of them soon after he was elected.

For those efforts alone, Ted Stevens deserves a pardon.

In exchange for the pardon, let's get his goddam name off of all those public facilities, and pass an Alaska law to never, ever name a public facility after a living person.

image by Dennis Zaki - Lisa and Ted whooping it up, after they thought he'd won the November election.
Posted by Philip Munger at 6:27 PM

Ted might of done "some good stuff" but to Pardon him, would lead a dangerous precedent, no punishment for political corruption, which You in Alaska have another person there currently thinking herself "untouchable" "unimpeachable" "above the law"...No Ted did wrong, he KNEW he was breaking the law, even said, maybe he would only have to spend "a little jail time"...
No pardon, and lets get the Feds on Gov. Grifter....!

That's BULLSHIT Phil and you ought to know better!

Ted is NOT above the law. His crimes in fisheries are still being investigated. His crimes connecting him to Ben are yet to be disclosed. I don't care what the man has done-that isn't the point of the law.

Furthermore, Ted voted for the USA PATRIOT ACT-TWICE, The 2006 Military Commissions ACT and FISA! His crimes against the only thing he swore to protect are probably among his worst offenses.

Considering those votes do you still think he deserves a pardon?

And don't tell me everyone else trashed the Constitution too. We are only responsible for the the 3 criminals representing Alaska...

To call this nation a nation of laws, and then call for ignoring that this is a nation on laws is nothing but an Orwellian nightmare.

....you ought to be ashamed, Munger, asking that Ted's crimes be pardoned.

Like you'd ask that the serial rapist be pardoned because at some time he's thrown a few pennies into the Christmas kettle.

....and you have the gall to call yourself progressive? That's despicable.

throw the book at him, let some charitable judge commute his sentence to home confinement.
and leave all the names as they are. it will serve to constantly remind us about the dangers of blind allegiance and our state culture of corruption.

If he had been tried and convicted on his more substantive crimes - like ruining our coastal fisheries, like selling out the telecommunications industry, like illegally enriching family members beyond the sleazy Veco connection - I wouldn't be on board for the pardon. But he wasn't. He was convicted of falsifying records, which he did.

I also think he should be put in charge of the work crews that remove his name from the Airport, the Auke Bay Fisheries center, and any other public place named after him.

to channel rumsfeld for a moment [egad!]... we went to trial with the justice system we had, not the one we wished we had.

For all Ted did to enable the weapons producers and the weapons proliferation, especially weapons to Isreal, those phosphorous victims you're highlighting probably owe their plight directly to actions Ted took.

And you're so inconsistent, you would pardon the man who enabled those kinds of acts all over the world.

LIke I said, shame on you, Munger, you don't get to pick and choose when to apply various levels of morality. There's either right, or there's wrong.

Ted has blood on his hands far beyond the one single case that was made to bring him down.

Just like Al Capone, he was busted for one crime, that doesn't erase the fact that he was guilty of far too many more crimes and guilty of far worse crimes.

Ted get's no pass, he stands as he is, and you'd compromise and accept that. You just chose to stand by his other crimes.

The blood on Ted's hands is now on yours.