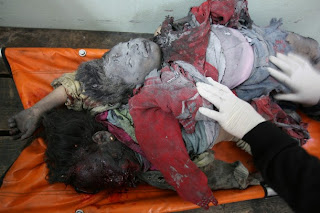 The Israeli bombardment of crowded urban areas of the Gaza Strip this past week got me involved in Israel-Palestine issues, a set of problems I've mostly left alone at Progressive Alaska, preferring to concentrate here on issues important to Alaskans.

Last Saturday, I posted a diary at DailyKos, called, IDF Gaza Offensive Thoughts - I Was Denounced as an Anti-Semite. My diary began with a quote from a speech Alaska Representative Bob Lynn made before a joint session of the Alaska Legislature, during their 2004 regular session. In his speech, Lynn denounced me for one of my works of art, The Skies are Weeping, about the death of a young American peace activist in the Gaza Strip:

There’s “good” music, and there’s “bad” music, and last Thursday at the University of Alaska, I learned about some very “bad” music and a very bad situation, during return to my district during the Holiday.

I was asked by a friend - who is a gifted trumpet player in the Anchorage Community Concert Band in which I play - and who is also a practicing member of the Jewish faith, to a lecture by an adjunct music professor at UAA about a cantata the professor composed entitled “The Skies are Weeping.” The cantata glorifies the death in the Gaza Strip in Israel of an American woman named “Rachel Coorie,” [sic] who spewed anti-Semitism, anti-Americanism, and burned the American flag as a member a radical Palestinian organization that has condoned homicide bombers. Worse, that adjunct professor attempted to dedicate the cantata to the president of the University!

I must tell you it was an “eye-opener.” I could hardly believe an American professor - an Alaskan professor – at an Alaska campus - could utter such anti-Americanism, and anti-Semitism on the campus of one of our universities. So-called academic freedom didn’t apply here, because the professor was lecturing outside his field of expertise in music, in matters of politics involving world affairs

The DailyKos diary elicited a lot of responses, some of them provocative in a positive sense. But like many on-line discussions on I-P issues, the commenting got pretty heavy. Predictably so.

On Tuesday, I posted a diary at firedoglake's Oxdown Gazette, based on some of the things I had learned from the DailyKos diary, and observations about web coverage of the ongoing Israeli offensive. The Oxdown Gazette diary is called The Anti-Semitism Tag Isn’t the Only Weapon Used Against Defenders of Palestinian Rights. This morning the firedoglake folks moved it from the Oxdown Diary niche and onto firedoglake's front page, where, like to DailyKos piece, it got a lot of comments.

I'll be posting a new essay at firedoglake on Saturday morning, in Howie Klein's spot. Howie, who hosted Mark Begich at Blue America twice during the U.S. Senate campaign, is vacationing and doing research in Africa right now, so he's turning the spot over to a series of progressives and liberals, who will describe their political odyssey.

It should be interesting.

Posted by Philip Munger at 7:21 PM

I read your post at DailyKos...and I didn't agree with the ones attacking you. It is a tough subject. Lots of emotion as there always is about war of any kind. All you can do is tell the story and people will decide what they want to. You do a great job of that.

" But 100% of the US servicemen
who survived above decks have stated they believe the attack '(on the Liberty) was intentional, not mistaken. That negates the collateral damage argument."....
..... Phil Munger

Hmmm, what did MSM have to say?

From what I have read...the MSM didn't have a lot to say because it was kept pretty quiet.

Just as the Aid ship that was rammed earlier this week. Haven't heard much about it either.

Phil, propaganda is heavy on both sides. Palestinian bombs don't discern between children and adults. Don't believe these pictures. I'll look it up later, but didn't the Pals know that a certain building was a target so they filled it with dead bodies a year or two ago?

Anon @ #5 - the term "Pal" is considered denigrative by most neutral critics. They would put it on a par with terms like "Yid." Let me know whether or not you find out anything authoritative about the photo.

BTW, in the past year, drunk drivers, pimps, robbers, drug overdoses and domestic violence in Israel have killed far more Israelis than have all the Palestinian rockets in this century.

If the Israeli police with all their modern equipment and undisturbed organization can't stop these hundreds of Israeli deaths, how can the Palestinian police, constantly being harassed, targeted for assassination and ill-equipped, stop the rockets?

I didn't mean anything negative by calling them Pals, any more than I refer to nick names and nicks or pictures as pics. I suppose that I'd have had my hair stand on end if someone had referred to Japanese and Japs or as I recently made the mistake to my extreme embarrassment and will never hear the end of by my laughing family, referred (when speaking to a good friend's husband) to seconds as secs (sex) as in, "If you like the roast beef, there is always secs for sandwiches in the kitchen during the football game."

I'm having no luck on the photograph.

I will email you a copy of an email I got from former Congresswoman Cynthia McKinney. She was on the aid ship that was rammed by the Israeli war machine...

Keep on keeping on...