The Afflictions of Judith Butler and Steve Aufrecht 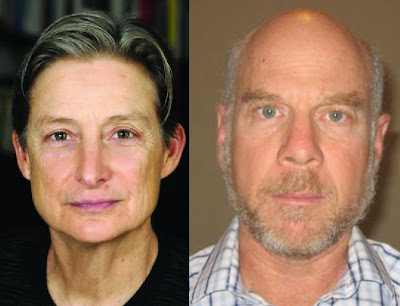 Earlier in the week, I read University of Alaska Anchorage Professor Emeritus Steve Aufrecht's pretty damn good essay partially on the understood rules of commenters' freedoms on blogs like Aufrecht's, posted at his blog, What Do I Know?

Both Butler and Aufrecht pleaded eloquently for civility, common sense and the necessity of real dialogue.

Their topics were worlds apart.

Butler was at a controversial event that discussed the Global BDS movement, presenting it from a favorable viewpoint.

Aufrecht was wrestling with a dilemma he is facing, trying to engage a somewhat obtuse yet intriguing commenter.

Butler, in the first publication of her remarks, linked to here, is being afflicted in the comments by a host of people who might have learned a lot from her wisdom.

Aufrecht isn't being attacked.  But having to continue to deal with an anonymous internet entity the way he has indulged it fascinates me.  The way Steve is handling this is creative and positive. I've learned a lot from him over the past six years.

When the commenter first showed up at Steve's blog, it was to attack me.  I immediately apologized to Steve for what I considered an affliction upon him.

Steve's response shows us his humanity.

Words from Judith Butler's concluding paragraph Thursday could have been uttered by Steve Aufrecht:


We can or, rather, must start with how we speak, and how we listen, with the right to education, and to dwell critically, fractiously, and freely in political discourse together.