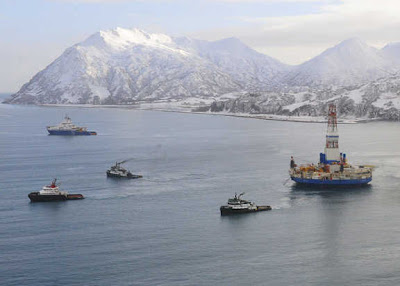 On Tuesday, Shell Oil's wounded conical drill rig, the Kulluk, was towed out of Kiliuda Bay on Kodiak Island, headed back to Dutch Harbor, and from there, to a Korean shipyard.


“We’ve made progress in Alaska, but this is a long-term programme that we are pursuing in a safe and measured way,” said  Marvin Odum, Director, Upstream Americas.  “Our decision to pause in 2013 will give us time to ensure the readiness of all our equipment and people following the drilling season in 2012.”

Alaska holds important energy resources. At the same time, securing access to those resources requires special expertise, technology and an in depth understanding of the environmental and societal sensitivities unique to the region. Shell is one of the leaders in an industry move into offshore Arctic exploration. The company continues to use its extensive experience in Arctic and sub-Arctic environments to prepare for safe activities in Alaska.

Alaska remains an area with high potential for Shell over the long term, and the company is committed to drill there again in the future. If exploration proves successful, resources there would take years to develop.

Shell's other rig which had been used in their trouble-plagued 2012 season, the Noble Discoverer, is berthed in Seward, Alaska, awaiting arrival of a giant floating, powered dry dock, which will bring it to an Asian ship yard.

Alaska Sen. Mark Begich, according to my talk with his D.C. staff last week, has moved his Senate Subcommittee on Oceans, Atmosphere, Fisheries and Coast Guard hearing or hearings on Shell's 2012-2013 conduct from March to May, but provided no further detail.

The Department of Interior will be issuing their report on Shell's permit to drill in the Arctic by March 10th.

The U.S. Coast Guard has turned their findings on the Noble Discoverer's severe shortcomings over to the U.S. Justice Department, for possible criminal prosecution.

And the blog, Alaska Chinook, is reporting the following:


According to reliable sources, a member of the Alaska delegation may soon be under indictment for back-door pressuring the EPA to allow SHELL to move forward with its 2012 drilling program – which culminated with environmental crimes. When it became known that contaminated engine fuel could not meet the EPA “Air Quality” permitting and such would have caused SHELL to vacate any attempts to continue its 2012 exploration program, a project that has seen a whole lot of discomfort and controversy so far, instead of not backing off and adhering to its permitting criteria, SHELL was given the “Green light” to continue on with its program.

Stormy weather ahead for Shell.
Posted by Philip Munger at 10:31 AM