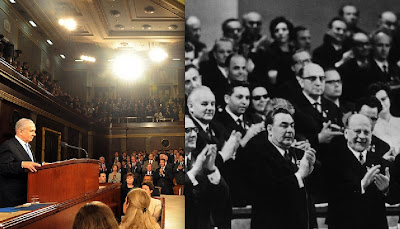 Last Thursday, philosopher Dr. Judith Butler delivered a profound address at Brooklyn University.  She was one of two speakers at what might have been a small gathering of students and Brooklyn activists, wanting to hear some intelligent ideas about the Global Boycott, Divestment and Sanctions movement.  The movement, begun by Palestinians in 2005, models itself somewhat after similar movements seeking to put pressure on the apartheid South African regime, from the late 1980s, through the fall of that regime in the mid-1990s.

The other speaker was Omar Barghouti, one of the founders of Global BDS.  Barghouti has a Masters degree in electrical engineering from Columbia, and a Masters in philosophy from Tel Aviv University. Dr. Butler, in her address, which was about 40 minutes long, noted in the opening remarks:


At the time [Butler was invited] I thought it would be very much like other events I have attended, a conversation with a few dozen student activists in the basement of a student center. So, as you can see, I am surprised and ill prepared for what has happened.

What happened was an explosion of invective against Butler, Barghouti, Brooklyn College, its President, and NYC Mayor Bloomberg, for supporting their being able to even talk on campus about BDS under the sponsorship of one of its departments, and without someone on the podium with them who could offer an opposing view.

Judith Butler drew some hearty laughs with this:


Yet another objection, sometimes uttered by the same people who made the first, is that BDS does qualify as a viewpoint, but as such, ought to be presented only in a context in which the opposing viewpoint can be heard as well. There was yet a qualification to this last position, namely, that no one can have a conversation on this issue in the US that does not include a certain Harvard professor [Alan Dershowitz], but that spectacular argument was so self-inflationary and self-indicting, that I could only respond with astonishment.


Far more Americans know of the Palestinian BDS (Boycott, Divestment and Sanctions) movement today than did a week ago. Many millions of people have been exposed for the first time to the idea that Israel should be boycotted, divested and sanctioned for its occupation of the territories. Many more Americans, one can safely assume, have formed a positive image of the BDS movement than those who have now turned against it.

Tafasta merube lo tafasta, the Talmud teaches us: grasp all, lose all. The heavy-handed, hyperbole heavy, all-guns-blazing campaign against what would have been, as Mayor Bloomberg put it, “a few kids meeting on campus” mushroomed and then boomeranged, giving the hitherto obscure BDS activists priceless public relations that money could never buy.

Rather than focusing attention on what BDS critics describe as the movement’s deceitful veneer over its opposition to the very existence of Israel, the disproportionate onslaught succeeded in casting the BDS speakers who came to the Brooklyn campus as freedom-loving victims being hounded and oppressed by the forces of darkness.

Judith Butler herself spent a fair portion of her 1997 book, Excitable Speech: A Politics of the Performative, describing aspects of this.  Essentially:


Butler argues that hate speech exists retrospectively, only after being declared such by state authorities. In this way, the state reserves for itself the power to define hate speech and, conversely, the limits of acceptable discourse.

I first came across Judith Butler's writing in 2004, when researching false uses of the terms "anti-semitic" and "anti-semitism."  I had been accused in articles, blog posts, and even in an address to a joint session of the Alaska Legislature as one.  Butler's writing eased my anguish at the time.

I've wanted to write an enduring essay about Butler's Brooklyn College address since reading it.  I've re-read it twice now, trying to distill it for popular blog consumption.  That may be a task beyond my ability.

The concept of censorship making an idea being censored more known and attractive predates Butler's analysis.  The history of people finding ways around such censorship goes back to ancient times too.  When societies begin to break down through hubris, hypocrisy, corruption, pollution and so on, some members of the nomenklatura realize better than others what is happening, what is at stake.

Butler's writings and talks (on Youtube, for instance) show examples of her sense of irony, and some humor.  Her overall style, though, is quite dry.  Nobody has ever accused her of pandering for attention, within or beyond academia.

Thinking about her irony and perhaps intentional avoidance of populist metaphor and framing today, I found myself listening more closely to the wildly ironic Dmitri Shosatakovich's 12th Symphony, a work I'm considering conducting in 2014.  He wrote it at the beginning of the end of the paradigm of a communist utopia in the USSR.  He had ceased to believe in the myth long before, but had been rehabilitated, and was commanded to write a triumphal work, dedicated to the memory of Vladimir  Lenin.

He was hesitant, but fulfilled the commission.  It was thought to be a workmanlike, dutiful symphony, but it has never been regarded as one of his masterpieces.

From my first hearing in the mid-1960s, I detected that he was mocking the idolization of Lenin.  He couldn't be more obvious than he was, or it would not be performed.  He mocked his own film music to the dozens of patriotic Soviet movies he scored.  He parroted the false drive forward of the increasingly failed system that entrapped him and other artists.

Watching the increasingly Sovietesque moves to somehow save Israeli apartheid from being truthfully perceived remind me aspects of the downfall of the USSR - not so much as in the Mother country, but in its satellites.

Here is Yevgeni Mravinsky, conducting the Leningrad Philharmonic in Shostakovich's iconic slap in the face of false monumentalism, from a 1984 broadcast:
Posted by Philip Munger at 11:39 PM