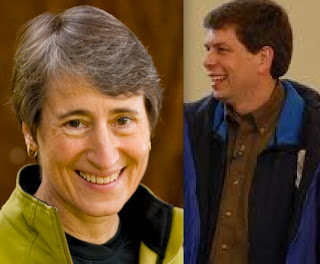 Wednesday's White House announcement of the Obama administration's nomination of Recreational Equipment Inc's Chief Executive Officer, Sally Jewel, to head the Department of the Interior in the president's second term, brought forth comments from all three members of Alaska's Congressional delegation.  The most comprehensive article yet on their comments was filed by Alaska Public Radio Network's Peter Granitz:


Senator Lisa Murkowski says Jewell’s private sector background would lend a healthy perspective to the department, but the transition to a massive government bureaucracy could be hard.

“When you’re coming from outside the government, dealing within the government confines can be very, very difficult,” Murkowski said. “[Energy] Secretary [Steven] Chu is a perfect case in point: Brilliant man, great credentials, but not a lot of background when it came to operating a department like Energy. And I think he’s been subjected to a lot of criticism for that.”

“We talked about going hiking together,” Murkowski said. “She strikes me as that kind of person, somebody that is very easy going, very unpretentious.”

But that doesn’t mean a yes vote is guaranteed. Murkowski worries Jewell could be too sympathetic to the environmental community.

Before the full Senate can vote on the nomination, Jewell needs to pass a vote in the Energy Committee. If that happens, Senator Mark Begich does not know how he’d vote.

“I am not just going to blankly support her because the president wants someone in that position,” Begich said.

Begich is withholding judgment until he gets to know where Jewell stands on key issues like Arctic drilling.

“The president has already said that is a policy they’re moving forward on, development of the Arctic,” said Begich. “But if the Interior Secretary isn’t supportive or slows down the process, that would be very problematic.”

Senator Begich also appreciates that Jewell has been in the private sector. Before REI, she worked in commercial banking, and out of college, in the oil fields of Oklahoma and Colorado for Mobil. She’s been active in elections, giving money to many candidates.

She’s mostly donated to Democrats, including a $250 contribution to Senator Begich in his 2008 Senate run. She also gave $500 to Senator Murkowski in 2009.

Absent from her donor list is Congressman Don Young.

He says he’s disappointed in the pick because he does not think she has an understanding of public lands issues. “I do believe her interests lie in recreational purposes and not multiple use of the lands,” Young said.

I emphasized Sen. Begich's comment on "slowing down the process" of Arctic development because it strikes me as a statement that raises a question about his impartiality as chair and chief hearing officer in the upcoming U.S. Senate Subcommittee on Oceans, Atmosphere, Fisheries and Coast Guard hearing or hearings on the January 31st grounding of Shell Oil's drilling rig Kulluk, and the events leading up to that grounding.

I've requested to Begich's staff that his subcommittee provide information before the hearing opens, on the depth it might go into, particularly in regard to the swearing in of witnesses and subpoena of documents:


1. When will the hearing or hearings take place?

3. Will witnesses be sworn in?

4. Do you plan on subpoenaing any documents, such as the Aiviq log book, correspondence and phone records between Shell and the Aiviq crew prior to departure from Dutch Harbor, or other important records?

5. Will the entire subcommittee participate?

Still waiting on answers.  I suspect most of those five questions can't be honestly answered yet, but by the third week of February, they should be in a position to provide information o the public.

His subcommittee owes it to Alaskans and a lot of others to pursue the depth of Shell's probable malfeasance in the Kulluk grounding, no matter where that leads.  Begich did write, in his letter to the Coast Guard Commandant, announcing the intent of his hearing:

The author of this article has contributed to Sen. Begich's 2014 reelection campaign
Posted by Philip Munger at 8:55 PM