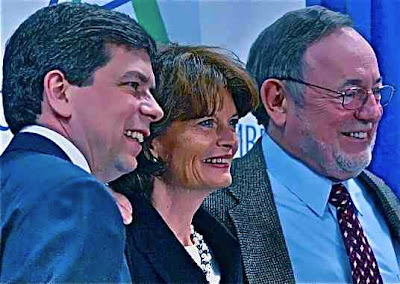 According to Alaska Chinook, which sometimes is ahead of the curve, sometimes not:


According to reliable sources, a member of the Alaska delegation may soon be under indictment for back-door pressuring the EPA to allow SHELL to move forward with its 2012 drilling program – which culminated with environmental crimes. When it became known that contaminated engine fuel could not meet the EPA “Air Quality” permitting and such would have caused SHELL to vacate any attempts to continue its 2012 exploration program, a project that has seen a whole lot of discomfort and controversy so far, instead of not backing off and adhering to its permitting criteria, SHELL was given the “Green light” to continue on with its program.

I'll be making some phone calls Monday to see if anyone else believes this might be about to happen.

Sen. Begich, according to my talk with his D.C. staff last week, has moved his Senate Subcommittee on Oceans, Atmosphere, Fisheries and Coast Guard hearing or hearings on Shell's 2012-2013 conduct from March May, but provided no further detail.

The Department of Interior will be issuing their report on Shell's permit to drill in the Arctic by March 10th.

Sen. Murkowski is threatening to put a hold on the nomination of Sally Jewell to succeed Ken Salazar as Interior Secretary, until Obama promises to build a road between King Cove and Cold Bay.

Rep. Young has been notably quiet on Shell since January.
Posted by Philip Munger at 7:18 PM