On Bears, the Chelyabinsk Event, the Tunguska Event, John Bolton, Chuck Hagel - and Other Matters

At the Booman Tribune, BooMan speculates about actual and hypothetical reactions to Thursday's explosion in the sky over the Siberian region near Chelyabinsk.  He is concerned that had the explosion happened at the height of Cold War tensions, and in another region of the world, the explosion might have been misread as a hostile nuclear explosion, and provoked a thermonuclear response from the USA or USSR.  BooMan ties this in with an episode on Carl Sagan's Cosmos, and the interception back in early February, near Guam of a Russian Tu-95 Bear long range patrol aircraft:


Russia sent a couple of nuclear-capable bombers to circle around Guam, forcing us to scramble intercepters. This makes me a little nervous on a day that a meteorite blew up in the Russian sky with more power than the bombs we dropped on Japan. Carl Sagan once did an episode of Cosmos dedicated to discussing The Tunguska Event. The Tunguska Event was a still not perfectly understood catastrophe that happened in Siberia in 1908. It was probably a comet, a fragment of a comet, or an asteroid that exploded in the air and caused non-radioactive damage equivalent to our first test with a thermonuclear hydrogen bomb. Dr. Sagan pointed out that a similar explosion in the nuclear age might have been interpreted as an attack which required full scale retaliation, thereby ending all intelligent life on Earth.

It is beginning to appear, according to NASA, that the explosion was even more powerful than what BooMan relates:


The 55 foot wide rock, said by Nasa to have a mass of 10,000 tonnes, lit up the sky above the Urals region on Friday morning, causing shockwaves that injured 1,200 people and damaged thousands of homes in an event unprecedented in modern times.

Nasa estimated that the energy released as the meteor's disintigrated in the atmosphere was 500 kilotons, around 30 times the size of the nuclear bomb dropped on Hiroshima in 1945.

It entered the atmosphere at 44,000 miles per hour, taking 32.5 seconds to break up at an altitude of around 15 miles above the earth's surface. 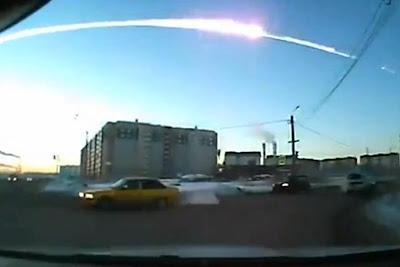 That is a lot of energy.  However, it is still only about 1 percent of the power of the largest hydrogen bomb explosion on record, the 50 megaton Tsar Bomba.  The May, 1980 eruption of Mt. St. Helens in Washington state, was measured at 24 megatons. 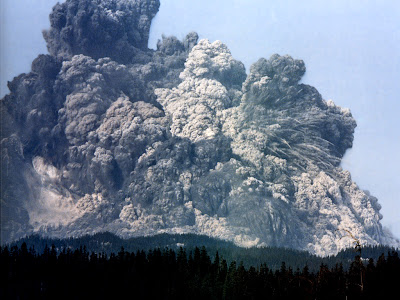 BooMan, comparing the Cold War, Chelyabinsk, Tunguska and the Guam overfly by a Bear aircraft, as prescient as his article is, missed a couple of points.

The first is that conservative media coverage of the Guam near-overflight  in the Washington Free Beacon makes it out to be something out of the ordinary (emphasis added):


Two Russian nuclear-armed bombers circled the western Pacific island of Guam this week in the latest sign of Moscow’s growing strategic assertiveness toward the United States.

The Russian Tu-95 Bear-H strategic bombers were equipped with nuclear-tipped cruise missiles and were followed by U.S. jets as they circumnavigated Guam on Feb. 12 local time—hours before President Barack Obama’s state of the union address.


The bomber incident was considered highly unusual. Russian strategic bombers are not known to have conducted such operations in the past into the south Pacific from bomber bases in the Russian Far East, which is thousands of miles away and over water.


According to one military official, the Russian Bear bombers remained in international airspace, the encounter between the U.S. and Russian aircraft “stayed professional” and there was no incident. The official said it’s impossible to determine whether the Russian bombers carried any nuclear weapons.

The NBC article goes on:


U.S. military officials say “it’s highly unusual but not unprecedented” that Russian bombers would fly training missions in the vicinity of Guam. According to one official, “It wasn’t provocative but it certainly got our attention.” U.S. long-range B-52 bombers, also capable of carrying nuclear weapons, are based at Guam.

Not unprecedented actually minimizes what happened.

There is an extraordinarily high amount of military activity going on in the Pacific recently.  The USA is pressuring Australia to increase basing of our military personnel significantly.  Japan and China are feuding over islands, atolls, rocks  and reefs.  North Korea's intent to explode another nuclear device has been known or predicted for a while.  They actually informed most local governments and the USA of their intent to test the weapon.

Tu-95's and their Russian naval version, the Tu-142, have been around the Pacific for over 55 years.  They've been around Alaska for all that time.  Here's a picture of one being intercepted near US territory in the 1950s, by a Canadian F-101, an aircraft removed from frontline service in the 1960s: 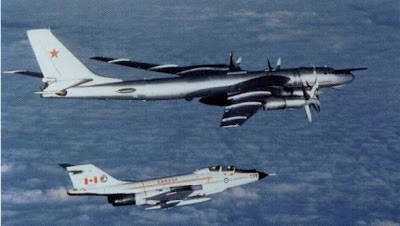 Here's a picture of one intercepted near Alaska recently: 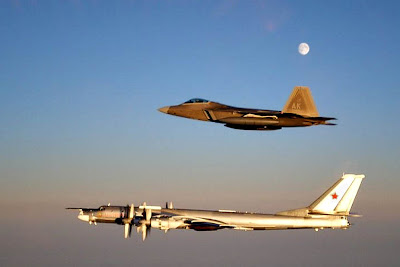 “Every day brings new evidence that Obama’s ideological obsession with dismantling our nuclear deterrent is dangerous,” Bolton said. “Our national security is in danger of slipping off the national agenda even as the threats grow.”

The second thing BooMan and others miss is that the Beacon article goes on to point out that somewhat "unprecedented" joint military activities are being conducted on Guam, led by the USA.

Russia has a huge amount of coast bordering on the Pacific rim.  They are currently developing large offshore oil and gas reserves in the Sakhalin and Sea of Okhotsk areas.  50-year old Russian reconnaissance aircraft keeping tabs on potentially challenging developments are normal, not "unusual."  I've witnessed aspects of it myself.  Long ago.

Back in late August, 1982, I was on the crew of the Crowley tug, Sea Giant, exiting the Arctic, after having brought the icebreaking barge Arctic Challenger from Seattle to Prudhoe Bay, and then picking up another barge in Kotzebue.  We were headed through the Bering Strait, en route to Captain's Bay, Unalaska.

As we approached the narrow portion of the straits, two IL-38 aircraft were observed from deck and bridge, circling us.  One stayed fairly high, over 5,000 feet above.  The other descended to under 500 feet.  It began making runs at our tug and barge from several aspects, particularly checking where we had just been.
On the bridge, the captain and first mate were speaking softly to each other, then they chuckled. I asked the first mate what was up.  He told me, "We're probably masking a 'boomer.'"

He explained that ballistic missile-equipped nuclear submarines often took advantage of the turbulence in the wakes of barges going through the straits to either enter or exit Arctic waters.  The Bering Straits are so shallow it would be hard to hide a sub's movement through it, even underwater, unless somehow masked.

In spite of the Washington Free Beacon and John Bolton's takes on this, these games have been going on for generations, and will no doubt continue for a long time.

There have been close calls.  There will be more.

Let's hope people like John Bolton are not in positions to make decisions then.  Far better for Chuck Hagels to make split-second decisions.
Posted by Philip Munger at 12:07 PM

Watch the testimony before the Joint Armed Services Committee on Thursday.

We need Sarah for these times when Putin rears his ugly head !

Can you imagine those blasts in the sky happening before excpected Mayas end of the world last year? I bet most of Russian population would be in panic.