The video PA and others posted yesterday, The Battle Hymn of Sarah Palin, contains the line "Sarah Palin has the wisdom to walk through an open door." In the video below on The Young Turks, Cenk Uygur and a colleague go through the entire song. Then they take a look at the lyrics:


The "open door" line actually has important context. This is from a week after the 2008 election, in one of Palin's first post-election interviews: 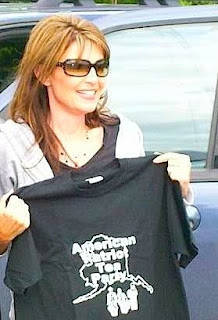 So, these people, keyed up on their song, dedicated to "The Tea Party and all their patriots," have - in this country western homily, evangelical church-attending, pre-2010 election environment - not only declared their fealty to the Palin-inspired meme that God will, as Palin beseeched in the November 2008 interview, "open a door" for Sarah, they've managed to sneak the metaphor past one of the sharper progressive commentators without notice.

Uygur's misreading of Palin's coded text, conveyed back through a couple of her acolytes, isn't entirely surprising. But Cenk's staff might have googled "Sarah Palin God, if there is an open door for me somewhere" before producing their segment on the seemingly inane lyrics.

People, like Max Blumenthal, Outside atheist and anti-theocracy bloggers, and some of the Alaska bloggers, have made important observations about those November 2008 lines, and have followed their embedment into her riffs and into the reactions of evangelicals, fundamentalists and charismatic Christians and Christianists to Palin's ascendancy. It was longtime anti-Christianist and milita movement expert, David Neiwert, who brought this video to light the other day at Crooks & Liars.

On one level, the Battle Hymn of Sarah Palin is hilarious. On others, it is clearly ominous to some of us. More people need to take her Christianist sub-texts seriously. She will be doing more of this in the coming weeks, and will be trying to tie it into more statements designed to heighten media attention to her upcoming visit to Israel.
Posted by Philip Munger at 6:01 AM

Hunting skunks is hunting biracial Americans,
It is a very racist very insulting word in the south and smacks of lynchings and racial murders.

Yankees don't know everything, maybe TYT needs goggle things that seem to not make sense.
Few real people hunt real skunks unless they are desperately hungry or getting into the hen house and stealing eggs.

Skunk hunting might be perfect for Sarah Palin. Family fun for all.

Skunk hunting is worth the stink
"We literally hunt skunks for fun. It started a few years back when the skunks were disturbing the pheasant population on our property by stealing the eggs out of the nests. We invented techniques to efficiently wipe out the skunk population in the area where we hunt."
"Skunk hunting may sound easy, but it can be very challenging. It creates such an adrenaline rush and happens so fast that you just have to react. The shooter can be so flustered sometimes that they can’t even hit the skunk. “It happens so quickly some times shooting can be very difficult.”

Oh look - "The driver always carries a pistol to back up the shooter if they can’t shoot well."
Perfect.

Metaphorically speaking, the door is on the floor, and the grifter never seems to miss a chance to twist words into a rope of her own demise.

May the door be an exit, stage right.

Each time Sarah speaks she indicts herself as a violent individual. She's never apologized or had the sensitivity to even pretend to comprehend how crosshairs could be construed by someone unhinged so we must conclude that she's nor only ignorant herself but totally irresponsible as well.

Sarah's become a symbol of vitriol in this country because each time she opens her mouth she's spewing threats and hatred toward someone out "there".

Her world is now shrinking and her popularity is now gone which means her money pot will be drying up because, as we all knew, she'd indict herself into becoming a national pariah.

Her obvious "grude" against people for dissing her in 2008 has become the hallmark of who she is.

She'd do herself (and others) some good if she were to seek counseling for her victim archetype which so totally runs her life.

At this point, Sarah has become a pathetic whiner. It's sad to see someone with such a loose grip on reality....the reality of the fact that she'll never again achieve public office.

Everybody always talks about Loughner's mental health. It is too bad they won't talk about the mental health of Palin who puts crosshairs on maps, targets districts and talks about reload all the time and is so vicious verbally. Normal people don't act like that.

LOL. First I checked the date of that Youtube. Thank goodness it is from November 2008.

Well, no, there is no Open door for SP.

In fact, if she runs, I will make an additional 15,000 phonecalls for her lead opponent, who is likely to be the Dem nominee Pres.Obama.

Do you think her and her followers understanding of the open door is limited to the electoral process?

In other words- not being elected is the same as the door slamming shut? Winning the election is the only way to step through the door? Or is there another way for the door to open?

Dominionists appreciate that the majority of the US electorate thinks like you apparently do.

The important question is do dominionists think like you do?

@1:16pm
You asking me? I am not sure I understand what you are saying in the last two sentences there.

Yes, I think she is an opportunist who waits for any door (opportunity) to open (present itself) to her. You know.. Reap it without sowing. Yes, sowing itself can be hard work, as in when you are fishing, or getting oil out of the deep... but not as hard as planting a garden and seeing it grow.

What struck me is the level of contempt I saw on her two youngest kids' faces at various times.

Also striking was how little affection she shows towards the younger daughters. And, before anyone starts, I expect affection from all parents towards their children. That is something I found missing from SP.