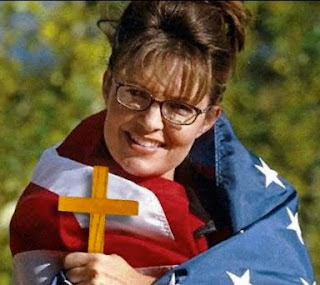 Gary Wills is certainly one of America's most able commentators on Catholicism, and Christianity in general. His list of books about Christianity is quite long. His writings on Judaism are much more lean, and tend to be in context of the development of early Christianity in the backdrop of being a faith that came out of Jewish communities in its early generations.

At the New York Review of Books' blog, Wills has tackled Sarah Palin's use of the term "blood libel" at the beginning of this week:

Robert Draper, who did the extensive interview-cum-article about Sarah Palin in The New York Times Magazine, still has good sources in her camp. On that basis, he told the Daily Rundown show on MSNBC that Palin timed her morning statement on the Tucson tragedy to play against the president’s anticipated speech later that day. The setting and solemnity of her presentation were manipulated to show who could be more “presidential,” she or Obama. That is a measure of her aspirations and arrogance.

This makes it all the more astonishing that careful work with her speech writers should produce her attack on pundits who “manufacture a blood libel that serves only to incite the very hatred and violence they purport to condemn.” What on earth does that mean? The classic blood libel tale has four elements.

This makes it all the more astonishing that careful work with her speech writers should produce her attack on pundits who “manufacture a blood libel that serves only to incite the very hatred and violence they purport to condemn.” What on earth does that mean? The classic blood libel tale has four elements.

1. Jews kill an innocent Christian child.
2. Then they use his blood to cook Passover matzahs.
3. The Jews are then captured and executed.
4. The murdered child becomes a martyr-saint—Saint Simon, Saint William, Saint Hugh.

How does what happened in Tucson fit that pattern?

1. An innocent Christian child was murdered, but by a non-Jew.
2. No use was made of her blood (the point of a blood libel).
3. The murderer was caught but not executed.
4. The girl was offered as a saintly model by the president.

There is not enough there to justify invoking the dread tale. How about if we look at other elements.

1. There was an attempt on innocent life, that of Gabrielle Giffords, but she is a Jew, not a Christian, and she was attacked by a non-Jew.
2. Once again the key element, the use of blood, is missing.
3. Her assailant is caught but not killed.
4. The president presents her recovery as a kind of miracle.

1. The innocent Christian attacked is Sarah Palin, and her assailants are “pundits.”
2. Still no blood.
3. The pundits are not even named, much less apprehended.
4. Saint Sarah canonizes herself.

Note that, cast about how one may, it is impossible to find a single Jewish attacker in the Tucson story. A blood libel without evil Jews and without blood is not a blood libel.

Though Palin is a Christian, she does not claim that she was attacked for her religion. Her offense was that she was simply “speaking up and speaking out in peaceful dissent.” The pundits who attacked her were “those who embrace evil and call it good.” That puts her in the middle of a cosmic struggle, with the forces of evil arrayed against her. Perhaps she liked the apocalyptic note in the sound of “blood libel.” Only something catastrophically evil could measure the extent of her martyrdom. If people point out that she obviously does not know what a blood libel is, she will just count that another part of her martyrdom by those who “embrace” evil as well as history.

The commenting community at the NYRB blog is highly educated. Here a a few of the comments attached to Wills' entry:

Questioning whether Palin understood the meaning of blood libel is akin to questioning why she was unable to name a single US Newspaper or magazine she got her news from, and why she couldn't cite a single Supreme Court decision she disagreed with, and why she didn't even know which countries make up North America.

The biggest question really should be at this time, why is someone most Americans never heard of prior to September 2008 & who lost in a demolishing landslide that year, still covered breathlessly by the national media. She's an out-of-work, celebrity wanna-be who is shockingly ignorant. It's time for the press to stop covering her.

One commenter disagrees with that assessment:

Sarah Palin and her handlers are smart enough to have captured a great deal of attention, as well as the adulation of millions (yes, millions) of voters. She is counting on her opponents' continuing underestimation of her. Today, she can use conspiracy paranoia to inspire her followers, so they feel like virtuous underdogs fighting an evil empire. Tomorrow, as an election approaches, she can shift to a milder impersonation of serious statesmanship, and augment her base with gullible and inattentive undecideds. Time to take her very seriously.

Commenter David O'Connell makes an observation I've made - in one set of terms or another - here at PA many times:

I think Mr. Wills and many others miss the point.

If readers of the NYR are to be of service, they should be thinking hard about why Sarah Palin is attractive, to whom, and why. She does not play to the left, she plays to others, alien to us, frankly, unknown to us, and that frightens. It is as if they are the great unwashed, and beneath contempt, because they flock to an icon we think stupid.

We judge. Do we have the right to condescend and ignore those with whom we disagree? If we focus on just how dumb Palin's vivid word choices may be, or how inflammatory we believe they are, and stop there, we give up thinking about why it appeals to her constituency.

As I wrote earlier in the week, I'm confident the people who prepped Palin's pre-presidential speech Monday knew what the term meant, even if she didn't, and that its use was not her choice. That being said, it was an inept phrase, at best, and, even with several prominent Jewish Americans coming to her defense, it will have negative ramifications when she visits Israel early this spring.

Posted by Philip Munger at 6:06 AM

Good post but a couple of paragraphs are repeated in it: "This makes" and "Sarah Palin and her handlers..."

I have to disagree with you on your closing Phil, Sarah may not have chose the word or understood it's meaning, but I think it just appealed to her machismo sensibilities - to use such a provocative sounding phrase.

Her "gutteral" instincts have paid off handsomely more than once, this time, it goes both ways. That dangerous imbecile is charmed.

Is the picture you have posted of Sarah Palin or of the actor/actress playing her on Lady Bunny's video? This is so campy!

Wow, Phil, I had not thought of the potential negative consequences when she visits Israel..

I am more inclined to think that she didnt know the meaning of the expression, and went for a highly charged sounding word. She wanted to emphasize libel... except she painted a bloody image... but the combination gave an entirely new dimension of meanings to her expression.
I agree with Anon @ 8:32am above. She has gained handsomely from her negativism and her commercial instincts. Even in the wake of this tragedy in Tucson, she has added another 20k followers on her FB account.. 3k in just this last week. Granted many are there for curiosity... yet, she has that audience -- and they dont just drop usually -- and she milks it to market her shows.
What struck me as very revealing... TLC that was reportedly in dialog with her about Season 2 dropped the convo on JANUARY 9th or 10th. Wow. Sure telling. That made me recall of the Moose-hunting trip in which she sported a cross-hair on her prey, pulled the trigger on two guns a total of five times and use her "Dont Retreat; RELOAD!" phrase before she killed the prey. How ironic! I wonder if TLC will re-air the moosehunting trip episode.

Wrapped in the flag,carrying a cross. She is my worst nightmare.

Plenty of others have used the phrase, even Eugene Robinson, a black man, in a black context. It's blown out of proportion only now that Palin used the term. But, many mainstream Jews do not have a problem with her using it, i.e. Dershowitz, Koch and ADL.

FYI, lots of Israelis love Palin. This will have no impact.