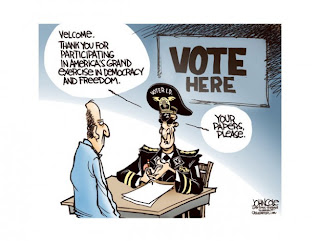 The unprecedented movement by the far right to push through restrictive voter identification laws is widely seen, with good reason, as an effort to quash votes that tend to go to the more liberal candidate.

Some voter ID requirements are more reasonable than others. Alaska's, for instance is similar to those in a number of other states (Arizona, Arkansas, Colorado, Connecticut, Delaware, Kentucky, Missouri, Montana, North Dakota, Ohio, Oklahoma, Rhode Island, Texas, Utah, Virginia, Washington, for instance), in not requiring a photo ID, but requiring proof of identity, if challenged.

Here's what our division of elections states in this regard at their web site:


When entering your polling place, the election worker will ask you for a piece of identification.

You may also present one of the following forms of identification if it includes your name and current address: current utility bill or pay check; government check or bank statement; or other government issued document.

If you do not have identification or your name does not appear on the precinct register, you must vote a questioned ballot.

I usually have my voter card and drivers license handy, but often know many of the volunteers at the precinct.  At the primary, where I voted at Colony Middle School, everyone there knew me, and I just signed in.  Afterward, we caught up on how our kids are doing in their young adulthood.

The April Anchorage election was a sign that right wing administration-hired hacks can do as much damage by just being dumb fucks as by intentionally screwing with people.  I've voted at a lot of precincts run by people who knew my political values are distinctly different from theirs, but have never had a hassle.

Here's a good video on why the wave of voter ID laws - mostly in Red or Swing states - are nefarious: This November is going to be a very important election.

Locally, the October local elections will be important too.

My view is that any time somebody is required to go to an expense to obtain ID specifically needed to vote, and only to vote, it is an illegal poll tax. 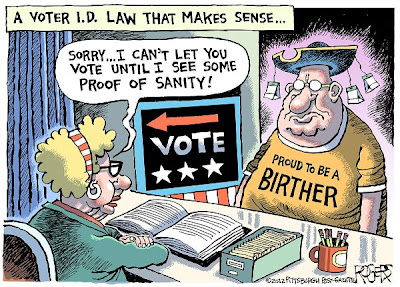 Personally I believe the new voter id laws will be a huge benefit to the election process. It will help to greatly decrease the prevalent voter fraud that is going on in this country.