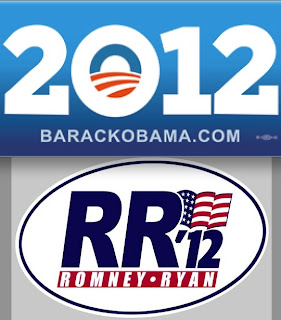 I took my good camera to Anchorage on Tuesday.  I drove in in the morning darkness, and came home long after it got dark again, but drove around town three times between job locations.  I counted Obama 2012 bumper stickers versus Romney 2012 bumper stickers.

I counted 11 Obama 2012 stickers and zero Romney 2012 ones.  I also noted eight anti-Obama stickers, all on pickup trucks, or on mini-vans with Christian fish symbols on the rear end.

There were more leftover McCain-Palin 2008 bumper stickers on vehicles than new stickers for all  candidates combined.

I never brought out the camera.

Listening to local AM rightwing talk radio, most of the blowhards are dismissive of Obama, and sound sincere when they talk that talk.  But when it comes to touting Romney, they just can't pull off sounding convincing.

Will this apparent lack of enthusiasm for Romney - even though he won both the 2008 and 2012 Alaska GOP Caucuses - translate into marginal advantages for Democratic candidates in our legislative races?

Gotta look out for those fish, especially the empty ones, when I hired a handyman/LANDSCAPER (WHO WANTED MONEY FOR SUPPLIES....!) who had one of those on his truck he was dud, he told me when I asked where he was going to start work was, there were people in my church who needed the money..... so I ended up doing the good deed for the con man.

I'd say something, but I'm completely confused.