Five September Storms - So Far. Is This Climate Change?

I.  The waves of winds and rains that have pummeled Southcentral Alaska since the beginning of September come on top of a fairly moist and chilly summer, and a winter that broke snow records in many places.

The flooding in Seward, the Kenai Peninsula and Mat-Su Borough late this week, the worst in decades in many places, would have been much worse had Friday been as moist as Wednesday and Thursday.  As it is, scores of millions of dollars of damage have been done to private property and public infrastructure:


Floodwaters have stopped all train traffic between Anchorage and Fairbanks, washed out the Denali Highway and caused serious problems on the Parks Highway.

The Alaska Railroad was washed out north of Talkeetna on Friday, halting all northbound train traffic until Monday.

A 500-foot section of track just south of Gold Creek was washed out and several bridges are at risk between Willow and Talkeetna.


As morning dawned on Talkeetna, it was clear the flood water had receded, no longer threatening the historic downtown and, while leaving standing water in much of the east side of town, roads there were more easily passable.

Where the Susitna River briefly seeped through a line of sandbags late Friday, the water had retreated to some boulders about 100 feet back from the barrier by early Saturday. Water from the Talkeetna River still flowed from East Talkeetna through a culvert under the Talkeetna Spur Road toward downtown but at a much slower pace.

Volunteers had worked into the early morning hours Saturday to line sandbags on D Street, diverting water away from the rest of downtown and an old airstrip.

On the north slopes of the Alaska Range, the Nenana River has flooded buildings in Denali National Park, and some of the coal mines at Healy:


Minor flooding already was occurring at the Usibelli Coal Mine in Healy, he said. Employees at the mine reported the boat launch was flooded and that water was over the bank and rising up on the shoulder of the road to the mine. The riverbank was eroding and several trees had fallen into the river, according to a statement issued by the weather service. 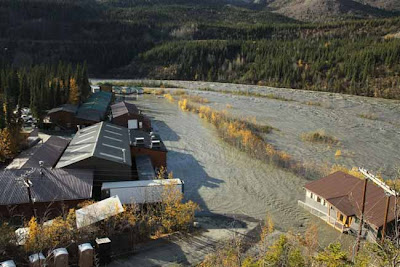 The Matanuska River is once again on the rampage, near Sutton , and downstream from the western Old Glenn Highway Bridge, past The Butte: II. Back in the first week of September, a somewhat unprecedented late Summer wind storm tore through parts of Anchorage with more ferocity than I can remember.  The combination of leaf-laden trees, wet soil and snappy gusts over 110 miles per hour, ripped thousands of trees from the ground, from Girdwood to Eklutna.

That was followed by another wind storm over last weekend, that was just as wild in a few locations on Anchorage's south hillside.

Is this a sign that the climate of this part of Alaska has changed permanently, bringing a more hostile weather environment to our area.  Certainly other parts of Alaska have already endured privations and disasters from what has been firmly established to be "climate change."

The North Pacific warms or cools in cycles, largely determined by temperature changes in the Pacific near the equator.  That cycle heavily influences weather in large parts of Alaska, particularly the sections bordering on the North Pacific itself.

But increasingly, the rapid diminution of sea ice in the Arctic Ocean will also influence weather patterns, and most likely, climate in vast parts of Alaska, Siberia, Scandinavia  and northern Canada.  And with it, there is more access to the Northwest Passage, and longer seasons for offshore developments, such as those that Shell Oil is attempting to initiate in Alaska's Beaufort and Chukchi Seas, and other firms, such as British Petroleum and Russian companies are pursuing off the northern Russian coasts.

It is more than ironic that one can Google "sea ice arctic development" and gain access to news articles promoting hyper development of more carbon for burning, in an area so recently freed up because of the hyper use of carbon worldwide for burning.  Some of the headlines are even zanier than this one:

One thing that is being predicted for the near future in the Arctic that is becoming more ice free at a shocking rate, is the advent of the Arcticane:


Whoever said watching the Arctic during the melting season is boring, needs to put his glasses on. After a record low reflectivity of the Greenland ice sheet (with accompanying floodings on the west coast of Greenland), the calving of another enormous iceberg from Petermann Glacier, and the general rapid decline of Arctic sea ice despite adverse weather patterns, we can now add to the 2012 melting season bonanza the appearance of a cyclone the likes of which are rarely seen in winter, let alone in summer. The storm came in from Siberia, intensified and then positioned itself over the central Arctic, reaching sea level pressures of below 965 mb in the storm’s centre, engendering 20 knot winds and 50 mph wind gusts. 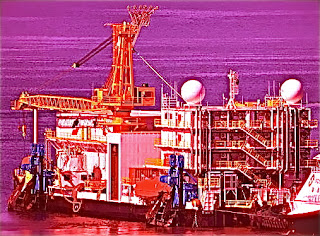 Companies planning mineral exploitation off the Arctic coasts are probably ill prepared to handle heavy weather in the summer-fall drilling season.  This is fairly obvious when one takes a look at Shell Oil's so-called "containment vessel," the Arctic Challenger, limping back into Bellingham Bay six days ago, after utterly failing its first and only test of the piece of equipment it is supposed to be able to deploy in hostile conditions.

First of all, the test failure debacle:

The refurbishment was completed last week and the vessel underwent sea trials in Washington’s Puget Sound, and a series of tests were successfully completed on the newly designed Arctic containment system, Op de Weegh said.

"However, during a final test, the containment dome aboard the Arctic Challenger barge was damaged," she said.

Sources familiar with the testing said the mishap occurred when one of several clump weights was placed into about 160 feet of water to mark the area of a theoretical oil spill, to see if the containment dome aboard the barge could be lowered over it.

"When they came back to find it, it [the weight] was lost, submerged into the silt," said one source, who spoke on condition of anonymity because he was not authorized to discuss the operation.

Engineers launched a mini-submarine known as a Remotely Operated Vehicle, which is part of Shell's plan for putting any oil spill containment equipment into place, to help get the oil containment dome carried aboard the Challenger set over the "leak."

"They got some of the weights set to hold the dome, then one of the eight winches on the dome became inoperative," the source said. "They attempted to discover what was wrong by using the ROV, and got it tangled in the anchor lines of the dome and it sank into the silt."

Divers were then dispatched to the sea floor to try to recover the dome without damaging the high-tech umbilical that controls it, he said.

It was not clear how much damage the dome ultimately suffered, but it apparently was enough to prompt Shell to abandon its well-drilling plans for the current season.


Secondly, the fitness of the Arctic Challenger to perform in adverse weather.

My only question is "Would you want to be one of the 70 or so people Shell wants to put on this bad luck hulk that was slapped together ineptly, during a major storm?"


I thought not.  It would end up looking much like this house, washing down the Matanuska River yesterday: 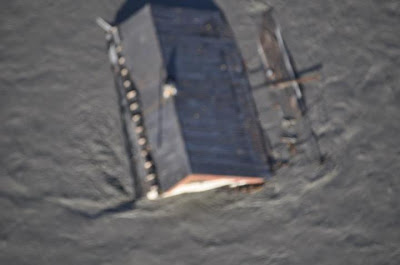 This vessel should never be deployed in the Arctic as the first line of defense against an oil spill.  Its chances of performing its job as Shell has so over confidently described it are somewhere between zero and minus 100 %.
Posted by Philip Munger at 2:18 PM

Great but frightening pictures. Hope no lives were taken. Hope Shell will go back to the drawing boards and think seriously about what they are doing to our world.

The climate is sure changing all over the world. Our forests are on fire and our crops have dried up. What ever you want to call it, we are all being affected all over the globe. Dread what winter will bring to the Rockie Mountains. Record breaking heat this summer like we have never seen before, breaking all kinds of records. Hope the cold weather isn't record breaking too.

I took the photos of the Arctic Challenger returning after the damaging test and can report that it was the tugs Lindsay Foss and the Arctic Titan which guided the vessel back to the Port of Bellingham. I have several hundred pics documenting the whole construction process from the initial prep of the warehouse to the whole assembly process. I have also been able to get some very nice telephoto shots showing the damaged containment dome. I look forward to this being the nail in the coffin of RoyalDutchShell in the Arctic.

Wow! It is a great picture. I'll put you name on it.

I went up to B'Ham from Seattle on August 7th to take a close look, but the contractors would not let me on board. I was on a crew towing the Challenger from Elliot Bay to Barrow in 1982. The barge has always had a fairly sketchy reputation.