Ultimate Cluelessness: Romney Smiling As He Exits Stage, After Killing His Political Aspirations 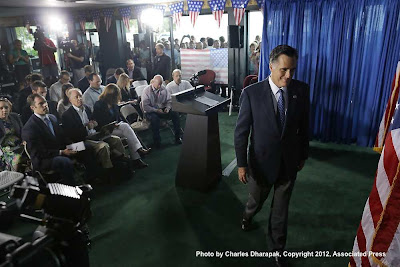 This photo was taken by AP photographer Charles Dharapak, as Romney left the podium, upon conclusion of his widely criticized remarks on the Embassy murders in Libya.

It strikes me as creepy.

I predict this guy will be down eight to ten points when the first post-stupid remarks polls come out.  There's probably no way for him to dig himself back out of the hole he has dug with the Europe-Israel tour, the pathetic GOP convention, and now - this.
Posted by Philip Munger at 12:56 PM

This idiot and his troll army vomit their poisonous vapors, condemning the Embassy for "Apologizing for America". THIS is the statement of the Embassy. Who but the most extreme reptilian-brained Right-Winger (and Mitt Romney), could disagree with this:

"...The Embassy of the United States in Cairo condemns the continuing efforts by misguided individuals to hurt the religious feelings of Muslims -- as we condemn efforts to offend believers of all religions. Today, the 11th anniversary of the September 11, 2001 terrorist attacks on the United States, Americans are honoring our patriots and those who serve our nation as the fitting response to the enemies of democracy. Respect for religious beliefs is a cornerstone of American democracy. We firmly reject the actions by those who abuse the universal right of free speech to hurt the religious beliefs of others."

Mitt has nice teeth but cannot tell by all the ankles in the way. The electorate know not a bit of this as they will never have it explained to them. AKjah.

Elstun. We are screwed any which way you look at it. We all try and try ....but so it goes. AKjah.

Agree with you, Phil. TBFY that Mutt Romney will carry your state 80% of voters. must be tough living among the black helicopter folks.