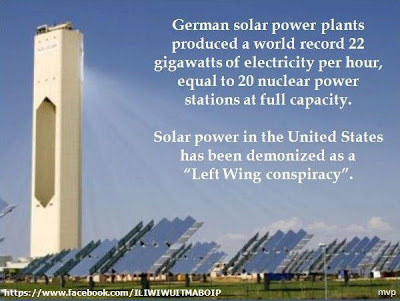 I realize Alaska is not the ideal place for solar power, unless it is part of a mix of renewable energy sources on a year-long basis.  But Germany is not a tropical country.  Its northern border is around 55 degrees northern latitude.  Alaska's southern border is at about the same latitude.

Driving back and forth to work, from home in Wasilla to work in Anchorage, I subject myself to right-wing talk radio on the way in in the morning.  I've never heard solar power mentioned in a positive frame by ANY of these hosts.  Rather it is the other way around - solar power bad, coal good, etc....

Here's a link to some food for thought:  Coal Cares - Solar Power is Evil:


A newly launched web site claims solar power presents many dangers and problems that coal’s million-year buffering is designed to avoid. After all, coal power is solar power it says.

The logic behind that statement lies in the fact that coal is formed from decaying organic matter - and the sun provided the energy that organic matter needed to grow.

Such a statement is sure to raise the eyebrows of many familiar with solar technology and perhaps cause some very strong visceral reactions from environmental groups, but everyone can relax - the site in question is purely satire.      Touted as being a goodwill campaign on behalf of a major international coal company, Coal Cares offers fictitious "Puff-Puff" inhalers for free to any family living within 200 miles of a coal fired power generation plant.

The site also has a section dedicated to revealing the dangers of renewable energy that help "prove" coal production and consumption is one of the safest endeavours on earth.

In relation to solar power, it says the direct use of the violent fusion reactions occurring within our nearest star is the equivalent to mainlining the sun and we run the risk of overdosing. Concentrating Solar Towers pose a particular threat the page states, with the ability to "instantly fry an entire extended family or even village to death."

Applying an exaggeration of the "butterfly effect", whereby small changes can have dramatic results, the page claims the knock-on effects from the turbulence a large wind farm creates could unleash the equivalent of 63 million tornados.

The Coal Cares web site is very professionally presented and all in good fun, but with a more serious underlying message concerning the greenwashing of fossil fuels and the spread of misinformation about renewable energy technologies by parties with a vested interest in maintaining the world's fossil fuel addiction.

While intended to be humorous, the company the site claims to represent is likely not laughing. Coal Cares could possibly keep some lawyers busy for a while.

Posted by Philip Munger at 6:30 AM

I get pissed off enough just watching the "regular" news shows, I can't imagine starting my day off with Right Wing BS. Gets your heart rate up a bit, I imagine.

I think I would rather eat worms than subject myself to right-wing talk. I did it for a while in the 1990s when a friend and I decided we had to understand where this type of "radio entertainment/hate talk” was coming from. It simply made me sad and depressed so many could listen and believe this irrational and critical-thinking challenged speech. I doubled down on efforts to make sure my kids were well educated and, admittedly, I used these “entertainers” and their twisted logic as springboards to discuss current events. Both kids went on to involvement with mock court and debate teams and, curiously, great colleges on scholarship! Take that Limbaugh Inc.!


Hey, nice site you have here! Keep up the excellent work!

Solar currently is 3% of the total German electricity supply, and the goal is to have it at about 20% by 2030. That is nice, but will only be a relatively modest dent in the requirements in that country. It effectively shows that although solar power is a good thing, and I do support it strongly via tax policy, the dent it will make in the use of nuclear power and fossil fuels is not real big. Hence, your statement of German solar power is misleading.

Further, was that 22 gigawatts of power a typical day? Or was it a showcase day in which the solar power was maximized for a single day?

I can anticipate the reaction to this as accusing me of being a far right wing nutcase, so be it. I have a modest carbon footprint, take a bus to work, recycle, and have a car that gets over 30 MPG, but I am realistic to know that renewable energy is still a long way down the road, and the stats you point relatvie to German support my contention

Bill Gates and Steve Jobs have changed Computer history completely. But the interesting part is who is known as father of computers- Charles Baggage did not know that he would make an important place in history with his invention. Modern computers based on integrated circuits are millions to billions of times more capable than the early machines, and occupy a fraction of the space. Simple computers are small enough to fit into mobile device, and mobile computer can be powered by small batteries. Personal computers in their various forms are icon of the Information Age and are what most people think of as "computers". It was a great invention of world history.
hydro electric
hydro electric power
what is hydro electric
inventhistory
power generator
wind power generator
solar and power
electric transportation