Sean Parnell - Killing Alaska One Species at a Time 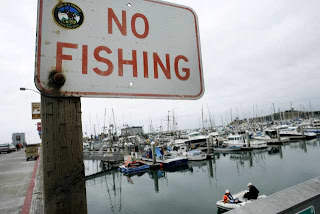 Last week, Gov. Parnell appointed a committee to deal with the collapse of Chinook Salmon.  About a decade late, and with very little in the way of muscle to get anything done.  Here's the Governor's answer to Wesley Loy's inquiry about who is on Parnell's Chinook disaster science task force:


This is a joke. Dr Fall is a subsistence expert. This time around instead of finding out why we do not have more Chinooks, Fall is simply going to argue that there needs to be more Chinooks allocated to subsistence. Look at that new proposal book in the AYK section and you will see what i mean. Volk and Clark are good guys, but know nothing about the biology issues. Asking the ADF&G staff to look for a solution to this problem is like asking the fox to look into the problem of a reduction of chickens in the pen managed by the Fox. Won't happen.


Imagine how Alaskans would react if, year after year, a Seattle-based, partially foreign-owned fleet came into the bottom of Cook Inlet, and dragged up over 75% of the salmon coming into Cook Inlet. Imagine if this fleet wasn't even there to fish salmon. Imagine if the crewmen either brought these Anchor, Kasilof, Kenai, Susitna and Deshka River-bound King salmon back to Seattle to go to the Salvation Army, or - if they needed all the space in the hold left, for more Pollock - threw the valuable Kings overboard while the observers aboard their ships were kept out of sight.

That is what has been happening in the Bering Sea for decades. It has gotten to the point that the Seattle-based trawlers are taking so much of the Yukon, Kuskokwim and other river-bound salmon in their by-catch, that there might well not even be a Yukon River season in 2009. Or 2010. Or - ever again.

Could this happen to the Kenai River? Not likely. If the salmon runs on the Kenai will die, it will be from other kinds of greed and hyper-development. We've seen how much resistance some user groups of the river and property along the river have taken to sound policies and initiatives designed to improve salmon habitat.

But now, three and a half years later, we have the disaster many had predicted.

Do I think the Parnell administration is capable of handling the Chinook sustainability problems rationally?  Of course not.

A better question is - does anyone? 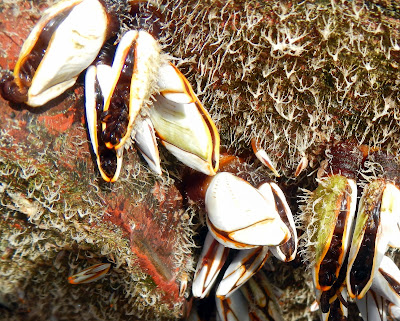 Speaking of Cook Inlet, concern about invasive species coming into Alaska and into Cook Inlet from drilling rigs and other uninspected vessels is growing.  Yesterday, Public Employees for Environmental Responsibility issued a press statement:


As the Department of Interior permits offshore oil exploration in the Alaskan Arctic, they may also be “permitting” the introduction of invasive species to Alaska.  Invasive species impacts analyses were removed from federal environmental reviews for offshore exploratory permits, according to documents posted today by Public Employees for Environmental Responsibility (PEER).  The prospect of invasive introductions continues to loom as a real danger with experts warning that “many gaps remain in the current strategy to prevent marine species transfers” into Arctic waters.

Last week, a jack-up drilling rig brought to Alaska’s Cook Inlet from Singapore, may also have brought invasive mollusks attached to the rig’s legs. Alaska Fish & Game officials have requested samples from the drilling rig’s owner, as the state wildlife agency has limited authorities to inspect the rig.  Principal responsibility for preventing non-native species from being introduced by ships rests with the U.S. Coast Guard, but this apparently infested rig passed a Coast Guard inspection.


And today, Cook Inletkeeper follows up with more information (received by me in an email), fairly damning of Parnell administration policy in this regard:


After transport from Singapore, Buccaneer Oil Corporation is storing its jack-up drill rig - the Endeavor - in the state-established Kachemak Bay Critical Habitat Area.  Although the management plan for the Kachemak Bay CHA prohibits the storage of drill rigs, the Alaska Department of Fish and Game changed its policy last year, arguing the rig is not "stored" in the CHA unless its legs are lowered into the substrate.

The Kachemak Bay CHA supports important salmon and halibut fisheries, among others. Past studies by the Smithsonian Environmental Research Center have identified roughly a dozen marine invasive species in the area. Earlier this year, the Army Corps of Engineers cited Buccaneer for failing to obtain needed permits for seismic blasting operations around the world famous Kenai River."

"PEER has done important work showing the blind eye federal agencies have turned on invasive species in oil and gas operations," said Bob Shavelson, Director of Advocacy for Cook Inletkeeper.  "Now its time for the State of Alaska to stand up and protect the fisheries and habitats that support countless Alaskans. Independent testing for possible invasives on the rig should occur immediately, and the state should adopt rules to ensure this never happens again."

The Parnell administration will go down in history as the worst of all time, in regard to confronting increasing perils to our resources from a growing array of assaults, some natural, many man-made.
Posted by Philip Munger at 12:04 PM

"This time around instead of finding out why we do not have more Chinooks, Fall is simply going to argue that there needs to be more Chinooks allocated to subsistence. "

That's an easy one. To get more Chinooks, just raise the price. More kings will magically appear. Economic theory says so! :-p