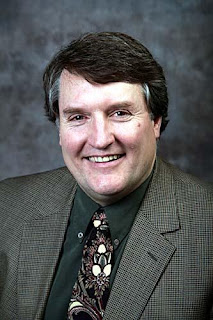 I know, Harry Crawford isn't running for the U.S. Senate. He's up against Rep. Don Young. But I doubt when Nate gets around to looking at AK-AL, he'll give Harry much chance, unless the FBI comes knock-knock-knocking at Don's door. And if that happens soon, Harry will have company in the August Alaska Democratic Party primary.

Silver gives the optimum number of seats the Democrats will retain the day after the 2010 election as 53 or 54, counting Joe Lieberman and Bernie Sanders. That's a loss of five. Silver was right about last week's Massachusetts special election - as close as anyone in the country.


Here's a graphic from the article linked to above: 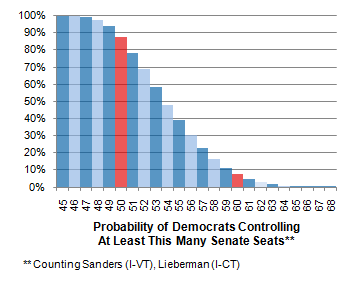 Posted by Philip Munger at 5:22 PM

so a guy who used to analyze baseball stats for a living, switches to numbers crunching political races, gets a few of his 'predictions' right, and now he's the darling of the pundit class.

If he's so fail safe and fool proof, how could he have failed to predict all the Oscar winners when he tried his hand at that ?

Believing in every new prognosticator that comes along isn't a very intelligent method of forming opinions.

Or is it that one would rather echo the rationalizations of others in the pundit realm rather than attempt their own analysis?

O/T Can a juror be accepted if they work for a corporation which funds a political point of view. I think the law community is going to have to look more closely at this. This problem is getting bigger every moment.

Does this mean everyone who works for GE should be disqualified from serving on jury duty, because they own NBC, and MSNBC,and CNBC, all of which could be argued as having a "political point of view"?

That seems a bit farfetched in terms of a "problem".