Would Alaska Be Fertile Ground for Industrial Hemp? 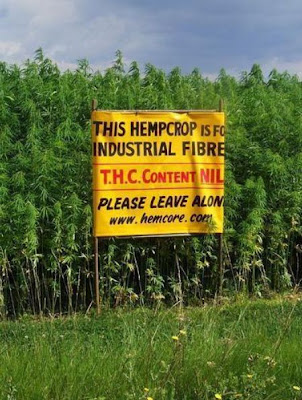 When I was a teenager, my Boy Scout troop tied 20-foot-long, 1/2-inch-thick hemp lines for the longshoreman's union to raise money for our hikes and other trips.  The scoutmaster called it "Manila hemp."  It had been the standard tie-down line for cargoes brought on to freighters for oceanic voyages for centuries.

A decade later, in 1973, when I first came to Alaska, I became enmeshed in commercial fishing in Cordova.  There were hemp lines here and there, but plastic and nylon line ruled.  Eventually, hemp disappeared.  It was weeded out of the mix of materials used as rope and thread.  The Federal government, state governments and international bodies made it hard to grow industrial hemp, even though it is unusable to get one high, as is methanol alcohol to get one drunk.  It became illegal to grow non-THC hemp in the USA.

Last November, Colorado and Washington legalized marijuana for use as a mind-altering substance by their citizens.  They are now drawing up the framework for people to grow, market, distribute, sell and use THC-embedded products to smoke, drink, eat, rub on your body or otherwise use.

Colorado also legalized the growing of hemp for use as an industrial product that doesn't use THC.  Hemp fiber and hemp oil are valuable commodities worldwide.

Alaska has been reputed to be a place where marijuana grows well in the long days of summer. In the world of MJ used to get one high, an indoor, controlled environment is best to assure a quality product at this high northern latitude, though.  Even in summer.

But industrial hemp could take advantage of our long spring and summer days, to produce large plants at high yields per acre.

Why? If you are growing hemp for rope or paper (the fibers)why would you grow it as a seasonal crop in a extreme climate? The beauty of the plant is that it reseeds itself and grows all year in moderate climates. Wasn't the original ban created by newspaper/lumber baron W.R. Hearst touting his messy pulp mills? The plain states would be far better suited for hemp crops. Stick to that which you do best which is...?

Mr Phil. Getting a hemp strain to seed might be a challenge. We do have stinging nettle which does quite well here on the Kenai. It is a fine strong fiber and i am working on local production. Rhetting the fiber may prove a challenge for our climate. With some help i will attempt again this summer. AKjah.