The Rite of Spring Turns 100 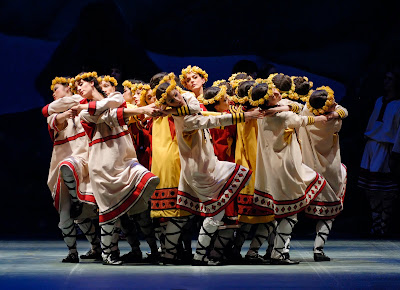 What may be the single most influential musical composition of all time, Russian composer Igor Stravinsky's le Sacre du Printemps, premiered in Paris on May 29th, 1913.  The music, and its starkly iconoclastic ballet choreography by Vaslav Nijinsky so jarred many audience members, it produced an unprecedented demonstration, considered by many to have been "a riot."


[T]here is general agreement among eyewitnesses and commentators that the disturbances in the audience began during the Introduction, and grew into a crescendo when the curtain rose on the stamping dancers in "Augurs of Spring". Marie Rambert, who was working as an assistant to Nijinsky, recalled later that it was soon impossible to hear the music on the stage. In his autobiography, Stravinsky writes that the derisive laughter that greeted the first bars of the Introduction disgusted him, and that he left the auditorium to watch the rest of the performance from the stage wings. The demonstrations, he says, grew into "a terrific uproar" which, along with the on-stage noises, drowned out the voice of Nijinsky who was shouting the step numbers to the dancers. The journalist and photographer Carl Van Vechten recorded that the person behind him got carried away with excitement, and "began to beat rhythmically on top of my head", though Van Vechten failed to notice this at first, his own emotion being so great.

{The premiere's conductor, Pierre] Monteux believed that the trouble began when the two factions in the audience began attacking each other, but their mutual anger was soon diverted towards the orchestra: "Everything available was tossed in our direction, but we continued to play on". Around forty of the worst offenders were ejected—possibly with the intervention of the police, although this is uncorroborated. Through all the disturbances the performance continued without interruption. Things grew noticeably quieter during Part II, and by some accounts Maria Piltz's rendering of the final "Sacrificial Dance" was watched in reasonable silence. At the end there were several curtain calls for the dancers, for Monteux and the orchestra, and for Stravinsky and Nijinsky before the evening's programme continued.

Although the ballet went on to become accepted by audiences as both dance and as a concert work, Nijinsky's unique choreography disappeared after the 1913 Ballets Russes season, until it was reconstructed for the Joffrey Ballet in the 1980s, by a team led by Millicent Hodson.  There have been several other choreographic interpretations of Stravinsky's music and scenario, and the publisher estimates the ballet has undergone 150 productions worldwide since its composition.

Le Sacre's influence on composers during nine decades of the 20th century, and into this one, has been substantial.  What Stravinsky did in the music, was to combine new harmonic ideas, bordering on atonality, with a rhythmic freedom which was unprecedented, all portrayed symphonically by a very large orchestra of 110 players, with a huge rhythm section.  In terms of composers' approach to rhythmic units, there is BLS and ALS (Before Le Sacre and After Le Sacre).  American composers as diverse Aaron Copland and Frank Zappa described encountering the work's jagged sonic and metric vistas as having changed their lives.

In a brief period of time, less than a decade, when the shock of new music was represented by Richard Strauss' sensually depraved Salome (1905) and Arnold Schoenberg's atonal Pierrot Luniere (1912), Le Sacre stood out.  Because it led so many composers and other musicians in so many searches for freedom of expression, in so many different ways, I regard it as the most influential composition, not just of the 20th century, but of all modern history.

Here is the definitive performance of this masterpiece in the original (reconstructed) choreography.  The orchestra and dancers of the Kirov Ballet are directed by Valery Gergiev:
Image by dalbera under Creative Commons license
Posted by Philip Munger at 11:36 PM

Phil, I rarely submit a comment here, but in the occasion of La Sacre's 100th, I must.

This is a work I came across on an LP in my teens. I hadn't knowledge of it other than my confession of Disney's film use; I did, at least, know the composer's name. When I put this on the turntable and dropped the needle to the vinyl, little did I know a deep engagement would impact my life as it did.

It was, and still remains, a point of departure for how I saw the world. A pre and post sort of dichotomy representing a watershed moment in developmental aesthetics... a silly little fluff of music changed my life.

I began listening to a new world of 20th century chamber works, of then reading contemporary philosophy, of viewing the arts with new interest. I became a modern sceptic and a person capable of questioning the culture I found myself as a musician, as an American, as a struggling gay boy who no longer wanted to be someone's instrument in an orchestra.

Maybe that day shattered my world. Maybe it set it afire. I was that talented kid who was slated to be a professional musician. All I know now is how I stood -- yes, stood -- feeling, crying, enraptured by the rhythms, the tonal-atonal melodies and thematic conflicts, the power of instinct unleashed in such pure aural form.

It was my rite of spring. What music! To life!

What a great story, J! Thanks for sharing it here.

Hearing Le Sacre had less impact on me as a young, aspiring musician than did works by composers I sought to emulate - Shostakovich first, then Arnold Schoenberg and Anton Webern. However Le Sacre stretched my ears more than any other single musical composition.