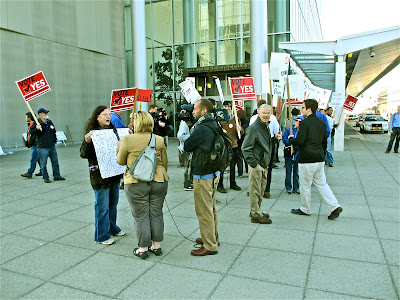 There was a distinctly heavy police presence at the Dena'ina Center on Tuesday.  One black Anchorage Police Department car circled the building several times, at one point photographing the 60 or so demonstrators, peacefully milling around, greeting each other, cheering and listening to speeches by current and former Alaska legislators. 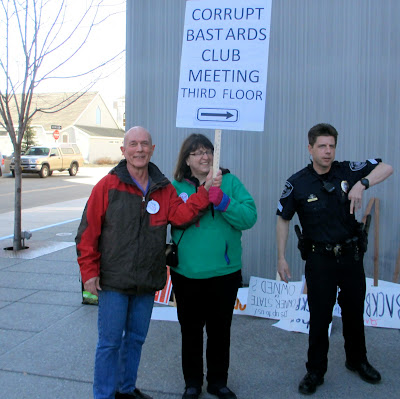 At one point, I entered the building to use a restroom, and greeted two APD officers, who said "Hello" back.  But other officers refused to acknowledge my greetings.  The black car eventually settled into an alleyway, where an officer seemed to glower at us for several minutes. 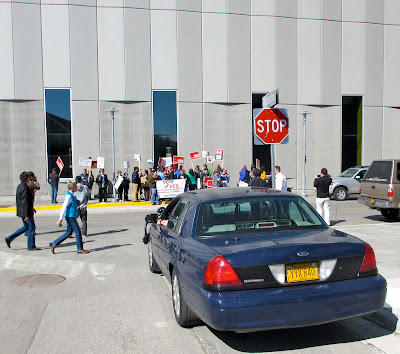 Others were photographing the demonstrators, either from across 7th Avenue, or from the edges of the crowd.  One of those taking many pictures of us was KFQD Big Oil apologist, Dave Stearin, who apparently posted some on the right-wing radio station's web site.

Jeanne Devon from The Mudflats recorded some of the speeches, and has posted them at the web site and on Youtube.

Posted by Philip Munger at 7:41 PM

I didn't feel that they were tempting to intimidate us. I thought about it more in terms of police agencies becoming more in thrall to the rituals of the national security state, and obligations to support corporate-friendly moves by government that are almost routinely objected to by citizens who feel this works against our interests and common sense.