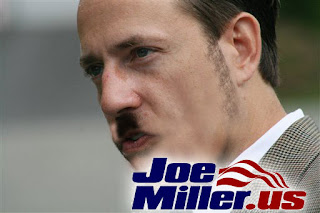 From the Juneau Empire:


Joe Miller has filed paperwork indicating he has raised more than $5,000 for a possible run for the U.S. Senate seat held by Sen. Mark Begich in the 2014 election.

Miller could not be reached for comment on whether the filing indicated a run for that office, or whether he is just continuing to explore that option.

Miller, of Fairbanks, lost the Senate primary in 2010 to a write-in campaign by U.S. Sen. Lisa Murkowski during a three-way race for that seat. He announced via a widely-reported email last month that he had launched an exploratory committee.

The form filed by Miller early this month indicates some level of fundraising has begun. The candidate designated Citizens for Joe Miller, with Treasurer Bernadette Koppy, as his campaign committee.

News reports on the filing, including an article in politico.com seeming to state that Miller is running, set some political sites abuzz. Miller’s own site, joemiller.us, Tuesday afternoon contained a column penned last month discussing a possible run.

At politico.com, one person commented "Joe Miller vs Sarah Palin, for the right to be crushed by Mark Begich. I can hardly wait."

The last time an Alaska GOP Lt. Governor ran in a GOP primary was 2008, when Sean Parnell ran against Rep. Don Young.  It was the closest race Young had been in since the 1990s, in a November contest against Valdez Mayor John Devins.  I suspect Miller will get enough outside support to conduct a fairly credible campaign.

But who is going to support him in Alaska?  Against Treadwell, Alaska GOP-friendly corporations and in-state PAC's will mostly back Treadwell.  If the Alaska GOP central committee ever sorts out its key-to-the-office and other such problems, what emerges will be a fractured structure.  If Treadwell's supporters can help patch that up, the spinoff might be enough to raise money and conduct grassroots organizational campaigning that intersects with Party tradition and old school solidarity.  If that happens, he will handily beat Miller.

I doubt Palin will enter this race.  She isn't perceived to be engaged in Alaska and our issues anymore, in any meaningful ways.  Even by the Alaska GOP.

Posted by Philip Munger at 9:25 PM