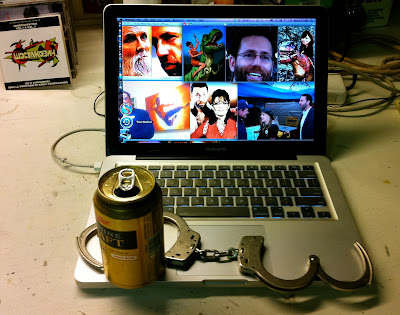 Alaska's most bizarre political figure since John Lindauer made the news today.  Last Friday, he lost what may be the biggest wrongful withholding of public records lawsuit in Alaska history:


The amount of the award -- nearly $100,000 combined -- is among the highest ever assessed in Alaska in a suit over wrongful withholding of public records, [Alaska Dispatch attorney John] McKay said.

When a party wins a lawsuit in Alaska state courts, they are generally entitled to recover 20 percent of their legal fees. Unique circumstances allow a judge to award a much higher amount.

“Mr. Miller unreasonably ran up the cost of this litigation for both the Dispatch and the Borough,” McKay said. “After we got the records released, he refused to let the Dispatch out of the case unless it gave up its rightful claim to fees as the winning party and made the Dispatch incur more and more unnecessary fees, using this as leverage. The judge correctly rejected this tactic, and the Dispatch should be credited for setting an example by resisting such intimidation.”

I have no idea how much Miller himself spent on this lawsuit. Erik Hill, at the Anchorage Daily News, took a photo of Miller last Friday, flanked by two of his attorneys, Thomas van Flein and Michael Morley, two very pricey lawyers, who don't usually serve their clients for free. [see comments below.]

Miller has formed an exploratory committee for the 2014 Alaska U.S. Senate race, along with Lt. Gov. Mead Treadwell.  No doubt Treadwell, along with Sen. Mark Begich, are delighted to see Miller get back into the news this way.

Miller hasn't yet made up his mind on how to deal with the setback:


Reached via email Sunday, Miller spokesman Bill Peck said Miller and his staff had yet to see the judge’s ruling.

Miller would be a fool to pursue this further, so he probably will.

To me, this case illustrates how much Alaska is the biggest small town in the world.  I've had two encounters with Joe Miller.  One was in early September 2010, when he confronted me outside the Mat-Su Democrats' booth at the Alaska State Fair, yelling at me, and pounding a sign with information about him, with his umbrella.  Here's a picture of the encounter: 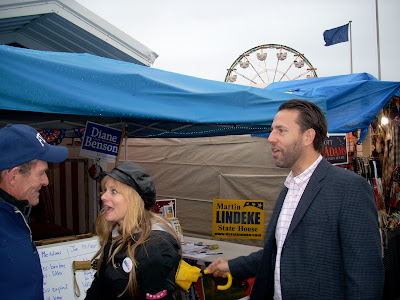 The other was a few weeks later, when I bumped into him leaving the downtown Anchorage Hotel early in the morning, accompanied by the same "friend" he's with in the above picture.  I've never written about the second encounter before. I doubt I ever will again.

Soon after the 2010 election, Ray Metcalfe, the genius behind the current referendum to repeal SB21's big oil giveaway, and I, bought the handcuffs (seen at the top of this article) that had been used to cuff Alaska Dispatch reporter Tony Hopfinger at a Joe Miller rally, from Bill Fulton, the man who "arrested" Hopfinger at that event.  We gave them to Tony.

John McKay, the attorney who just won this suit, is currently writing lyrics for a song cycle I hope to compose for soprano Mari Hahn.
Posted by Philip Munger at 10:22 AM

"Miller would be a fool to pursue this further, so he probably will." - Great line!

the photo you linked to was taken three years ago, not last Friday.

Do you mean the photo of Miller with his attorneys?

Yes sir-- or that is the way I interpret the text of the caption . . . "as the Alaska Supreme Court hears arguments on the results of the U. S. Senate race Friday afternoon December 17, 2010 at the Boney Courthouse in downtown Anchorage."