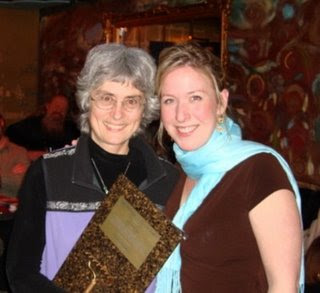 Alaska's preeminent environmentalist, Riki Ott, will be on Shannyn Moore's KUDO - AM talk radio program this morning, from the beginning of the program, just after 11:00 a.m. Alaska time. Ott will be discussing the apparent continuing use of Corexit and other dispersants in the Gulf of Mexico.

Progressive Alaska has covered the use of dispersants there more than any other Alaska blog. Ott was already the world's leading opponent of dispersant use, and expert on their dangers before the ongoing spill (or spills), and her knowledge about them has grown immensely, as BP and the U.S. government have sought to hide both the amount of application being administered, how and where it is being done, and - most importantly - the widening toxic effects of the criminal use of these products.

Here's a link to the article at The Mudflats. It is powerful, persuasive. It will be ignored. Here is how Dr. Ott's letter to Coleman begins:

During the August 25 Dockside Chat in Jean Lafitte, LA, it came to our attention that the federal agencies were unaware — or lacking proof — of the continued spraying of dispersants from Louisiana to Florida. Further, the federal agencies were woefully ignorant of the presence of subsurface oil-dispersant plumes and sunken oil on ocean and estuary water bottoms. We offer evidence to support our statements, including a recently declassified subsurface assessment plan from the Incident Command Post.

But first, you mentioned that such activities (continued spraying of dispersants and sinking oil) — if proven — would be “illegal.” As you stated, sinking agents are not allowed in oil spill response under the National Contingency Plan Subpart J §300.910 (e): “Sinking agents shall not be authorized for application to oil discharges.”


image - Riki and Shannyn in less troubling times - PA
Posted by Philip Munger at 7:36 AM

I know YOU know Patrick from Gates, I'm just reposting this EVERYWHERE this morning.

He has a very important warning for ALL today:

From Patrick at PalinGates, which is out of Germany. These people know exactly what is happening here:

I have witnessed in Germany in 1992/93 how a racist "mass rage" can spin out of control.

This kind of mass rage can easily happen again in other places as well. All you need is an incident, a reason to ignite the flame. There seems to be already a broad base of people in the USA who are heavily prejudiced against Muslims, and we have seen the first "incidents" against Muslims. What would for example happen if a Muslim "hits back" and hurts a "white person?" Wouldn't that give people a reason to "strike" against the Muslims?

That's why Glenn Beck's and Sarah Palin's game is so dangerous: If you whip up the masses, you might as well see some (unwanted?) results.

Thanks for all you do!

I think it's too late Anonymous 8:10 the Muslims already pulled off a murder of 3,000 people in 2001. Can't say I've seen much here in the USA to account for attacks on Muslims. I've see a lot of ass kissing when it comes to Muslims and they aren't the ones doing the kissing.