Joe Miller, Trying to Make Up for Morning Tweets, Sends Series of Tweets to Palin and Beck

Apparent Alaska GOP primary U.S. Senate race winner, Teabagger Joe Miller, after being caught this morning in a bizarre tweet comparing incumbent Sen. Lisa Murkowski to a hooker, seems to be trying to get back into the good graces of somebody this afternoon. I've managed to get hold of this series of tweets from Joe to Sarah Palin, that were mysteriously pulled within seconds of having been sent from Miller's blackberry. Apparently, they relate to Palin's scheduled appearance on Saturday at Ground Zero of the American civil rights movement's 1960s era battles for equal rights for America's people of color.

From the text of some of the tweets, it seems that Miller is more aware of the historical context of Palin and Beck speaking at the Washington Monument on the 47th anniversary of Dr. Martin Luther King's "I have a dream" epochal oration than are either Beck or Palin. Palin left college in Hawaii because there were too many brown people. She consistently treated minorities condescendingly in Alaska during her self-aborted term as governor. She tweeted merrily away in defense of Dr. Laura's racial insults in early August. She has supported Miller, and seems to want to take credit for Miller having taken the lead in this long count election, and will no doubt send coded words during the address at this sacred ground to her devoted acolytes, worshippers and followers. Beck, just today told reporters that the fact that he and Palin are speaking at the Ground Zero Monument on this hallowed day is a mere "coincidence."

Maybe that's what pushed Joe Miller over the top. Here is the Progressive Alaska exclusive set of tweets emanating from Miller's blackberry in the cab of a totally wrecked pickup truck in Fairbanks:

Ground Zero Monument rally supporters: doesn't it stab you in the heart, as it does ours throughout the heartland? Peaceful Teabaggers, pls refudiate

this was followed moments later by:

Will Sarah and Glen express US lingering pain&ask Teabaggers for tolerance by discouraging 8/28 rally while they celebrate making another $million tonight?

He's getting hot. Next was:

Governor, Beckster, should you or should you not hold a rally steps away from where MLK spoke to 200,000 people? Your position?

We all know that you have the right to do it, but should you? This is not above your pay grade.

Governor, did you encourage Beck to accept David Duke's offer of land by a hanging tree in Louisiana or outside a motel in Nashville if you move from hallowed ground at Washington mnmt?

by this time, maybe Joe Miller was getting frustrated, with steam coming out from underneath the hood of his wrecked pickup truck:

Governor, why are you so set on marking an area w/Beck-hate from what you described, in agreement with many, as "hallowed ground"?

Then, Joe sent just one more bizarre tweet, as the police wanted to get his statement at the accident scene:

Later in the day, when confronted by reporters on this flash of disappeared tweets, Miller's campaign blamed it on the stress of the accident, uh - too little sleep, uh - a junior staffer who has since resigned.

Meanwhile, Sarah Palin has retired for the night, dreaming, once again, of reloading: 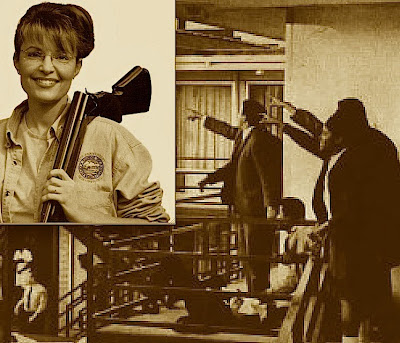 Posted by Philip Munger at 6:48 PM

Excellent! I love it. Brilliant.

Sarah and Todd are scratching their heads and armpits trying comprehend this mocking series of tweets but perhaps how it makes them look stupid.

Levity, respect, statesmanship and maturity are not qualities these asshats appreciate.

Palin doesn't have enough sense to realize that the 8/28 rally will not only offend Dems(which she loves to do) , but will offend Repubs and Independents as well--and using Dr King's niece as cover won't change that.

What a hateful person Palin is--evil beyond belief.

Thanks Phil. I was waiting to see what you would say on all the goings on today. Miller was so bent about Ester an Beck he farted in public. Well he will be spinning wheels for awhile about that one. Looking in my manual about how to crash a campaign.
Yup i think he has covered all the basics.

Bless you Phil! If you would be so kind as to fix the name in paragraph 3 as I would love to tweet a link to this throughout the Destroying Honor hate fest.

What is up in Alaska? I thought if you rear-end someone you are at fault. Period.

I was with you on the satirical tweeting, mate. But you lost me with the picture. Would you please take down the offensive photo mash-up? You do realize that the figure lying on the floor is the dying Dr. King? Thanks.

Maybe the cops gave Miller a break, but his insurance co. won't. Every rear-ender is the fault of the car hitting you in terms of insurance.

BTW, did anyone see Miller tweeting those? Maybe it WAS the aide...or a twitter-nymph.

Can't imagine Miller coming through with something like those.

Damn, I was hoping for some more hypocrisy from Miller.

Send this to the Huff Post for publication NOW...

1) I certainly WILL NOT take down the image of Palin and Dr. King.

Phil, Don't take the picture down. It speaks volumes.