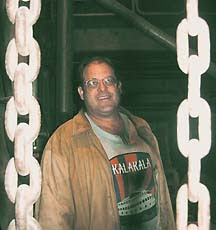 The world's most important forensic imagery bronze sculptor opens a retrospective exhibit Wednesday in Spokane, Washington. Acceptable Losses will be shown in the gallery at Spokane Falls Community College from October 21st through November 19th.

Peter Bevis' bronzes, created in situ at oil spills, mass moose killings, wolf carcass piles and other fairly horrific sites, have taken a back seat to other matters for the past fourteen years. In the intervening time, the iconoclastic sculptor got drawn into a decade-long effort to save the old ferry boat Kalakala from its demise at Gibson Cove on Kodiak Island. And other distractions.

Here's an excerpt from an article in Spokane's weekly, the Pacific Northwest Islander, by Leah Sottile, on the exhibit:

Pete Bevis carries around body bags. He needs to be prepared, because he creates art out of dead, exploded, bloody and decomposing corpses.

Creating art that is a little bit memorial and a little bit protest, Bevis casts the carcasses of splattered cats, mangled raccoons and car-hacked moose in bronze. In the end, they are alloyed portraits that hang in art galleries. 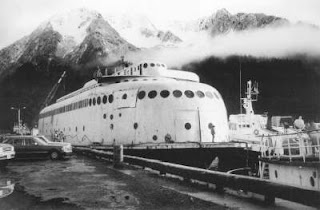 Through the 1990s Peter Bevis and I collaborated on many art projects, and I helped a bit on the Kalakala project. Collaboration with Peter has led to the creation of six musical works. In 1999, Peter and I brought the tug boat Ruby XIV from Kodiak to Seattle for restoration. The trip resulted in my Piano Concerto.

For the 1993 exhibit at Anchorage's International Gallery of Contemporary Art, Peter asked me to create a long soundscape. As the main feature of the show was the bronzes he had created in Anchorage and Seattle of animals killed in the Exxon Valdez oil spill, I commissioned Alaska poet, Ann Chandonnet, to write an epic poem, called Shadows.

For the first time since the original Anchorage exhibit of Peter's "Spill Kills," the Spokane exhibit will feature Ann's poetry and my music.

Here is Ann's 1993 poem, based on actual statements made by people involved in the Exxon Valdez oil spill and its aftermath, in 1989. I believe this is the first time it has been printed on the web.

If you click on the title of each poem, it will take you to a link where you can play the music, with Ann reciting the poem. Shadows is dedicated to Anchorage environmentalist and oceans activist, Rick Steiner:


2. The Places of Animals

surﬁng seals
Breaker, breaker.
No matter where you went it was black.
The pearls that were their eyes.
Thereʼs a feeling of insult when a bird comes in just sopping with oil.
A feeling of insult.
No question about it.
It was so gross.

No matter where you went it was black.
We cried a lot.
People would come up and say,
“We just canʼt catch any more birds,”
and break out sobbing.
Itʼs beyond imagination.
The pearls that were.
I have wounds all over my hands from loons.
Once, I set a tape cassette on a rock, and the rock began to crawl away.
It was a seabird caked with oil.
A cormorant broke a hole in its breast trying to get clean.
Itʼs beyond imagination.
Slippery, dead.
It was so gross.
We cried a lot.
The red eyes of loons.
We have to deal with birds, so weʼve got these tree huggers taking care of
them.

$89,000 to save one sea otter.
Whatʼs an animalʼs life worth?
The rock began to crawl away.
It was so gross.
A cormorant holed her breast (single hull).
Deer curled up.
The only way we could identify a lot of the birds was by their beaks.
Single hull.
$89,000 to save one otter.
We have to deal with birds, so weʼve got these tree huggers.
No one wants to disturb the goose thatʼs laying the golden egg.
I have wounds all over my hands from loons.
By their beaks you shall know them.
By the wounds.
By the stench.
Washing rocks, one by one.
Whatʼs an animalʼs life worth?

Sharp beaks of tools.
Wounds all over.
Sad is too mild a word.
Slippery memories.
The limit of our memory wounds us.
Hundreds of variables wound us.

Sharp beaks of tools.
Hammers, the hiss of molten steel.
Itʼs Valdez back.
And weʼre going to be here awhile.

Our memories are short.
Itʼs the limit that frightens me.

This silence,
this feeling of insult.
Hundreds of variables bumping into rocks.
Thousands of scenarios.
Memoryʼs slippery,
So we forget.
Their pattern of behavior is one of denial.

Sad is too mild a word to say for what we are losing.
Hundreds of slippery variables.
Denial.
Forgetting.
Forging ahead.
The limit of our memory.

Sad is too mild.
Stings your eyes.

Hauled out, curled up.

Sharp beaks of tools.
Stings.
Organism against mechanism.
The single hull against the double helix.
Awake?
Shadows of seals surﬁng.
A cormorant tearing its own breast, wanting to be clean.
Sad is too mild a word.

Waves of memory: welding things together,
breaking them apart.

Sharp insult.
Denial.
Denial.
The limit of our memory.
Sad is too mild.
Stings your eyes.
Hauled out, curled up.
Sharp beaks of tools.
Stings.

Organism against mechanism.
Single hull against double helix.
Awake? Are we awake?
Shadows of seals surﬁng.

Curled up.
Some otters were blind. They swam around bumping into rocks.
Curled up, dark waves, dark rocks.
Run, hurry!
We need a permit to save otters,
but Fish and Wildlife has put us on hold.
They deny there is an emergency.
Deny.
Brain damage.
The die is cast.
No question about it.
These gorgeous mountains in sunlight,
but there is this silence.
No emergency.
The die is cast.
Run, hurry!
On hold.
Welding things together,
breaking them apart.
Run, hurry! Itʼs bad!
On hold.
No one wants to disturb the goose thatʼs laying the golden egg.
Well, the otters would survive as a species,
so why worry about a few individuals?
Their cries like the cries of human infants.
Curled up, breaker, breaking.
We worked with our hands. This hastened the healing.
You know, otters are a lot like kids.
Some liked squid.
Others wanted shrimp and clams.
Some wouldnʼt eat their haddock.
Itʼs bad.
Scoters and golden-eyes. Curled up.
Why worry about a few individuals?
The ottersʼ plaintive cries,
their tender paws,
mothers cooing to their pups.
Some like squid.
Some wouldnʼt eat their haddock.
Scoters and golden-eyes, ravens.
The rock began to crawl.
No emergency.
350,000 birds.
Got these tree huggers to deal with….But Iʼll keep
them in line.
Brain damage.
No emergency.
And if you want to say youʼre notiﬁed.
Over,
350,000 birds.
1,016 sea otters.
An undetermined number of seals and whales.
350,000 birds, including 151 adult bald eagles.
Going to be here awhile?
Itʼs a matter of when—again.
Youʼre notiﬁed.
Breaker, breaker.
Over.
Over.
Yeah.
Should be.
Over.

Posted by Philip Munger at 7:34 AM

I took a sculpture class at Portland CC in 88. The instructor, Rick True, talked about casting dead animals too. He asked his students to bring in any dead animals they might find. Interesting...