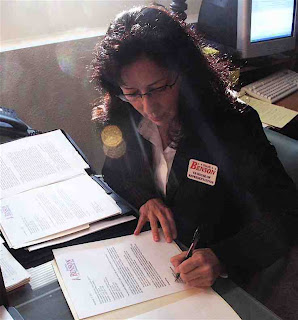 The Washington Post is reporting that a memo has leaked from a low-ranking staffer on the U.S. House Committee on Standards of Official Conduct. It indicates that over 30 members of the House are under the secretive panel's scrutiny. First, this article:

House ethics investigators have been scrutinizing the activities of more than 30 lawmakers and several aides in inquiries about issues including defense lobbying and corporate influence peddling, according to a confidential House ethics committee report prepared in July.

The report appears to have been inadvertently placed on a publicly accessible computer network, and it was provided to The Washington Post by a source not connected to the congressional investigations. The committee said Thursday night that the document was released by a low-level staffer.

The ethics committee is one of the most secretive panels in Congress, and its members and staff members sign oaths not to disclose any activities related to its past or present investigations. Watchdog groups have accused the committee of not actively pursuing inquiries; the newly disclosed document indicates the panel is conducting far more investigations than it had revealed.

Shortly after 6 p.m. Thursday, the committee chairman, Zoe Lofgren (D-Calif.), interrupted a series of House votes to alert lawmakers about the breach. She cautioned that some of the panel's activities are preliminary and not a conclusive sign of inappropriate behavior.

"No inference should be made as to any member," she said.


Rep. Jo Bonner (Ala.), the committee's ranking Republican, said the breach was an isolated incident.

The 22-page "Committee on Standards Weekly Summary Report" gives brief summaries of ethics panel investigations of the conduct of 19 lawmakers and a few staff members. It also outlines the work of the new Office of Congressional Ethics, a quasi-independent body that initiates investigations and provides recommendations to the ethics committee. The document indicated that the office was reviewing the activities of 14 other lawmakers. Some were under review by both ethics bodies.

Although the article cited above doesn't mention Rep. Don Young, another article in today's WaPo does that:

The House ethics committee sought information from Rep. Connie Mack (R-Fla.) regarding a $10 million earmark in his district that connects Coconut Road near Fort Myers to Interstate 75.

A document obtained by The Washington Post shows that the committee requested information from Mack and expected a response by Aug. 28.

The congressman said in a statement released Thursday by his office that the inquiry does not focus on him and that he had no involvement with the project.

"We've been told that we may be a witness to an investigation of others, but we are, of course, not the subject of any investigation," the statement said.

The highway project, which local officials did not back, benefited a Florida developer who gave thousands to Rep. Don Young (R-Alaska), who at the time headed the House Transportation and Infrastructure Committee.

I call upon Representative Stephanie Tubbs Jones of Ohio, Chairwoman and Representative Doc Hastings of Washington state, Ranking Republican Member of the United States House of Representatives Committee on Standards of Official Conduct to consider opening an investigation into the conduct of Representative Don Young of Alaska in the matter of the insertion of an earmark for a major Don Young contributor into House legislation after that legislation had passed Congress. This change, unprecedented in nature, appears to be unethical in the most obvious sense of that term.

Under the rules of the House Committee on Standards of Official Conduct, the general public, and particularly, constituents of a possibly unethical Member may inquire to the committee on matters such as this, and request that you consider the matter, to wit:

I am requesting at this time that you proceed with determining the background of this insertion so that your committee can then decide whether or not an investigation of Representative Don Young on the insertion of this highly unethical legislative item is the most appropriate course for your body to undertake.