A Planet-Wide Explosion of Religious Nutcases - The Human Race, Facing Possible Extinction, Reaches for Help in All the Wrong Places 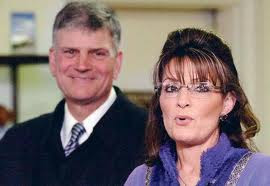 An extremely unhinged Alaska schemer, anointed against witchcraft by a real witch hunter, has hundreds of thousands of twitter followers, a million facebook friends.

The USA's headlines are dominated by inane arguments (see all 7,000 articles from the past 24 hours!) about a religion-based community center in lower Manhattan.

The son of Billy Graham jumps to reinforce hatred toward the president.

Soldiers at our stateside military bases are disciplined for refusing to attend Christian fundamentalist events on base.

The examples seem to be endless.

Where has our sanity gone?

If all this nuttery was happening in some kind of vacuum it would be bad enough. But here we are, facing a serious global environmental catastrophe reaching the point of no return, and all our large-scale information inputs are consumed with jibberish not much more advanced than what Aztec priests must have uttered to justify tearing the hearts out of their trophy victims.

Why isn't memeorandum linking to the outcry about misinformation on the BP Gulf disaster, instead of the mosque bullshit?

Why aren't more media stories directed toward the acidification of the oceans, which is approaching the point of irreversibility?

Why can't we somehow unite as a nation to build a green economy that creates long-term employment for our kids, their kids and so on?

My lifelong belief that there are redeeming aspects of religions which somehow outweigh their obvious shortcomings diminishes day by day, almost hour by hour, as I watch the hatreds of fundamentalists from most faiths combine with the greed of their adherents to consume the last vestiges of intelligent life from our presence.

I haven't figured out yet why rational religious leaders have so much less sway than the demagogues.

Is there a way out of this maze?

Posted by Philip Munger at 1:59 AM

Thank you for putting into written words what I feel every day. I post stories to my FB in hopes to open peoples eyes and keep them informed beyond what these hear and see see from the MSM, I donate money, I sign petitions, I call my senators and reps as well as send them emails...and yet I am beginning to feel it's a losing battle when i hear that the percentage of Americans that believe Pres. Obama is Muslim has increased from 12% to 18% in the last year. That it even matters what religion he belongs to is sad i itself, but that people are being persuaded to believe, against all of the overwhelming evidence, that he belongs to a religion that many have deemed "evil" is just depressing and tragic.

I hope you'll cross-post this at FDL. People are too willing to dismiss Palin as a flake. People need to realize how dangerous she is.

Phil- I have no clue but here is something I've been looking at and thinking about...
which may yield some ideas...

mocha- whatzername IS a flake, a dangerous flake... she fits right into a belief system far too many Americans rely on to explain the world around them...
It is the worldview which needs examination... how and why have so many, many people abandoned the broader community for lil patches of fundamentalist fear?
alaskapi

Thank you for posting this commentary. I went into the link regarding the Army punishing men for not attending a spiritual event...an event paid for with US Taxdollars:
"Headlining acts like BarlowGirl cost tens of thousands of dollars, and researchers with the MRFF later discovered that the Department of Defense has awarded multi-million dollar contracts for consultants behind spiritual fitness events."

Since Palin wears her Down Syndrome child on her lapel and her appeal to "Quiverfull" (evangelical women who do not use birth control and fear not having a Down Syndrome child....usually older women still breeding) I wonder if the military has been invaded by this mindset. Think about the free healthcare, subsidized housing, child alottments, etc.....all on the stupid taxpayers dime. Might makes right you know!

I wish someone would look into this possibility.

Televangelists like Graham bilk millions of people out of money by using the fear factor.....point in fact my mother-in-law who pays her way to salvation by going without her needs to eke out dollars for these 'blackmailers'.

She's in her 90's and when I asked if ever a Muslim has knocked on her door to convert or ask for donations, she gave that blank stare of incomprehension.

For people like Graham, Palin & those 24/7 televangelist networks it's all about the money and they will say and do anything to keep the flow coming.....

This reminds me of something I read about Easter Island and how, as the Islanders'population grew and they cut down all the trees and killed of all the larger mammals, their religious monuments got bigger.

Jared Diamond's question was "What were they thinking when they cut down the last tree?" Jay Hanson's rhetorical question is: "What are YOU thinking right now?"

There may be something that is about to happen to throw Fundie/repubs into a "tither". David Duke, white supremist,former KKK, has a video up at YouTube and on his website--David Duke for President 2012--leaving it up to the people who follow him( like the number 1 hate site.). He says he may run as a Republican , or 3rd party, and is supported by many in the tea party.

If this should happen, many Repubs and fundies will be lumped with him--not for his religious beliefs?--but as a Repub. He could upset their apple cart and steal away votes because there seem to be so many haters now.

The msm isn't covering this but they should. He seems to be working under the radar. I remember his hatefulness from years ago, and it was awful.

Graham seems to significantly other to the Palins and Alaska. His outfit, "Samaritan's Purse," has a Soldotna camp from which they do good deeds throughout the state (e.g., helping Toksook Bay after the fire a couple of years ago and Eagle after last year's flood) all the while wrapped in the flag and proselytizing as they do so.

I've never posted here before, but I've been an atheist for more than 40 years. The state of our country disheartens
me. I used to think we could overcome are evolutionary past, but now I am not so sure. I have to remind myself that we are merely a speck in the universe. That's what so many people don't realize…in a hundred years who will remember any of this? Who knows what will survive after we are gone.

They don't seem to care about what Christ said on the subject...

But I tell you: Love your enemies and pray for those who persecute you, that you may be sons of your Father in heaven. He causes his sun to rise on the evil and the good, and sends rain on the righteous and the unrighteous.

"Blessed are the peacemakers, for they shall be called sons of God.

"But love your enemies, and do good, and lend, expecting nothing in return; and your reward will be great, and you will be sons of the Most High; for He Himself is kind to ungrateful and evil men.

"But I say to you who hear, love your enemies, do good to those who hate you,

But Jesus was saying, "Father, forgive them; for they do not know what they are doing." And they cast lots, dividing up His garments among them.

"BUT IF YOUR ENEMY IS HUNGRY, FEED HIM, AND IF HE IS THIRSTY, GIVE HIM A DRINK; FOR IN SO DOING YOU WILL HEAP BURNING COALS ON HIS HEAD." (NASB ©1995)