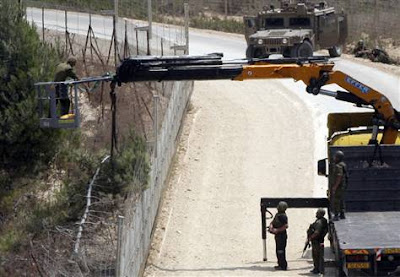 The Lebanese Army (not Hizbollah) responded with warning shots, then with live fire. The Israeli counter-reasponse apparently killed three Lebanese soldiers and a reporter. A sniper from the Lebanese side of the border then killed "a high-ranking Israeli officer.

The Israelis are now responding with heavy artillery and rocket fire, as well as white phosphorus. Numerous Lebanese soldiers and civilians have been injured in the exchange, which is probably escalating to include Hizbollah rockets, as I write.

Here's the longest report on this I have found yet, from Iran's Press TV, not always the best source, to say the least:

UPDATE - Wednesday 7:00 a.m: According to information coming out late Tuesday, the Lebanese not only fired first (as reported above), but the "pruning" operation - according to the IDF - had been announced to Lebanese forces and to UNIFIL in advance. If that is the case, the Lebanese Army, not the IDF, violated UN Resolution 1701.

Posted by Philip Munger at 8:36 AM

For all of you who say "Israel is our ally...", answer this simple question:

Exactly when was it that Israeli troops fought alongside Americans?

Anonymous, you are the type that would bitch no matter what Israel has done...am I not right?

Phil,
I hope you enjoyed the crow, was it raw or did you BBQ it first?

What was that you said? Oh, you were reporting the only thing you knew about? I know Phil...you are just a good man doing his "Israel is full of evil Jews" duty.

Maybe you want to post the truth at the top of your false headline...instead of as an after note where no one will see it. Might help to wait to find out the whole truth before automatically accusing Israel. Typical.