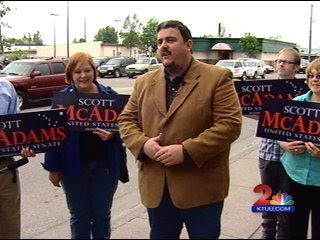 
Did I ever love Michael Chabon's book, The Yiddish Policemen's Union!

And until this week, that's all I-- or most Americans from the Lower 48 who haven't cruised Alaska-- knew about Sitka, Alaska. I know a lot more now because Sikta's mayor, Scott McAdams, won the Democratic nomination for the U.S. Senate seat currently held by super-corrupt ex-Senator/Governor Frank Murkowski's appointed daughter Lisa. (Yeah, ole Frank appointed her when he left the Senate to become governor.)

Anyway, the Beltway Democrats didn't think much about Alaska because they figured Lisa had a lock on the seat. Bob Menendez at the DSCC had been absolutely wrong about everything since he started running that show and, right now, it looks like Murkowski was defeated by radical right teabagger Joe Miller-- the Sarah Palin candidate who ran on an anti-Choice platform (with an anti-Choice referendum on the ballot to pull the loons out to the polls).

We won't know who won the GOP nod until Tuesday, when the dog sleds bring the last of the ballots in for counting but Miller is around 1,700 votes ahead of Murkowski and Murkowski is threatening to run as a Libertarian spoiler. Which means this is now a key race.

So while the DSCC wonders if they can somehow maneuver perennial loser Tony Knowles onto the ticket instead of McAdams-- or perhaps the brilliant Menendez can figure out how to get Cal Cunningham to be the candidate-- actual Alaskans are uniting behind McAdams with great enthusiasm-- and for all the same reasons the DSCC is so uninterested.

McAdams isn't a conservative corporate shill and isn't interested in enriching himself at the public's expense. The DSCC doesn't know how to deal with that kind of candidate.

Our most dependable correspondent in Alaska, Phil Munger, has been raving to me about McAdams for months. And this week I finally spoke with Scott on the phone. He seemed committed to a kind of economic populism that results in winning campaigns in the West. In other words, Scott McAdams is more interested in solving real problems real American families face than in staking out ideological positions.

So while his half-crazed probable opponent, nutty Mr. Miller, runs around burying guns in his backyard, Scott is talking with Alaska voters about jobs, the economy, the environment, energy and housing.

Next weekend he'll be the Blue America candidate at Crooks and Liars (Saturday 11am, PT). I hope you'll come by to say hello and hear what he has to say. Meanwhile, if you want to help him get his message out, we added him to our Senate Candidates Worth Fighting For page.

And if you want to prepare for next week's session, here's an extensive interview with Mayor McAdams that was done on The Mudflats early in June.

Joe Miller was on Face The Nation today. I'm not sure if he's just terribly ignorant-- on a Sarah Palin level-- or a boldfaced liar, but his vision for America could arguably work if he figures out how to turn back the clock to the 17th or perhaps 18th Century. The Law of the Jungle just won't do in the 21st-- not even in Alaska, not even if we were all to follow his lead and start digging up the permafrost and burying guns in our backyards.

This guy is clearly in a category of dangerous Know Nothings right up there with Sharron Angle, Ken Buck, Mike Lee, Pat Toomey, Ron Johnson and Marco Rubio-- the whole anti-USA Jim DeMint crowd of sociopaths and nihilists, who want to abolish Social Security, let Wall Street and Big Business "regulate" themselves, and make little things like healthcare, safe food and water and education the exclusive realm of the wealthy.


[What Howie was observing on Miller is reinforced in comments coming in on the latter's explanation of what the so-called Social Security obligation is. Miller's spewing talking points from the Teabaggers that can easily be put in their place by the McAdams campaign. Here's from one comment from the Youtube link:

Treasury bonds﻿ are nothing more than IOUs?

Someone who doesn't understand what "full faith and credit" means has no business pontificating on the nature of the﻿ Social Security Trust, and certainly has no business holding Federal office.

Posted by Philip Munger at 8:31 PM

"Achtung Baby!"
GOP = Manchurian Candidates, Inc.
It's Not Fascism When We Do It!

The editor of the Alaska Dispatch website was arrested by U.S. Senate candidate Joe Miller's private security guards Sunday as the editor attempted to interview Miller at the end of a public event in an Anchorage school.


Tony Hopfinger was handcuffed by the guards and detained in a hallway at Central Middle School until Anchorage police came and told the guards to release Hopfinger.

Hopfinger has not been charged but the owner of the Drop Zone, the private security firm that's been providing Miller's security, accused Hopfinger of trespassing at the public event, a town hall sponsored by the Miller campaign. The owner, William Fulton, also said Hopfinger assaulted a man by shoving him.