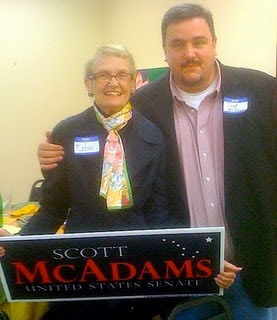 This is close enough that the victor cannot be predicted.

One should keep in mind that in the U.S. Senate race in 2008 between Ted Stevens and Mark Begich, Stevens was ahead on election night. Even a week after the election, Stevens was still ahead. On November 10th, 2008, there were still 90,635 uncounted ballots.

The day after the 2008 general, Begich was down by over 3,300 votes. He didn’t catch Stevens in the late count until November 12, almost nine days after the general. Begich went on to win by over 2,000 votes.

I’m comparing a big general election in 2008 to a state primary in 2010, but until we know how many uncounted votes there are, nobody should be declaring who the victor is in the Murkowski-Miller race.

On the Democratic Party - open ballot for this U.S. Senate race, Sitka Mayor, Scott McAdams is the clear victor, and will face either Murkowski or Miller on November 2nd. Scott is progressive, and has impressed a lot of liberals here. He attended Netroots Nation this past summer. Should Scott win, his chances of turning into a Blue Dog, as has Sen. Mark Begich - disappointing many Alaskans who strongly supported him - are nil.

Rather, Scott might easily prove to be the Alan Grayson of the U.S. Senate.

You can support Scott McAdams here.
Posted by Philip Munger at 6:45 AM

If Miller wins, who will Lisa endorse?

The larger question is why wasn't Miller exposed for his open espousal of 'the crazy'?

Without responsible political analysis and reporting, the delusional and the misinformed can't really be taken to task for their voting based on a desire to support their commonly held misconceptions.

No one stepped up to take on that responsibility.

Not the Democratic Party of Alaska, not what passes for 'the blog community', not those who claim to be 'progressives'. Nope, no one is putting in the work.

If you're surprised when insanity takes the day, you shouldn't be.

Actually, cynical residents aren’t surprised at all at these results: the information WAS out there, both in print and on-line, but the ultimate responsibility of the voter to act upon it was, as usual, the failing part of the equation. You can’t change the “mind” of someone who is delusional and who deliberately ignores facts – as has been evidenced by Alaskan political history, “the crazy” is a valuable marketing attribute that will attract like-“minded” voters.

Add to this the influence of Outside corporate money - over half a million dollars in advertising courtesy of Koch Industry puppeteers funneling propaganda through Tea Party shell groups.

And it’s all compounded by wholesale apathy: approximately 18% of eligible voters took part in this primary, and now these results by default speak for the majority of Alaskans, not the convenient whipping-post of the media, bloggers or progressives. That’s a larger answer to the question.

Looks to me like democratic candidates will take a hit in November.

it appears you've got all the convenient excuses necessary .......

As long as 'making excuses', or creating justifications trumps actually putting in the work to create change, apathy, (as you call it), should continue to be the order of the day.

.....the 'media', the self-styled 'progressives' and the so called 'bloggers' aren't above reproach.

No one gets a free ride, ...we are all culpable. We can all apply ourselves just that much harder.