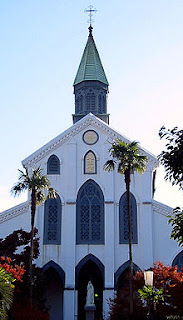 I haven't written a lot about this issue yet. Just one essay. I probably will write more soon.

Since it emerged, though, I've donated to a Jewish Center next to the Naval Academy and to the Cordoba House project. I'm tempted to donate to at least one of the Christian churches in Hiroshima and Nagasaki (one of which is pictured at top left), or to one of the Shinto or Zen Buddhist shrines or temples near Pearl Harbor. There may be more interesting shrines out there to which one could also donate.

Religious intolerance limits many things. Religious ecumenism often magnifies understandings of true spirituality and of the values different faiths share that can be uplifting. Religions, such as Buddhism and Unitarianism, which acknowledge scientific breakthroughs can have an impact on our views of what God may be are more rational than those which refuse to accept important new information.

All three of the Abrahamic faiths have been hijacked since the second half of the 20th century:

1. The combination of the blandness of mainstream Protestant faiths, the corruption of the Catholic infrastructure, along with the advent of flashy televangelist-fueled fundamentalist, charismatic and evangelical denominations, have changed what Christianity means in America, Latin America and Africa. Dramatically.

2. The huge amount of money lavished upon Saudi Arabia from their oil riches has fueled the most fundamentalist of large Islamic sects, the Wahhabis. Together with the rather fundamentalist nature of Islam itself, this has turned that faith more to the right since World War II.

3. The creation of Israel, and the erroneous equating of militant expansionist Zionism with Judaism, has brought the faith which bred many of the great Western European and American social and scientific thinkers of the late 19th through late 20th centuries to the fore, into crisis. Part of the the result has led our country into increasing support of a foreign government that is teetering on the edge of a religious fascism less strict than its Arab neighbors, but far, far more militant.

These three faiths, which represent the majority of religious believers on Earth turn more and more toward demagogues and violence, less toward reason.

I look toward young people to seek my own answers, and to find renewed faith. More on that soon.

Here are two interviews on the subject of the Cordoba House. The first is between Gov. Howard Dean and Glenn Greenwald. The second is between Sarah Palin and Greta Van Susteren. Neither is reassuring.

Greenwald's comparison of the community center battle to those of American civil rights advocates in the late 1950s and 60s is compelling. Gov. Dean fails to engage Greenwald sincerely. It's almost as if he's considering running for something.

Palin isn't challenged by Greta. As in other segments from Palin's series this week with Van Susteren, Palin's first impression on me, at the interview's start, is that she's in over her head. Although she recovers, she has to resort to a few talking points. Again and again. And she is running for something.

Two things disturbed me the most in the exchanges: Both Dean and Palin retreated into entrenched postions where they kept reiterating pap, rather than bringing out some real dialogue. And Dean kept referring to the community center issue as some sort of a "zoning dispute." Not only is that untrue, but it is similar to a term Palin used for defending the continuing expansion of Israeli settlements in East Jerusalem, which are in violation of international law.

Ecumenism is a distinctly Christian term and describes a movement which pertains to a desire for unity within 'Christian' religions.

Misapplying the term to non-Christian faiths is not only erroneous, it's specious.

You can't just take words and make up your own definitions.

Rather than appearing literate, articulate, or erudite, such ill-conceived practice results only in making you appear nescient.

Not to mention the dis-service you perform for readers who may be inappropriately misled by your misnomers.

Although "ecumenical" may have once been solely used to define actions within and among Christian churches, that has not been the case for decades. One standard definition of the term is "A movement promoting worldwide unity among religions through greater cooperation and improved understanding," which is exactly the way I used the term.

Heaven forbid anyone being "inappropriately misled by [my or] your misnomers."

What do you understand of the Greek Orthodox Church, which has been net to the WTT for many years, and it's attempts to rebuild?

Whoops it was shocking!
how 'bout this bitch!
http://j.mp/ckVSvU
principle shareholder of Rupert Murdoch’s News Corp.(Corpse), the parent company of Fox News, is Prince Alwaleed bin Talal, the nephew of Saudi Arabian King Abdullah, and one of the world’s richest men.

She is fucking insane. Train is going off the rails...