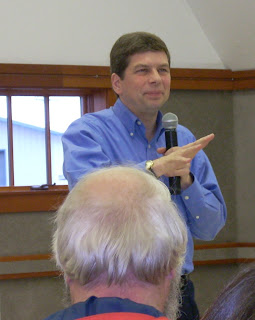 Alaska Sen. Mark Begich (D), the Department of the Interior and the United States Coast Guard all announced Tuesday that they will be investigating aspects of the New Years Eve grounding of Shell Alaska's Arctic oil drilling rig, Kulluk, on an island off of Kodiak.

Last week, Rep. Ed Markey (D - Mass), ranking member of the House Committee on Natural Resources, along with other House Democrats in the House Sustainable Energy and Environment coalition indicated they hope for a House probe:


The coalition is made up of 45 House Democrats.

"The recent grounding of Shell's Kulluk oil rig amplifies the risks of drilling in the Arctic," they said in a joint statement. "This is the latest in a series of alarming blunders, including the near-grounding of another of Shell's Arctic drilling rigs, the 47-year-old Noble Discoverer, in Dutch Harbor and the failure of its blowout containment dome, the Arctic Challenger, in lake-like conditions."

We'll see if Markey can get the GOP-controlled HCNR to formally investigate this.  I have my doubts. Alaska Rep. Don Young is a senior GOP member of the committee, and he will do everything he can to keep anything from getting in Shell's way.  However, Markey, who has let it be known he is considering a run to take Sen. John Kerry's place in the Senate, will push this hard.

The U.S. Coast Guard investigation of the Kulluk's grounding is inevitable.  The announcement today is no surprise:


The Coast Guard has ordered a marine casualty investigation of the Shell Oil-contracted drilling rig Kulluk’s Dec. 31 grounding on Sitkalidak Island, a day after it was safely towed to an anchorage about 30 miles away.

A Tuesday statement says the investigation, ordered by Coast Guard 17th District commander Rear Adm. Thomas Ostebo, will be led by a Coast Guard investigator. It will receive support and technical advice from the federal Bureau of Safety and Environmental Enforcement, as well as the National Transportation Safety Board.

We'll get to hear the crew of the Kulluk and Aiviq testify.

Within the past hour, the U.S. Department of the Interior announced it will conduct a review of Shell Alaska:


The Interior Department is launching a “high-level,” 60-day review of Shell’s troubled 2012 attempts to look for oil off Alaska’s northern coast after the company experienced a series of mishaps.

The review arrives a week after Shell’s Kulluk drillship ran aground en route back from the Arctic region, and as Interior is under pressure from green activists to block 2013 drilling off Alaska’s coast.

Sen. Begich issued a press release this morning, which links to the formal letter he has sent to Marvin Odum, president of Shell Oil USA and Admiral Robert Papp, Commandant of the USCG.  Begich issued the notice in his capacity as Chairman of the Subcommittee on Oceans, Atmosphere, Fisheries and Coast Guard.  This is from his press release:


Begich announced his intention to hold a meeting in Alaska to take a closer look at the incident, its causes and the response effort in a letter to Coast Guard Commandant Admiral Robert Papp Jr. and Shell Oil Company President Marvin Odum issued Tuesday.

In the letter, Begich reiterated how much Alaska and the nation stand to gain from development of Outer Continental Shelf resources:

“Over the past four years, I have worked closely with both of you to ensure we develop the vast oil and gas resources in the Chukchi and Beaufort seas with the highest standards for safety and environmental protection,” Begich said in the letter.

“Moving ahead with the Arctic drilling program is critical to Alaska’s economic future. While this incident notably involves marine transportation and not oil exploration or drilling, we must quickly answer the many questions surrounding the Kulluk grounding and improve any regulatory or operational standards as needed to ensure this type of maritime accident does not occur again.”

Begich's formal letter indicates he has been listening to those of us who are highly critical of Shell's handling of the routing of the Kulluk from Dutch Harbor to Seattle, and to our concerns about why equipment failed:

And, yes, Sen. Begich has been following our coverage of the grounding here at firedoglake.

This will be the second time the Alaska Senator will have held hearings on Shell's Arctic drilling problems.  Back October 14th, Begich convened a hearing on the fiascos surrounding the September testing failures of the containment dome Shell had devised for the emergency response barge, Arctic Challenger.  However, at the time, environmentalists criticized Begich for not looking more closely at what many even then felt was shoddy or criminally negligent performance by the oil giant up to that point:


Lois Epstein, Arctic program director for The Wilderness Society, said Begich didn't delve deep into those problems and others.

"It was unfortunate on the part of Sen. Begich and the committee that they didn't try to address certain things in depth," said Epstein. "For example, why did the (Noble Discover drill rig) drag on anchor? What has Shell learned from that mishap?"

Slaiby told Begich that the Noble Discoverer's dragging was quickly stopped, with tugs bringing it under control in 22 minutes.

And he described the error that led to the damaged oil-containment dome as it was being tested off the coast of Washington state earlier this month. An electrical problem led to a valve failure that forced the dome to rapidly descend. The descent was stopped before the dome reached bottom but not before water pressure damaged one side of the dome and some of the buoyancy chambers.

The containment dome was created to suck up spewing oil or gas in hoses and transport it to the surface where it can be flared off. Shell conducted a "top to bottom" review to learn from that mistake and will have the containment barge and system -- an unprecedented piece of oil-spill response hardware --- ready for Arctic drilling next year, Slaiby said.

"I strongly believe we have to be our strongest critic," said Slaiby at the hearing, adding that the containment system could be a "game-changer" in offshore exploration and should have been an industry standard for decades.

Begich's letter to Shell and the USCG indicates he is reading his mail.  One example is this email, sent to the Senator by marine environmentalist Rick Steiner, late last week:

Let me respectfully recommend that we seize the Kulluk incident to reevaluate all emergency vessel towing contingencies in all Alaska waters -- Arctic, Aleutians, and PWS. We are sorely lacking in all of this.

Thus, the Kulluk may be a real blessing in disguise -- if it helps us prevent EVOS II.

Other critical voices are coming forth.  Of interest is an article published late Sunday by the Alaska Dispatch.  Written by Cliff Mass, a meteorologist at the University of Washington, it skewers any claim by Shell that they really had a good enough weather window upon leaving Dutch Harbor on December 21st, to have plotted the journey to Seattle as they did:


Shell Oil made a misguided and poorly informed decision to move a huge drilling platform (the Kulluk) from Dutch Harbor Alaska to Seattle starting Dec. 21. As described in the Seattle Times and elsewhere the problems grew from broken tow lines and faulty engines on December 26th, to the eventual grounding the Kulluk on an island just south of Kodiak island on Dec. 31.

Anyone familiar with the meteorology of the North Pacific and the Gulf of Alaska knows that this region is one of the stormiest on the planet with one major storm after another during midwinter. Unbelievably, a Shell Oil spokesman said, that forecasts indicated a favorable two-week weather window. This is at odds with the facts.

I'm letting Sen. Begich's staff know they should consider having Prof. Mass come up for the Kulluk hearing to testify as an expert witness.

Meanwhile, the Kulluk is anchored in Kiliuda Bay, on Kodiak Island's south shore.  Why they didn't bring it all the way into the Port of Kodiak baffles me.
Posted by Philip Munger at 2:18 PM

Some how it friggin freaks me out that Mr Phil who has a full work load, Can carry an investigation better than the local PAID media. I am holding a nice cabernet for you should we get a chance to meet. AKjah.