Just How Good Are U.S. Naval Skippers in the Straits of Hormuz? Apparently, Not Very 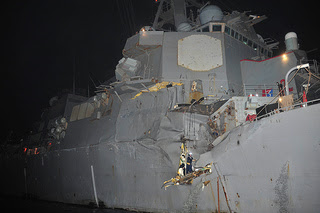 The U.S.S. Porter, DDG-78, an Arleigh Burke-class destroyer, on duty in the vicinity of the Straits of Hormuz, collided with a Japanese tanker last night:

The Bahrain-based U.S. Fifth Fleet said the Panamanian-flagged, Japanese-owned bulk oil tanker M/V Otowasan collided with the USS Porter, a guided-missile destroyer, in the early hours of Sunday.
The navy vessel remained able to operate under its own power after the collision, which was not combat-related, the statement added without elaborating on how the accident happened. An investigation was underway.
Photographs released by the U.S. Navy showed a large dent, several meters (yards) high, in the starboard side of the USS Porter just in front of the ship’s superstructure and above the waterline. Personnel hung over the side inspecting the damage.

DId they have a copy of COLREGs on the bridge?Ref for the non-OOD qualified: Section II (for vessels in sight of one another)
15. Crossing situationsWhen two power-driven vessels are crossing, the vessel which has the other on the starboard side must give way and avoid crossing ahead of her. The saying is “If to starboard red appear, ’tis your duty to keep clear”.
108,000 shaft horsepower, controllable pitch propellers, International traffic separation scheme, and CIC to back you up, and you let a tanker French-kiss your starboard side right in front of the bridge?

This is the most volatile shipping congestion point in the world.  Busy as it is, there is no excuse for a collision like this.  Ensuing confusion, combined with some random unknown involving Iranian naval units, might have launched an awful error.  Awful errors have happened before:

Iran Air Flight 655 was a civilian jet airliner shot down by U.S. missiles on 3 July 1988 as it flew over theStrait of Hormuz at the end of the Iran–Iraq War. The aircraft, an Airbus A300B2-203 operated by Iran Air, was flying from Bandar Abbas, Iran to Dubai, United Arab Emirates. While flying in Iranian airspace over Iran’s territorial waters in the Persian Gulf on its usual flight path, it was destroyed by the United States Navyguided missile cruiser USS Vincennes (CG-49). All 290 onboard including 66 children and 16 crew perished.  The incident is ranked ninth among the deadliest disasters in aviation history. It was the highest death toll of any aviation incident in the Indian Ocean and the highest death toll of any incident involving an Airbus A300 anywhere in the world.   The Vincennes had entered Iranian territorial waters after one of its helicopters drew warning fire from Iranian speedboats operating within Iranian territorial limits.

We need the highest level of competence in the Gulf and the Straits.
Posted by Philip Munger at 8:02 PM