﻿﻿﻿﻿﻿How Will the Global and U.S. Media Deal with the Gaza Flotilla's Encounter with the Israeli Navy? 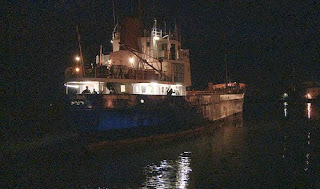 I. Were I the commodore of the flotilla of eight or nine vessels preparing to head straight from Cypress to the Gaza coast near the end of May, I'd want Joe Meadors next to me on the bridge. He's joining the flotilla. Joe's one of the survivors of the brutal Israeli attack on the U.S.S. Liberty, for which Joe's previous skipper won the Congressional Medal of Honor. Joe says "It’ll be like old home week."

I'd want Joe on the bridge of the MV Rachel Corrie with me. Along with every other living survivor of the attack on the U.S.S. Liberty, Joe believes the Israelis meant to sink a U.S. ship and somehow cover up the evidence.

The MV Rachel Corrie is not a U.S. ship, but several U.S. citizens are joining the flotilla, including two former high-ranking State Department officials:

Ambassador Edward L. Peck, who served as a paratrooper during two tours of wartime active duty; spent 32 years in the Foreign Service; including stints as Chief of Mission in Iraq and Mauritania, Deputy Director of the Cabinet Task Force on Terrorism at the Reagan White House, and State Department Liaison Officer to the Joint Chiefs of Staff at the Pentagon; and after retirement was Executive Secretary of the American Academy of Diplomacy.

Mary Ann Wright is a retired United States Army colonel and retired official of the U.S. State Department, known for her outspoken opposition to the Iraq War. She is most noted for having been one of three State Department officials to publicly resign in direct protest of the March 2003 invasion of Iraq.

Other Americans will be participating, along with hundreds of Europeans and some Turkish peace activists.

But none are as important as Joe Meador.

II. When it comes to that moment when, in international waters (as was the case with the Liberty) the flotilla, which will have been monitored since untying from Cypress by aircraft and helicopters, half the Israeli Navy and the flotilla come over opposite horizons and into view with each other, nobody can foresee what will happen next. The Israelis claim they have a right to intercept the convoy. The backers of the convoy are subject to whatever the skippers of the small flotilla deem to be most prudent as the scene rapidly unfolds. They are licensed mariners who have agreed to abide by certain rules to obtain and keep their professional credentials.

Essentially, they have to be as careful when the Israelis approach them as a similar flotilla might have to be should Somali pirates hail them on the high seas. Should the flotilla attempt to keep on steaming straight toward the Gaza wharves, the Israeli Navy has announced that it is in training for the encounter.

Will it try to pick them off one by one?

Should the large MV Rachel Corrie be used as a 21st Century ram at the head of a frantic charge, hoping that one of the Israeli torpedo or missile boats doesn't have a projectile with the word "Caterpillar D-9" painted onto its dull, deadly metal?

III. I don't know the answers. But I would like to see some of the media attention on this show that the reporters are informed enough about the context of the flotilla to give us some honest journalism.

As the flotilla passes Malta, a lot of pressure will be brought upon those responsible for the joining of vessels in the Eastern Mediterranean, to pursue some channeled plan or to disband. Will the U.S. take a role in this? The vessels are flagged at a lot of places, none of them in the USA.

The European media, which is sort of lurking around this story, will be onto it once the MV Rachel Corrie passes Gibraltar, which will be soon. The US media will ignore it as long as possible.

Three ships carrying pro-Palestinian activists have set off from Turkey to Gaza on Saturday, as part of the nine-ship 'Freedom Flotilla' convoy, a large attempt by international aid groups to breach the Israeli blockade of Gaza.

Meanwhile, an Israeli flotilla has set off from shores of Herzliya as a response to the pro-Palestinian convoy. The banners the Israeli ships carried noted Gaza rocket fire toward Israel and displayed photos of captured IDF soldier Gilad Shalit.

And here's an Irish-Palestinian video that shows images of some of the other flotila vessels, and gives a rough route map for the various vessels and a projected rendezvous somewhere south of Cypress:

So why isn't your old wrinkled ass on that boat Phil? You are wanting to see them martyred and this could be your big chance at your real 15 minutes of fame. Just think of it! Some broken down old blogger would be writing about what a dead hero you are when they weren't blabbing about flowers, their broken down friends and ex-govs ...just like you write about Corrie. And you can't say otherwise, you want to see Israel blow these bastards right out of the water so you can write another gawd awful sounding (my cat sounds better coughing up a hairball) cantata.
You left wing "progressives" are a sad and creepy lot.

Q ﻿﻿﻿﻿﻿How Will the Global and U.S. Media Deal with the Gaza Flotilla's Encounter with the Israeli Navy?

A. The media will probably ignore the whole event.

On August 5, 1958 President Dwight Eisenhower signed legislation sent to him by Congress chartering the CONGRESSIONAL MEDAL OF HONOR SOCIETY.

Web site of the Congressional Medal of Honor Society:

The only thing sad and creepy here is you,
Makabit Bat Guriel.

I'm not looking forward to them being blown out of the water aknotsobright. It's your broken down old blogger buddy Phil and his old cronies. The left have always been more militant when it comes to wanting things blown up, burnt down and murdered. All you have to do is go back 30 or 40 years right in this country to find out that much. I wouldn't want you to hurt your gray matter though...

Israel apologized for the tragedy immediately and offered to compensate the victims. Israel ultimately paid nearly $13 million in humanitarian reparations to the United States and to the families of the victims in amounts established by the U.S. State Department. The matter was officially closed between the two governments by an exchange of diplomatic notes on December 17, 1987.
In January 2004, the State Department held a conference on the Liberty incident and also released new documents, including CIA memos dated June 13 and June 21, 1967, that say that Israel did not know it was striking an American vessel. The historian for the National Security Agency, David Hatch, said the available evidence “strongly suggested” Israel did not know it was attacking a U.S. ship. Two former U.S. officials, Ernest Castle, the United States Naval Attache at the U.S. Embassy in Tel Aviv in June 1967, who received the first report of the attack from Israel, and John Hadden, then CIA Chief of Station in Tel Aviv, also agreed with the assessment that the attack on the Liberty was a mistake
In the Israeli naval museaum in Haifa there is a tribute to the US Liberty along with an apology for the incident

anon @ 8:41 - then why do all the Americans aboard the Liberty swear the attack was intentional? please go to the link I provide above at first mention of the ship's name for another, far more realistic version of the story you tell. story, indeed...

people who side with a concocted, incomplete and inaccurate portrayal of this sorry set of episodes (the attack and coverup), and against courageous survivors of the attack, are siding with a foreign government against American service men. I have a problem with that.

.....you 'have a problem' with concocted, incomplete and inaccurate portrayals, phil ?

Only when it's not your own concocted, incomplete and inaccurate portrayals, eh?

Anonymous 8:41,
I had an email exchange with James Ennes, Jr. one of the people peddling their BS about this being some sort of planned attack against the Liberty.
When I questioned Mr. Ennes on whether or not he would ever accept a finding that it was not an intentional attack he refused to answer. He absolutely ignored the question! Period!
All he wanted me to do was go to their message board and argue my opinion all the while claiming I would lose the argument.
Well, yeah, if you want to call NOT ANSWERING THE DAMN QUESTION LOSING...another thing Phil can't do.
Phil Munger is no different then James Ennes, Jr. or this pathetic Joe Meadors. It's a mental problem when it comes down to Jews. Maybe you could call it a birth defect.
They really don't know why but the Jews are a great people to hate. The Muslims can bomb the snot out of them but in the end they will blame the Jews.
So don't ask Phil for an explanation because he has none! It's some sort of brain damage, that is the best answer I can give it because nothing else makes sense.