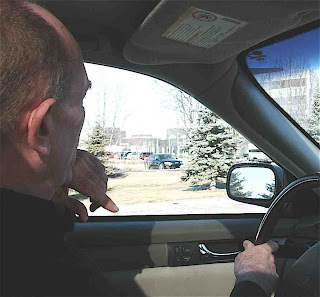 I've been meaning to take U.S. Senate candidate Ray Metcalfe's Anchorage real estate tour since he offered to show me around late last year. A number of others have taken Ray up on this too.

Before I took Ray's tour, I consulted friends who are deeply involved with the Alaska Democratic Party. Ray had been singled out by the Party's Rod McCoy for possible violation of the Party's current Party Plan. McCoy cited Article II, Section 6, which says:

Any candidate running for election as a Democrat who:

A) Publicly endorsed or supported, or whose name was published as endorsing
or supporting, the election of a candidate from another political party against a
Democratic candidate in a partisan race between the date of the last primary and
the general election; or

B) Publicly denounced a Democratic Party nominee in a partisan race between
the date of the last primary and the last general election shall be ineligible to
participate in any Democratic party caucus or subdivision meeting; serve as a
District, State, or National Convention delegate or alternate; or receive any
campaign services from the Alaska Democratic Party or any of its subdivisions or
adjuncts until after the next state convention.


McCoy was concerned that Metcalfe's articles, mailings, filings and organizational activities in the latter's ongoing campaign against past and present political corruption in Alaska were becoming a violation of the Party Plan, because Metcalfe has written about ex-Governor Tony Knowles extensively, and is known to be interested in some of Anchorage Mayor Mark Begich's activities as mayor.

But McCoy's view doesn't appear to be prevailing.

I sought advice before the tour because I'm the incoming secretary for the Party for District 13, and for the Mat-Su area. Earlier in the plan, in Section 5 of Article II, it states I could be removed from those offices for writing about Ray's comments about Begich during the tour. The advice I got is to go slowly on this.

Which is good, because the story Ray tells is way fucking complicated. And Ray has not jived me on anything. Everything I've learned from him over the years has turned out to be true.

Ray started out showing me the Jon Rubini housing units on Government Hill. Some are on base, others in a weird niche where the base fence meanders for several blocks that puts them in the city, but exempt from being taxed at their value.

Then we stood atop the downtown parking garage which is itself atop the People Mover station. We looked across 6th Avenue, over the site of the upcoming Augustine Energy building. Ray explained what he's learned so far in his ongoing parking contract investigation.

Then we went to midtown. Ray spent 20 minutes explaining the Calais Building's recent history. Then we moved further south, to the complex of Native corporation buildings Rubini leases and is continuing to build there. Then over to 36th and C, where he spent a while telling me how the FAA got moved out of the Veco Building and into this Rubini-controlled space.

We looked at a vacant lot that's been there forever on 36th, between the Loussac Library and the Frontier Building. It used to be owned by the US Post Office. Guess who just bought it?

Then we went by the possible new home of the Alaska Federal Records Depository. He described the convoluted appraisal situation on the property and how looming deadlines will force this issue back into the public soon. We looked at the extremely silly park there.

We were running short on time. I've got to go back to finish the tour. But, first, he answered another question for me, one I've had for a while - how did the strange road system between Klatt and 100th get that way. Ray's genuine. I knew some things about how that engineering miracle was achieved 20-some years ago, that I didn't share with Ray. What he said confirmed every one of them.
Posted by Philip Munger at 10:35 PM

Ray Metcalfe has taught us all to listen to him in detail. The details are hard, because they tell a story to which we should have paid more attention as it unfolded.

A couple of questions. Is the story Ray sets out different from other western towns, say Colorado Springs, or Missoula ? Pick a town. I am not implying the events are righteous because similar events have occured elsewhere - only asking if they are similar? Or, have we been notably corrupt?

Ray has served in the state legislature. He was one of the few I've seen in the Alaska legislature over the years who packaged his disgust with what he saw into something that has helped the public.

I think Ray is running because he believes he's been working the longest to get to the bottom of our own political corruption. He's running to put light on the processes both our major party's enable which either encourage corruption or discourage asking too many questions about why it occurs here on the level it does.

He knows his election is a long, long shot. But he's in this for the long, long, long haul. If he loses the primary, he will keep on doing what he does - investigate corruption of public officials.

I was talking to Jim Sykes yesterday evening about my tour with Ray. Jim thinks that Ray, like Sarah Palin, is a person who learns from experience. Jim has a lot of respect or what Metcalfe has achieved.

I know nothing of the other towns you ask about.