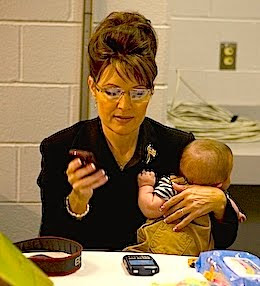 Here is the text of a letter sent to some members of the press by Don Mitchell, Andree McLeod's attorney in McLeod vs. Parnell (Palin):

As you know, for the past sixteen months I have represented Andree McLeod in two civil actions filed in the Alaska Superior Court.

The first lawsuit, McLeod v. Parnell (Palin), seeks to establish that an email that a state employee sends/receives on his/her private email account (rather than on his/her State of Alaska email account) and whose content involves the transaction of official state business is a “public record” for the purposes of the Alaska Public Records Act, and that using private email accounts to transact office state business is a per se violation of A.S. 40.25.140, which prohibits a state employee from “obstructing” public inspection of “public records.”

As the lawsuit has progressed I have been amazed (but oddly not surprised) that the Alaska press has viewed the legal issues that I am litigating on behalf of Ms. McLeod to be a private matter between Ms. McLeod and former Governor Palin, rather than something in which the Alaska press might have an institutional stake.

That disengagement was most on display when the Alaska press reported that on January 22, 2010 Superior Court Judge Patrick McKay issued a decision in which he granted the Alaska Department of Law’s motion to dismiss the lawsuit.

The cursory reporting implied that Judge McKay did so because he found that emails sent/received on private email accounts are not “public records.” In fact, while the analytical precision Judge McKay brought to his judging was wanting in several significant respects, what he said, albeit implicitly, was that such emails could be “public records” but only at such time, if at all, that the agency who employs the state employee who sent/received the emails decides to “preserve” the emails. He also implied that a state agency has total discretion to decide to “preserve” or not “preserve,” even if the decision to not “preserve” is made with bad motive (i.e., to prevent the public and the Alaska press from discovering that the emails even exist).

The reason that if any of you read Judge McKay’s decision, or read it closely, I would hope that you would have been concerned is that the undefined (by the Alaska Legislature) word “preserved” that Judge McKay defined on his own appears in the generic A.S. 40.25.220(3) definition of the term “public records” in the Alaska Public Records Act.

In other words, Judge McKay’s holding applies to all records that the executive branch of the government of the State of Alaska generates. Not just to emails or to emails sent/received on private email accounts.

I would hope that for the Alaska press that possibility might be more than a bit troubling, among other reasons because yesterday the ADN reported that (other than Mike Doogan, whose support is the kiss of death in the Alaska House of Representatives) the members of the Alaska Legislature could care less about ensuring that the Alaska Public Records Act accomplishes its intended objectives, one of which is to enable all of you to do your jobs.


[emphases added by PA. Doogan = "kiss of death," eh? Gotta love that, if for totally different reasons than those of Mr. Mitchell]
Posted by Philip Munger at 12:15 PM

I read this crap and feel for you Alaskans. It's a terrible blow to democracy when the 4th Estate (ADN) surrenders. You bloggers are now the ones to do it. Don't give up.

While ethics is an important issue, "It's not going to be very high on my laundry list of state issues to address," said Rep. Jay Ramras, R-Fairbanks, whose Judiciary Committee would be where any ethics bills might land.

"I think a lot of these issues ... would benefit from the passage of time, and likely are better issues for the (next) Legislature to take up," said Ramras, who often found himself at odds with Palin. He said he wants to focus his limited committee time on anti-crime measures.

This is simply outrageous........passage of time indeed.......let us ALL forget about the Alaska Fund Trust shall we?

Remember that one, the one that is illegal and Palin was ordered to shut down?

Ethics shmethics...who needs em, nope not here in Alaska, where the corrupt bastards club members are dropping like flies!

Thank God the "passage of time" means nothing to the "feds"

Why oh why should the legislature worry their "pretty little heads" about ethics, when, with "the passage of time" it will become so outrageously corrupt that the FBI will do your job FOR you....why indeed?

I cannot believe the attitude of these legislators!

How is it that their political career is intact?


It appears that it could be said of the politics/politicians in Alaska:

.......whoever is not completely corrupt are nothing but empty vessels, seat warmers with "no political will" WHATSOEVER!!!

What I have a problem with is this:

How the heck is the State/government going to "preserve" something that was hidden from it via the use of the non-official e-mail system?

How can something be preserved on the official system if it was never inside/ a part of the system that is to be "preserved" to begin with?

Does any one has contact info for Mr. Mitchell or Andree? This needs to be brought up to them ASAP.

Is the whole state corrupt? Legislators and the judiciary?

The only way anyone will ever see those emails is if someone hacks into that hacker's computer and gets them.

"The only way anyone will ever see those emails is if someone hacks into that hacker's computer and gets them."

I think that's been observed before, but keep bringing it up.

Is the whole state corrupt? Legislators and the judiciary?

Uh, that would be mostly in the affirmative, that's pretty much the case.

Been that way for a long time, and most of the voting Alaska public wants it to stay that way.

They, (that voting majority), are ardent believers that their interests are best served by electing representatives that they themselves aspire to emulate.

Welcome to my state.

Still whining about Doogan are ya ?

It seems that in every photo of $carah holding her baby, she is using her crackberry. That poor kid. And she had the nerve to claim that Bitney was addicted to hand-held video games. Right.