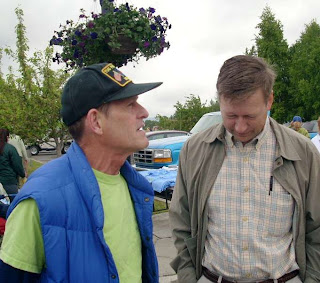 I. Parnell continues to emerge from under Palin's pile of crap she left behind.

This past week showed some important signs that the governorship of Sean Parnell may finally be emerging from some of the sleazy clutter remaining from the dismal term as Alaska's attorney general, of current Mat-Su Borough Mayor, Talis Colberg.

As soon as Colberg took office as Alaska AG, he began implementing the most secretive administrative policies regarding public access to what should be public information in Alaska history.

Early on, I sensed he might be uncomfortable in this role, but he continued to oversee every aspect of it up until his early February resignation. His legacy as AG and as public servant will always be scarred and marred by this disgusting conduct. If it weren't for galvanizing action by Alaska Natives and by Alaska's progressive bloggers, Colberg as John the Baptist harbinger, might have given way to an even more secretive Wayne Anthony Ross as Jesus Attorney General scenario.

This week, the State of Alaska has begun releasing a huge number of documents to Alaskans, based on two requests for them. The first, by GOP activist Andree McLeod, is now available online. I've posted them here. Their release quickly led to the filing by McLeod of a new request for clarification of existing state statutes regarding the mixing by public employees of their governmental and politicl activities.

The second release is ongoing. Linda Kellen's document request, largely paid for by readers at Alaska's progressive blogs, is finally resulting in the release of a number of items - memoranda, daily news summaries and other stuff. I've donated a printer/copier/scanner to Linda to help her process what promises to be an enormous amount of information.

Steve at What Do I Know? observed that another sign that the Parnell administration is departing from the Palin-Colberg paradigm of denial of information, denial of services, denial of existing major problems in Alaska and so on, is the big roll-out of the new governor's policies regarding dealing with Alaska's third-world emulating sexual violence and sexual abuse climate.

I am concerned with the emphasis on punishment and making life 'unbearable.' That sounds more like torture. Most abusers, research suggests, were abused themselves. They need to be isolated so they cannot continue the cycle of violence, but we, as a society, must recognize how such violence gets learned and how to heal the pain.

How is he going to handle the evangelical churches that advocate corporal punishment? Henkima had a long post about this in September. In addition to quoting from James Dobson's book (via Max Blumenthal's book), Dare to Discipline, which advocates corporal violence, she also cites a 1985 Anchorage Daily News article:

Prevo, whose Anchorage Baptist Temple runs the school, said corporal punishment will no longer be used on the pre-schoolers, “based on the fact it’s hard to spank and not take a chance of accidentally bruising.”

“When that happens, it puts our employees in an awkward position, and it’s not worth the hassle,” Prevo said. . .

He said corporal punishment will continue to be used at the grade school, junior and senior high school levels. [Ref #7]

Last Thursday, Sarah Palin, as she often does, reverted to her Crazy Woman persona, when, during a radio appearance on the Rusty Humphries talk show, she stated, "That weird conspiracy theory freaky thing that people talk about, that Trig isn't my real son, a lot of people say, "Well, you need to produce his birth certificate, you need to prove that he's your kid," which we have done..."

The first part of Palin's exchange with Humphries, which was about the possibility that President Obama's birth certificate might not be genuine and that the issue deserves further scrutiny, garnered a lot of attention. Within a few hours, the news aggregator site memeorandum cited 47 articles about the first part of Palin's birth certificate exchange with the talk show host, but only one link to an article that noted the falsity of the second part of the statement. Now, 36 hours later, national attention, as tracked at memeorandum, is becoming focused on Andrew Sullivan's post on this, which uses information that wouldn't be in the public domain without Sarah Palin's least favorite blogs. Sullivan's curiosity about Palin's most recent pregnancy has been long-known nationally, but the mainstream Alaska press, since the Anchorage Daily News forays in this direction ended in a stone wall, has kept well away.

Mark Milian, in the Los Angeles Times, while more critical of Palin over the first part of her Humphries statement, neglects to question the varacity of her own birth certificate claim.

Gottalaff, at the Political Carnival, while quoting Sullivan on his Palin birth certificate question, fails to really get into questioning Palin's veracity.

Riehl World View and the blog's commenters wander off to the tea party, blithely predicting Palin as next president, while dissing Sullivan.

And no, not “a lot of people say” that we need to see Trig’s birth certificate. What planet is she on? Who, besides Andrew Sullivan and the same kind of fringe kooks on the left who mirror the righty loons wondering if Obama is eligible to be president, is concerned one whit about Trig’s parentage?

but neglects to observe that Palin's claim is false.

Will Alaska's mainstream and non-progressive online mediaaddress Palin's most recent, most national lie? Checking the Saturday morning editions of all of them, the only sign of anyone noting Palin's radio appearance is a snarky, shallow post at the Alaska Dispatch by Scott Woodham:

According to comments former Gov. Palin made on conservative talk radio recently, she thinks it's fair for people to ask President Obama to provide proof that he was indeed born in the United States. While discussing the issue of what is "fair game" for press inquiry, she mentioned that some people have repeatedly asked her to provide proof that she gave birth to her youngest child. "Which we have done," she said (Andrew Sullivan must've not been invited to that press conference). She also said that ANWR is "frozen year-round," and thanked God for the leaked correspondence of climate scientists. Politico has an excerpt from the interview's transcript, as well as an embedded recording of the complete interview, here, (the birth certificate stuff happens around 9 minutes in).

Like many posts at the Dispatch, Woodham's statement has elicited no comments.

image - Phil Munger with Talis Colberg last June in Palmer
Posted by Philip Munger at 6:43 AM

Do I detect a subtle shift here? Instead of "nobody except [kooks, loons, wingnuts, etc.] doubts that Sarah gave birth to Trig," or in expanded form, "how dare you accuse her of lying, trying to humiliate her by questioning her about the intimate details of her pregnancy," now it's "nobody except [kooks, loons, wingnuts, etc.] is concerned about Trig's parentage." In other words, now that this wholesome Christian woman's reputation for credibility has gone through the floor, the defense is that the truth of the matter is unimportant, so nobody cares that she lied about it.

wv = "dedsea" The Dead Sea is located in the Holy Land and is the lowest point on earth. Fitting.

On Mrs. Palin's infamous Facebook, there is an obvious shift with increasing numbers of commenters saying 'who cares who Trig's mother is' and 'why does it matter'.
Reading between the lines, I speculate that Palin supporters are becoming more aware of the discrepancies in stories and photographs and feel some doubt themselves. But want for it not to matter.

Speaking of "Riehl World View" I linked to that site on an entirely different topic about 15 minutes ago and was promptly infected with some kind of malware.

I'm currently running malware detection software to root it out and get rid of it.

Geez, is there something that red-flags me as a progressive? :P